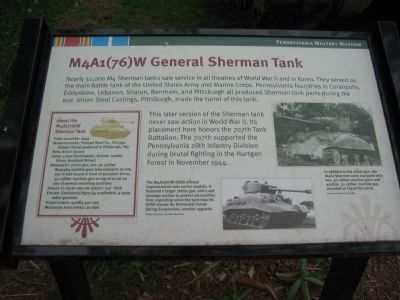 Nearly 50,000 M4 Sherman tanks saw service in all theaters of World War II and in Korea. They served as the main battle tank of the United States Army and Marine Corps. Pennsylvania foundries in Coraopolis, Eddystone, Lebanon, Sharon, Bernham, and Pittsburgh all produced Sherman tank parts during the war. Union Steel Castings, Pittsburgh, made the turret of this tank.

This later version of the Sherman tank never saw action in World War II. Its placement here honors the 707th Tank Battalion. The 707th supported the Pennsylvania 28th Infantry Division during brutal fighting in the Hurtgen Forest in November 1944.

Armor at front and on turret: 2.5" thick
Engine: Continental R975 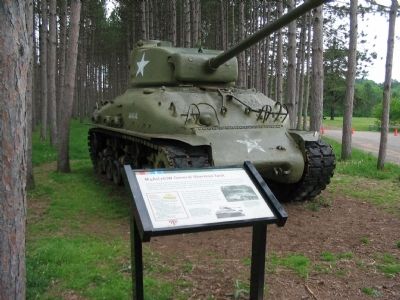 The M4A1(76)W HVSS offered improvements over earlier models. It featured a larger 76mm gun, and a wet stowage system to protect ammunition from exploding when the tank was hit. HVSS stands for Horizontal Volute Spring Suspension, another upgrade.

Topics. This historical marker is listed in these topic lists: Military • War, World II. A significant historical month for this entry is November 1944.

Location. 40° 46.824′ N, 77° 47.838′ W. Marker is in Harris Township, Pennsylvania, in Centre County. Marker is on Old Boalsburg Road, on the left when traveling north. Located near the entrance to the Pennsylvania Military Museum. Touch for map. Marker is in this post office area: Boalsburg PA 16827, United States of America. Touch for directions. 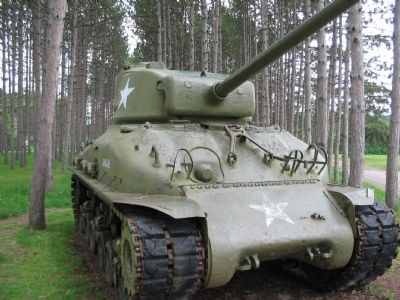 By Craig Swain, May 23, 2009
3. Front of M4A1(76)W General Sherman Tank
The assistant driver's machine gun was in a ball mount on the right front of the tank.
feet away, measured in a direct line); M59 Armored Personnel Carrier (about 300 feet away); 103rd Engineers (about 400 feet away); Twin 40mm Self-propelled Gun, M42A1 Duster (about 400 feet away). Touch for a list and map of all markers in Harris Township.

More about this marker. On the right are photos of the M4A1(76)W Sherman tank in service. 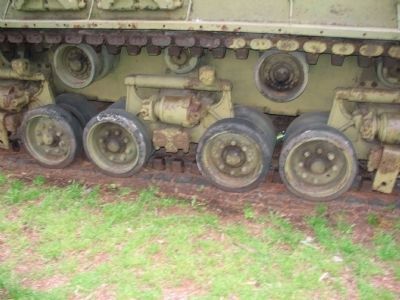