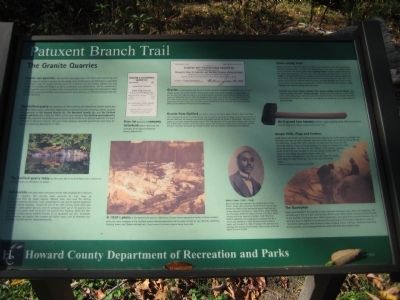 Granite was quarried in the Guilford area beginning in the 1830s and continuing until 1925 - a span of almost a century. As the nearby cities of Baltimore and Washington expanded, there was a need for quality building stone for structures and monuments. Granite was also needed for railroads and bridges, as well as curbstones and cobblestones. At first, surface outcrops of granite were cut by hand. Later, transportation and technology had improved to make commercial quarrying feasible, and many quarries were operating in Maryland-several near the town of Guilford.

The Guilford quarry was owned by the Penny family, and some of the smaller quarry pits had other local owners, who often leased them to commercial firms. At various times, quarries were operated by The Howard Granite Co., The Maryland Granite Co., and The Guilford Granite and Stone Co., operated the Guilford quarry as well as the Waltersville Quarry located in the town of Granite in Baltimore County. This joint stock company operated quarries for more than 35 years until declaring bankruptcy in 1925.

[picture of Guilford quarry] The 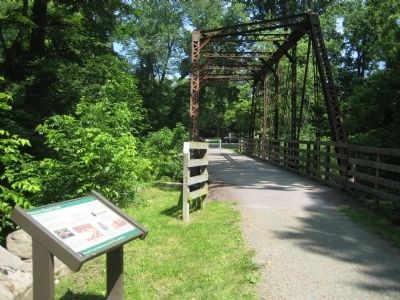 By F. Robby, June 8, 2008
2. The Granite Quarries Marker
Guilford quarry today, on the north side of Guilford Road, rests in silence as autumn leaves are reflected in its waters.

Tall derricks with great masts and booms hoisted slabs weighing 50 to 100 tons from the quarries. The derricks were powered by men, later by horses, and then by steam engines. Manual labor was used for drilling, cutting, and dressing the stone. Later, compressed air was used to operate equipment such as polishing machines. Around the turn of the 20th century, steam drills were introduced. Steam power was also used for pumping water out of the quarries, but sometimes the pumps could not prevent the quarries from flooding. When the 100-foot-deep Gulford quarry suddenly flooded, all its equipment was lost. Eventually granite became less popular than cheaper and lighter stone, such as limestone and sandstone, and the quarries closed permanently.

[images of price list and letterhead] Price list (above) and company letterhead (above right) from the collection of the Granite Historical Society, Granite MD.

[picture of Waltersville quarry] A 1920s photo of the Waltersville quarry in Baltimore County shows operations similar to those conducted by the same company at the Guilford quarry. Several quarrymen can be seen, as well as two derricks, scaffolds, hoisting boxes, and flatbed railroad cars. (Photo courtesy of the Granite Historical Society, Granite MD)

Granite is a dense igneous rock, formed as molten rock slowly cooled and crystallized. It is a mixture of feldspar, quartz, and mica (or biotite). These minerals create flecks of light and dark on a gray background, but the colors can range from black to pink. Granite sold by the Guilford and Waltersville Granite Co. was pink-toned granite, primarily from the Waltersville and Fox Rock quarries, was renowned for its beautiful appearance and use in many fine structures such as the Baltimore Customs House, Court House, old Post Office, and the Maryland Revolutionary War Monument.

Granite from Guilford was used to construct the first St. Mary's Church in Laurel, and many other buildings and houses. The B&O Railroad used this granite extensively for bridge abutments and culverts. It was also fashioned into cemetery monuments and cobblestones for the streets of Washington. Workmen in the neary city of Laurel uncovered granite curbs in 1971 that had been laid 75 years earlier along a mile-long section of Main Street. Smaller stones and irregular pieces were crushed by a stone crusher and used in road construction. However, river gravel was cheaper to obtain and soon replaced crushed granite for roadwork.

[picture of Willis J. Carter] Willis J. Carter (1857-1906). One of the men who worked in the Guilford quarries was Willis J. Carter, who came from the Richmond, Virginia, area. At first he worked at the Waltersville quarry, then was sent to be a foreman in Guilford. In 1900, Willis J. Carter became the first pastor of the First Baptist Church of Guilford, which initially met in the home of a member. Under Reverend Carter's leadership, the congregation purchased land for a church and cemetery in 1903. Reverend Carter served as a pastor until his death in 1906. He became the patriarch of a distinquished Howard County family.

Stone-cutting Tool. Various tools were needed for splitting, cutting, and working the stone into useful sizes. Hammers, weighing from as much as 25 pounds down to as small as 2 pounds, served various functions. The heavy double-faced spalling hammer roughly shaped the stones; the lighter face hammer, with one blunt and one cutting end, squared the blocks; the sledge or striking hammer drove wedges or struck drills; the ax or pean hammer had two cutting edges; the cavil had one pointed and one blunt end; the reel had a short handle and a long flat head for trimming stones; the bush hammer was made of several steel plantes for producing a smooth stone surface; and the light, 2-to-5 pound hand hammer was used for striking hand-held tools.

Also used were various chisels, pointers, drills, tracers, wedges, picks and droves - any made by a local toolmaker, Thomas Murphy. Because the hard granite quickly dulled points and cutting edges, the tools had to be sharpened often. The blacksmith was kept busy heating the tools in a forge fire, and shaping and tempering the cutting edges for each workman.

[picture of a hammer] An 8-pound face hammer used for roughly squaring stones. Note the blunt end and the sharp end. (Collection of Beverly Griffith of Granite MD).

Jumper Drills, Plugs and Feathers. Large blocks were broken up by drilling small holes spaced a few inches apart in a straight row. The holes, less than an inch in deameter and a few inches deep, were made by striking the top of a foot-long "jumper drill" with a hammer. As each blow was struck, the drill rebounded slightly, enabling the man holding it to rotate it a fraction of an inch before the next blow. Into the hole, two "feathers" were inserted - tapering pieces of iron that were rounded on one side and flat on the other. A "plug" or steel wedge was placed between them and driven in with a sledgehammer until the rock split. Note the row of holes along the edge of the split rock at the lower left of the photo. (Detail of the Waltersville quarry photo, Granite MD)

[closeup picture of the Waltersville quarry]

The Quarrymen. Hardy men labored in the quarries at work that was strenuous, noisy, dusty and dangerous. The workday was 7 a.m. to 5 p.m. with an hour off for lunch. Often, family members delivered lunch to the workmen. During the early 1900s stonecutters were paid $4 per day and laborers only 17 cents per hour. In addition to employing local quarrymen, the company imported as many as 130 skilled stonecutters from Scotland, Wales, England, France and Italy. Workmen lived close to the quarries, and purchased food and necessities from the company store.

Location. 39° 9.936′ N, 76° 50.456′ W. Marker is in Columbia, Maryland, in Howard County. Marker can be reached from Old Guilford Road 0 miles south of Guilford Road when traveling south. Marker is on the trail near the parking lot, on the south side of the restored bridge of the Little Patuxent River. Touch for map. Marker is in this post office area: Columbia MD 21046, United States of America. Touch for directions.