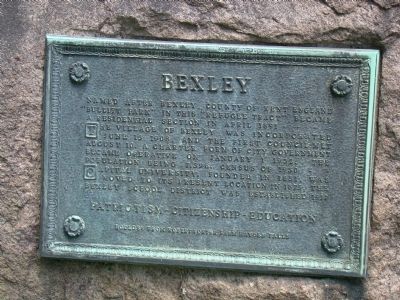 By J. J. Prats, June 20, 2009
1. Bexley Marker
Inscription.
Bexley. . Named after Bexley County of Kent, England. “Bullitt Park” in this “refugee tract” became a residential section in April 1891. . . The Village of Bexley was incorporated June 13, 1908, and the first Council met August 10. A charter form of city government became operative January 1, 1932, The population being 7,396, census of 1930. . . Capital University, founded in 1851, was moved to its present location in 1875, the Bexley School District was established 1917. .
Patriotism . Citizenship . Education . Boulder from Robert Porter Farm, Hayden Falls.. . This historical marker is in Bexley in Franklin County Ohio

Named after Bexley County of Kent, England. “Bullitt Park” in this “refugee tract” became a residential section in April 1891.

Location. 39° 58.187′ N, 82° 56.26′ W. Marker is in Bexley, Ohio, in Franklin County. Marker is at the intersection of Broad Street (U.S. 40) and Drexel Avenue, on the right when traveling west on Broad Street. Marker shares the boulder with the Camp Bushnell tablet. Touch for map. Marker is in this post office area: Columbus OH 43209, United States of America. Touch for directions.

Other nearby markers. At least 8 other markers are within one mile of this marker, measured as the crow flies. Camp Bushnell (here, next to this marker); Bexley World War II Memorial (a few steps 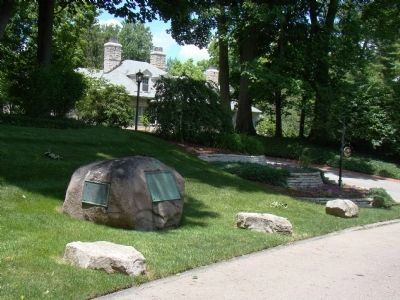 Also see . . .  Bexley History. “Urbanization began in 1876 when Capital University moved from the Goodale Park area to its present location in Bexley. Professors and their families soon began to move east, build homes, and enroll their children in the Pleasant Ridge School. For the next twenty years, this small community remained relatively unchanged. Then, in 1898, with the outbreak of the Spanish-American War, the region became a part of military history. The area around Broad and Drexel was chosen by Governor Asa Bushnell as the assembly site for three weeks for the eight thousand Ohio volunteers headed for Cuba. The extended sewer and water lines for the soldiers at Camp Bushnell made the area ripe for real estate development. Improved turn-of-the-century trolley and car travel increased the number of those interested in living east of Alum Creek in what would become the Village of Bexley.” (Submitted on July 4, 2009.)