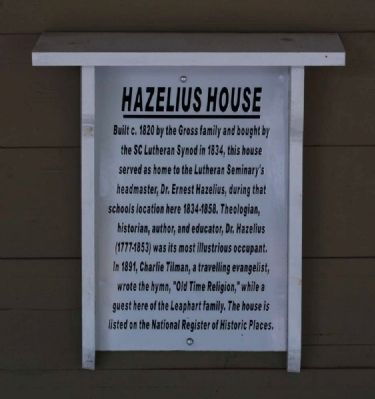 By Brian Scott, August 22, 2009
1. Hazelius House Marker
Inscription.
Hazelius House. .
Built c. 1820 by the Gross family and bought by the Lutheran Synod in 1834, this house served as home to the Lutheran Seminary's headmaster, Dr. Ernest Hazelius, during that school's location here 1834-1858. Theologian, historian, author, and educator, Dr. Hazelius (1777-1853) was its most important occupant. In 1891, Charlie Tilman, a traveling evangelist, wrote the hymn, "Old Time Religion," while a guest here of the Leaphart family. The house is listed on the National Register of Historic Places.. . This historical marker is in Lexington in Lexington County South Carolina

Built c. 1820 by the Gross family and bought by
the Lutheran Synod in 1834, this house
served as home to the Lutheran Seminary's
headmaster, Dr. Ernest Hazelius, during that
school's location here 1834-1858. Theologian,
historian, author, and educator, Dr. Hazelius
(1777-1853) was its most important occupant.
In 1891, Charlie Tilman, a traveling evangelist,
wrote the hymn, "Old Time Religion," while a
guest here of the Leaphart family. The house is
listed on the National Register of Historic Places.

Topics. This historical marker is listed in these topic lists: Arts, Letters, Music • Churches & Religion • Education • Settlements & Settlers. A significant historical year for this entry is 1820. 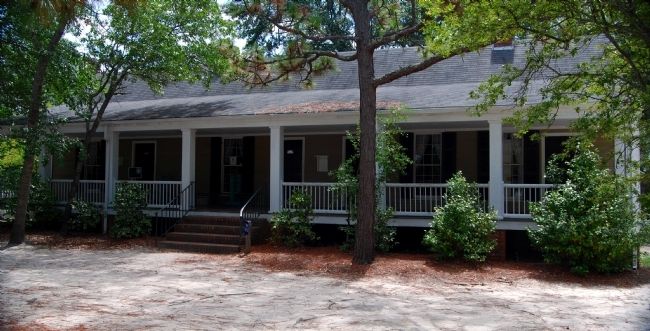 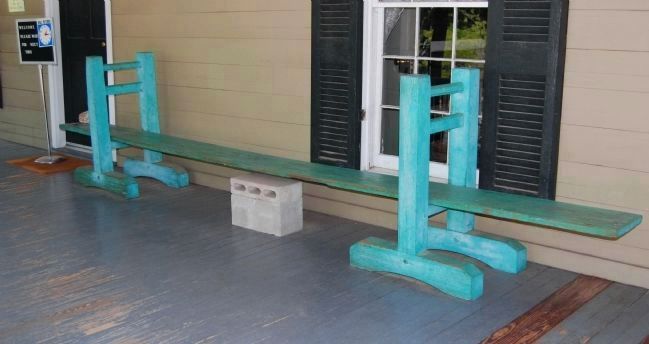 By Brian Scott, August 22, 2009
3. Joggling Board at the Hazelius House
Popular in the lowcountry, joggling boards served several purposes: to provide entertainment for toddlers and children, to provide a safe "courting" location for young couples, and help with the settling of food in adults. All this by gently bouncing on the board.
a popularizer of the gospel song. (Submitted on August 27, 2009, by Brian Scott of Anderson, South Carolina.)

3. Old Time Religion. (Give Me That) Old-Time Religion (and similar spellings) is a traditional Gospel song dating from 1873, when it was included in a list of Jubilee songs—or earlier. (Submitted on August 27, 2009, by Brian Scott of Anderson, South Carolina.)

Additional commentary.
1. Ernest L. Hazelius House
Exterior
Built of native heart pine, this one-story house (ca. 1830) is set upon low brick pillars. The gabled roof extends in sheds above the veranda in front and above the addition in the rear, both transversing the breadth of the house. Supporting the roof of the veranda are seven square columns with very simple capitals. While the exterior walls of the gable ends and the rear facade are original, the original shiplap of the veranda facade is now covered with narrow clapboard. (see surroundings for additional information) There are two interior chimneys and one exterior single-shouldered chimney on the west gable end. All chimneys are corbeled and capped. 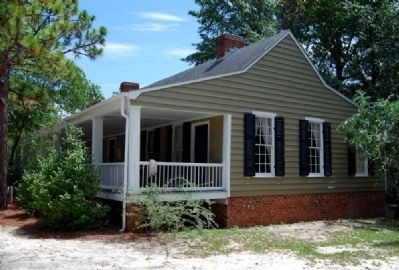 By Brian Scott, August 22, 2009
4. Hazelius House
across the rear. The front rooms have fireplaces with simple paneled friezes and narrow mantels. Window shutters and closets were added and the rooms papered in 1835. The wide-boarded floor is original and intact.

Surroundings
The Hazelius House was placed on the National Register May 11, 1973. Originally located at 225 Columbia Avenue, it was recently moved to avoid destruction. This structure was moved approximately 300 feet (across US 378) to the Lexington County Museum complex. Originally located on a tract of land given by Lexington Village to the Lutheran Theological Seminary, the Hazelius House has been relocated on land which also belonged to the Seminary. Located in the Museum complex, the Hazelius House is across the street from the Fox House (National Register property and now the Lexington County Museum) and adjoined by two other structures which are being restored.

If the Hazelius House had not been moved, it would have been destroyed. A four lane highway is eventually planned for Columbia Avenue, and the Hazelius House sat only 20 feet from the present sidewalk. That same property is involved in an unsettled legal estate; however, the heirs to the property gave the Hazelius House to the museum with the understanding that it be moved. The condition of the house is fast deteriorating. By moving the structure, it is now in a position to be restored.

Plans for the Hazelius House include immediate stabilization and then restoration.

The porch had deteriorated to such an extent that it had to be removed; it will be reconstructed. The addition to the rear was also removed; there are no plans to replace it. The Hazelius House is to be used as an activity building; however, Dr. Hazelius' office will be furnished in period style.

Architecture
The house is an example of the modest dwelling built by the German-Swiss settlers of Lexington County in the first half of the nineteenth century. It is a derivation of th~ha11-and-par1or house prevalent in the 1820s and 1830s from Pam1ico Sound in North Carolina through eastern Georgia. Seemingly ordinary in appearance, the house does, however, reflect a knowledge of the simpler Greek revival motifs, particularly in the paneled mantels, the use of capita1ed Columns, and the horizontal emphasis.

Religion/Philosophy
The house was occupied from 1834 until 1853 by Ernest L. Hazelius, a clergyman of the Lutheran Church, academician, philosopher, author, and educator. He was born in Silesian Prussia on 6 September 1777, descended from a line of Swedish clergymen. His mother had been an acquaintance of Catherine II of Russia and when the boy was orphaned, his adoption by the empress was narrowly averted. In 1800, Hazelius emigrated to the United States, was given a license to preach, and was sent to Pennsylvania to teach in a Moravian school. His first three pupils became bishops of the Moravian Church. In 1809, he resigned his position and became Lutheran.

Later in the year, he was given a pastorate in New Jersey. While there, he wrote a life of Martin Luther (1813). In 1824, Haze1ius received the degree of Doctor of Divinity from Union and Columbia colleges. In January of 1834, he became professor of theology in the Classical and Theological Institute of the Synod of South Carolina at Lexington, South Carolina, and remained there until his death in 1853. His years as professor of theology in South Carolina's most predominantly Lutheran section exerted a strong influence upon the Lutheran Church in the United States. (Source: National Register nomination form.)
— Submitted August 27, 2009, by Brian Scott of Anderson, South Carolina.
2. About Ernest Hazelius
Ernest Lewis Hazelius (6 September 1777, Neusiz Prussia-20 february 1853, South Carolina). Education: Moravian school in Neisky. Career: Pastor and theological professor: Moravian Seminary in Nazareth, PA, 1800-8; pastor of united congregation, Hunterdon County, NJ; professor, Hartwick College, 1815-30; professor, Gettysburg Seminary, 1830-33; professor, Southern Seminary, 1834-43.

Ernest Hazelius came to the United States from Germany as a Moravian but soon returned to the Lutheran Church of his Swedish ancestors and served it as a teacher. His parents having joined the Moravian seminary in Nazareth, Pennsylvania. Despite his advancement in that institution, he discerned that his views of church government and discipline did not coincide with those of his colleagues. For this and other, personal reasons he resigned his position and withdrew.