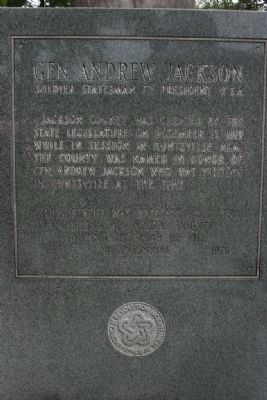 Jackson County was created by the State Legislature on December 13, 1819 while in session in Huntsville, Ala. The county was named in honor of Gen. Andrew Jackson who was visiting in Huntsville at the time. This Statue was presented by the Citizens of Jackson County during the year of the Bicentennial 1776 - 1976

Topics and series. This historical marker is listed in this topic list: Government & Politics. In addition, it is included in the Former U.S. Presidents: #07 Andrew Jackson, and the The Spirit of ’76, America’s Bicentennial Celebration series lists.

Location. 34° 40.35′ N, 86° 2.04′ W. Marker is in Scottsboro, Alabama, in Jackson County. Marker is on East Laurel Street near South Broad Street (State Route 279), on the right when traveling east. Located on the Jackson County Courthouse grounds on the East Laurel Street side. Touch for map. Marker is in this post office area: Scottsboro AL 35768, United States of America. Touch for directions.

Other nearby markers. At least 8 other markers are within 10 miles of this marker, measured as the crow flies. Robert Thomas Scott (here, next to this marker); Jackson County Courthouse And The Scottsboro Boys 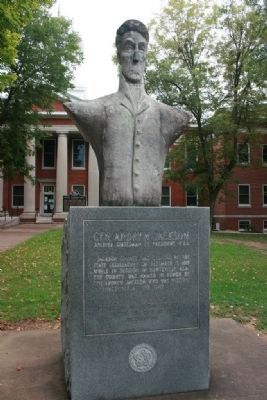 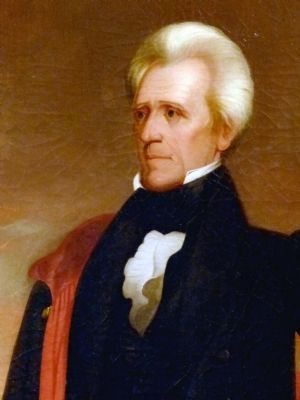 “With the possible exception of Abraham Lincoln, no nineteenth-century president wielded his powers more aggressively than Andrew Jackson, which is confirmed by his use of the presidential veto over Congress. Unlike his predecessors, who invoked that power on strictly constitutional grounds, Jackson vetoed key congressional measures, not because he deemed them illegal, but simply because he did not like them. In doing so, he set a precedent that vastly enlarged the presidential role in congressional law­making. Among Jackson's opponents, this executive activism drew charges of dictatorship. Those accusations, however, carried little weight among yeoman farmers and laborers, who doted on Jackson's professed opposition to elitism.