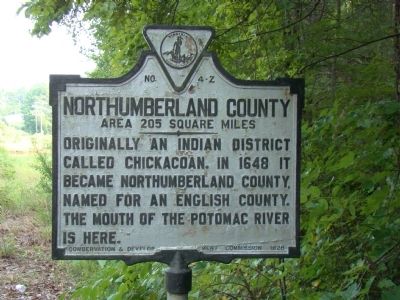 Westmoreland County. Area 252 square miles. Formed in 1653 from Northumberland and King George, and named for an English county. In it were born George Washington, James Monroe, and Robert E. Lee.

Topics and series. This historical marker is listed in this topic list: Political Subdivisions. In addition, it is included in the Former U.S. Presidents: #05 James Monroe, and the Virginia Department of Historic Resources series lists. A significant historical year for this entry is 1648.

Location. 38° 0.467′ N, 76° 35.283′ W. Marker is near Kinsale, Virginia, in Westmoreland County. Marker is on Cople Highway (Virginia Route 202) just west of the Hampton Hall Bridge over Hampton Hall Branch, on the right when traveling 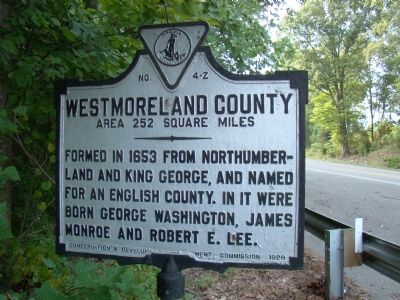 Click or scan to see
this page online
east. Touch for map. Marker is in this post office area: Kinsale VA 22488, United States of America. Touch for directions. 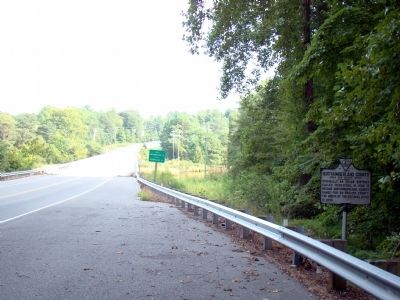 Photographed By J. J. Prats, August 30, 2009
3. Across the Bridge is Northumberland County
England. The first white settler to make a permanent home in the county was Col. John Mottrom, sometime between 1635-1640. ¶ In 1648 Northumberland County, Virginia, was officially formed by an act passed by the Burgesses in Jamestown, Virginia. It was later divided into three additional counties: Lancaster, Richmond and Westmoreland. Northumberland County has an area of approximately 222 square miles and a population of 12,400 people. ¶ For hundreds of years, Northumberland remained a county largely isolated from the rest of the state due to the lack of a road network. But in 1926, with the bridge crossing from Essex County to the Northern Neck, with access to the west, growth began in the area. 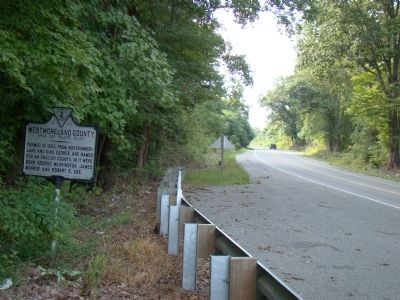