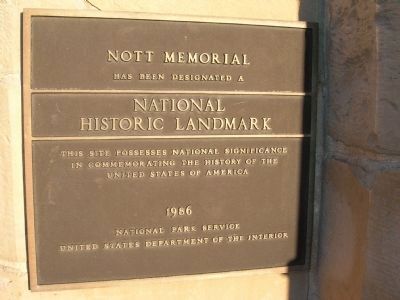 Topics and series. This historical marker and memorial is listed in this topic list: Education. In addition, it is included in the National Historic Landmarks series list. A significant historical year for this entry is 1986.

Location. 42° 49.02′ N, 73° 55.74′ W. Marker is in Schenectady, New York, in Schenectady County. Marker can be reached from South Lane near Library Lane. The Eliphalet Nott Memorial is located at the center of the Union College campus. The marker is mounted to the right of the eastern entrance. Touch for map. Marker is in this post office area: Schenectady NY 12308, United States of America. Touch for directions. 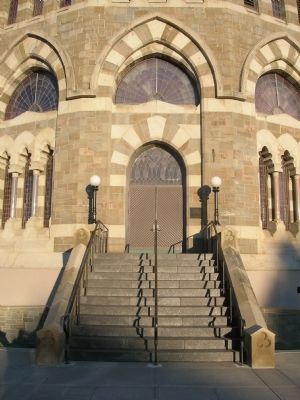 Photographed By Howard C. Ohlhous, March 17, 2008
2.
Nott Memorial Marker
The Marker is to the right of the entrance.

More about this memorial. The Nott Memorial Hall was listed In The National Register of Historic Places on May 5, 1972

Nott Memorial was Designated a National Historic Landmark on June 24, 1986.
Statement of Significance: "Completed in 1876, this is representative of the High Victorian Gothic Style which was made popular from the early 1860s until the 1870s by the writings of English critic John Ruskin (1819-1900) . With an open interior, it is essentially a stone cylinder supporting a cast-iron drum and dome between 94 and 100 feet in diameter. It was to be the focal point of the unrealized plan of Union College, founded in 1795, one of the oldest "planned" schools in the nation. It has served as a museum and a library."

Regarding Nott Memorial. One of America's most dramatic Victorian buildings, the Nott Memorial is an elaborate 16-sided stone-masonry building which serves as both architectural and physical centerpiece of the Union College campus in Schenectady, New York.

The building is dedicated to Eliphalet Nott (1773-1866), who was the president of Union College for sixty-two years. A Presbyterian minister, Nott was also an inventor and a major leader of American education. His many innovations include patents for anthracite coal-burning stoves and furnaces, and the introduction of scientific and engineering curricula at a liberal arts college.

The building was conceived by Nott in consultation with the French architect Joseph Jacques Ramee. Nott envisioned the central building as an Alumni Hall or Graduates’ Hall. The Nott Memorial was designed by architect Edward Tuckerman Potter, the grandson of President Nott and a Union College graduate (1864). It is a stone cylinder 89 feet in diameter, supporting a cast iron and steel hip roof and capped by a ribbed dome. The interior framework of the building is a cast iron and steel skeleton. The central space rises 102 feet to the apex of the dome. The exterior wall combines dark 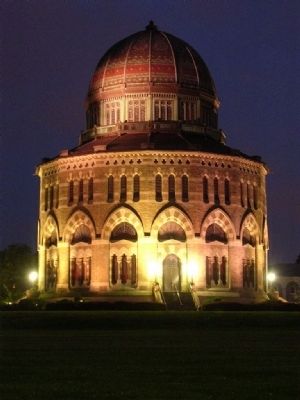 Photographed By Howard C. Ohlhous, June 27, 2006
3. Nott Memorial at Night
Schenectady bluestone with lighter Ohio sandstone. Columns of red and gray Aberdeen granite stand before the mullion of the window on the main floor. The dome and hip roof are covered in three colors of Vermont slate. Decorating each of the sixteen sections of the dome are small and large six-pointed star or "healpha," so named by the architect. Girding the lower portion of the dome is a band of red slate bearing a modified inscription from the Talmlud. Translated from the Hebrew it reads: "The day is short, the work is great, the reward is much, the Master is urgent."

Construction of the Alumni or Graduates’ Hall, the early name for the Nott Memorial, began in 1858. Construction was officially completed in 1879, 21 years later. In 1902 Andrew Carnegie pledges $40,000 to renovate the building. In 1904, on the Centennial of Eliphalet Nott's inauguration as Union College President, the College dedicated the build in his honor. For nearly sixty years the building was the College Library. Begun in 1993, a major restoration and renovation of the Nott Memorial was completed at a cost of $11 million (with nearly 1,800 donors) for Bicentennial celebration of the College's founding held on February, 25 of 1995.

Today the Nott Memorial is used for lectures, conferences and other college events. Also galley space is used for presenting art, science, and history exhibitions. The third floor is an informal gathering and study space for students. 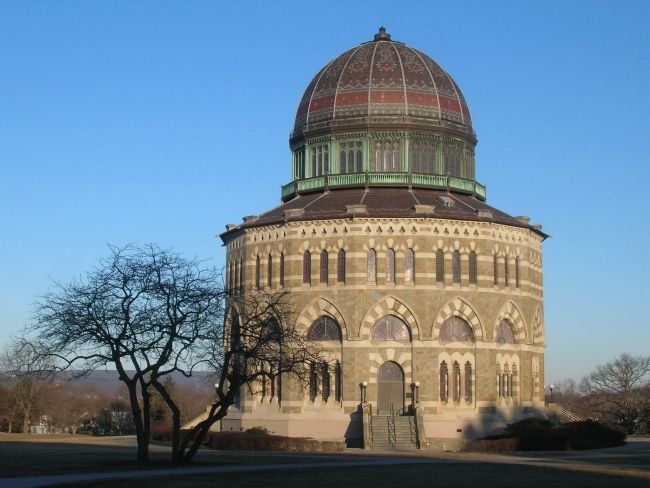 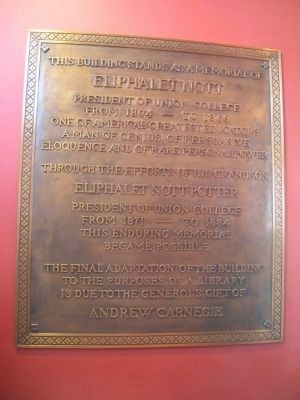 Photographed By Howard C. Ohlhous, March 21, 2008
5. Eliphalet Nott Plaque
This plaque is mounted just inside the main entranceway:
This Building Stands as a Memorial of
Eliphalet Nott
Presdient of Union College
From 1804 --- to 1866
One of America's Greatest Educators
A Man of Genious, Of Persuasive
Eloquence And Of Rare Personal Power
Through The Efforts Of His Grandson
Eliphalet Nott Potter
President of Union College
From 1871 --- To 1884
This Enduring Memorial
Became Possible
The Final Adaptation of the Building
To the Purposes of a Library
Is Due to the Generous Gift Of
Andrew Carnegie 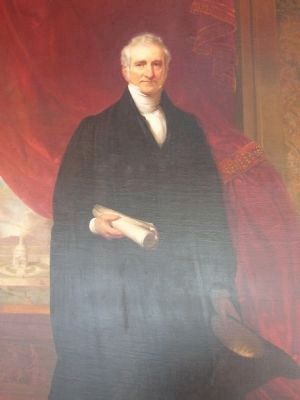 Photographed By Howard C. Ohlhous, March 21, 2008
6.
Eliphalet Nott
Union College alumni commissioned a large portrait of Eliphalet Nott by Henry Inman in 1839. This painting is installed on the ground floor of the Nott Memorial. 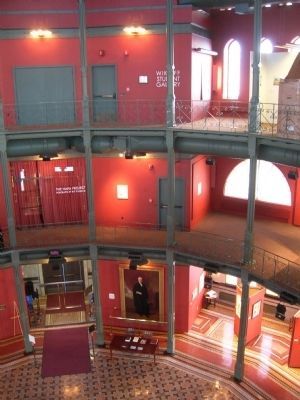 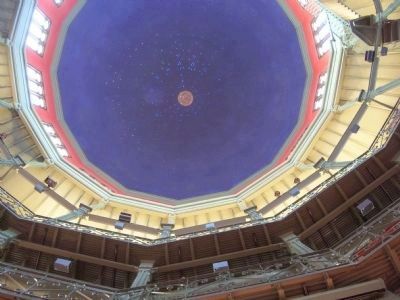 Photographed By Howard C. Ohlhous, January 23, 2008
8.
Nott Memorial Dome Interior
The underside of the Nott Memorial Dome
The dome is set with 709 small colored glass windows called "illuminators", each about the size of a silver dollar, and arranged in complex decorative pattern. 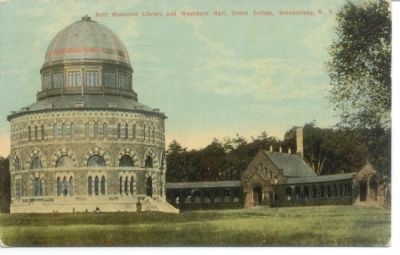 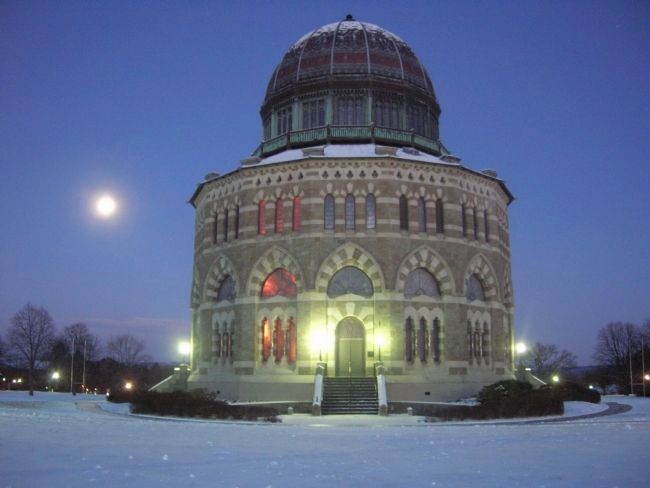