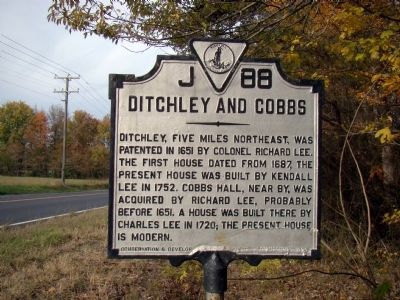 Photographed By J. J. Prats, November 9, 2009
1. Ditchley and Cobbs Marker
Inscription.
Ditchley and Cobbs. . Ditchley, five miles northeast, was patented in 1651 by Colonel Richard Lee. The first house dated from 1687, the present house was built by Kendall Lee in 1752. , Cobbs Hall, near by, was acquired by Richard Lee, probably before 1651. A house was built there by Charles Lee in 1720; the present house is modern. . This historical marker was erected in 1930 by Conservation and Development Commission. It is Near Kilmarnock in Lancaster County Virginia

Ditchley, five miles northeast, was patented in 1651 by Colonel Richard Lee. The first house dated from 1687, the present house was built by Kendall Lee in 1752.

Cobbs Hall, near by, was acquired by Richard Lee, probably before 1651. A house was built there by Charles Lee in 1720; the present house is modern.

Topics and series. This historical marker is listed in this topic list: Notable Places. In addition, it is included in the Virginia Department of Historic Resources series list. A significant historical year for this entry is 1651.

Other nearby markers. At least 8 other markers are within 3 miles of this marker, measured as the crow flies. Morattico Baptist Church (approx. 1.3 miles away); Never Forget Garden (approx. 1.8 miles away); First American Woman Missionary to China 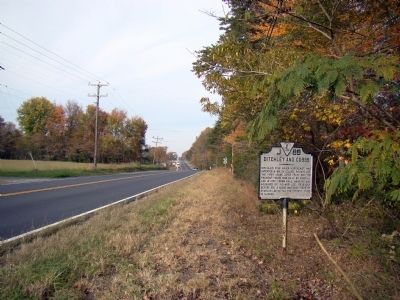 Peter’s 1985 Guidebook, puts it in Lancaster County, but in town at Route 3, as do earlier guidebooks. At the marker’s original location Ditchley is about five miles northeast. At its current location Ditchley is just a little over 2 miles east. The location of Cobbs Hall is nearby, at the end of Route 690.

Regarding Ditchley and Cobbs. Entry for Ditchley in the 1915 book Historic Virginia Homes and Churches by Robert A. Lancaster, Jr. “Ditchley looks upon the Chesapeake Bay. About the year 1647 Colonel Richard Lee, the first of the famous Lee family in Virginia, settled on a plantation at Dividing Creek, Northumberland County, which he named Ditchley. He was succeeded there by his seventh son Hancock Lee (1653–1709), a prominent man in his day, whose first wife was Mary, daughter of the Honorable William Kendall, of ‘the Eastern Shore,’ and his second, Elizabeth, daughter of the ‘converted’ Puritan, Isaac Allerton II, and granddaughter of those stern New England worthies the first Isaac Allerton and ‘Elder’ William Brewster. Hancock Lee was buried at Ditchley, where his tomb may still be seen. 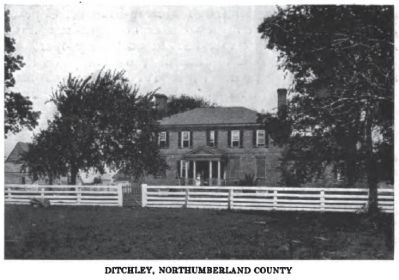 circa 1900
3. Ditchley, Northumberland County
From the 1915 book Historic Virginia Homes and Churches by Robert A. Lancaster, Jr. Photograph is from his collection.
Ditchley house is said to have dated from about 1687, but the present homestead, situated about two hundred yards from the site of its predecessor, was built by Kendall Lee, grandson of Hancock Lee, about the year 1765.

“Ditchley remained in the Lee family until 1789, when William Lee sold it to James Ball, Jr. (1718-1789), who had married said Lee’s aunt, Lettice Lee (1731-1811), and it has ever since been the property of the well-known family of Ball. A recent owner was Captain James F. Ball, a gallant officer in the Confederate Army.

“There is still in use at Wycomoco Church, Northumberland Parish, a communion cup bearing the inscription, ‘Ex Dono Hancock Lee to Ye Parish of Lee, 1711’.”

There is no entry for Cobbs Hall in Lancaster’s book.

Both Ditchley and Cobbs Hall are in the National Register of Historic Places but their nomination forms could not be found online at last check.

Editor’s want-list for this marker. Current photos of Ditchley and the “modern” Cobbs Hall • Photo of Hancock Lee’s tomb • Links to and excerpts from National Register of Historic Places nomination forms • Can you help?
Share this page.