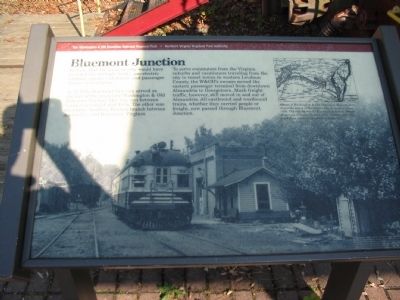 By Craig Swain, November 22, 2009
1. Bluemont Junction Marker
Inscription.
Bluemont Junction. . In June 1945 the scene nearby would have included the multiple tracks, gas-electric combine, electric substation, and passenger station shown below. . . As of 1912 Bluemont Junction served as the hub of the multi-line Washington & Old Dominion Railway. One line ran between Georgetown and Great Falls. The other was the former Southern Railway branch between Alexandria and Bluemont, Virginia. . . To serve commuters from the Virginia suburbs and vacationers traveling from the city to resort towns in western Loudoun County, the W&OD's owners moved the eastern passenger terminal from downtown Alexandria to Georgetown. Much freight traffic, however, still moved in and out of Alexandria. All eastbound and westbound trains, whether they carried people or freight, now passed through Bluemont Junction. . This historical marker was erected by The Washington & Old Dominion Railroad Regional Park - Northern Virginia Regional Park Authority. It is in Arlington in Arlington County Virginia

In June 1945 the scene nearby would have included the multiple tracks, gas-electric combine, electric substation, and passenger station shown below.

As of 1912 Bluemont Junction served as the hub of the multi-line Washington & Old Dominion Railway. One line ran between Georgetown and Great Falls. The other was the former Southern Railway branch between Alexandria and Bluemont, Virginia.

To serve commuters from the Virginia suburbs and vacationers traveling from the city to resort towns in western Loudoun County, the W&OD's owners moved the eastern passenger terminal from downtown Alexandria to Georgetown. Much freight traffic, however, still moved in and out of Alexandria. All eastbound and westbound trains, whether they carried people or freight, now passed through Bluemont Junction.

Topics and series. This historical marker is listed in this topic list: Railroads & Streetcars. In addition, it is included in the NOVA Parks 🏞️ 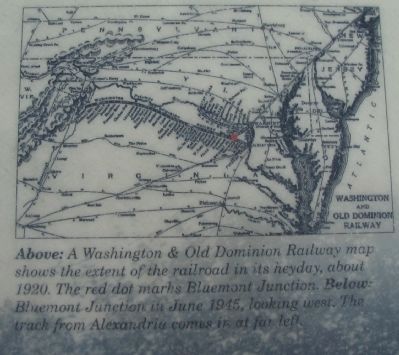 By Craig Swain, November 22, 2009
2. Close Up of the Railroad Map
, and the Washington and Old Dominion Railroad 🚂 series lists.

Location. 38° 52.386′ N, 77° 7.958′ W. Marker is in Arlington, Virginia, in Arlington County. Marker can be reached from North Manchester Street, on the right when traveling north. Located in the W&OD Regional Trail Park, adjacent to the Four Mile Run City park. Touch for map. Marker is in this post office area: Arlington VA 22205, United States of America. Touch for directions.

More about this marker. The background of the marker is a photo of Bluemont Junction in 1945, looking west. The track from Alexandria comes in at far left. An inset map in the upper right is captioned, A Washington & Old Dominion Railway map shows the extent of the railroad in its heyday, about 1920. The red dot marks Bluemont Junction

Also see . . .  W & OD Railroad. Wikipedia article detailing the history of the railroad and a listing of the train stations. (Submitted on November 28, 2009, by Craig Swain of Leesburg, Virginia.)

Additional comments.
1. Memories of a W&OD Railroad Employee
My mother and I had moved into a house in Dominion Hills in April 1947. I 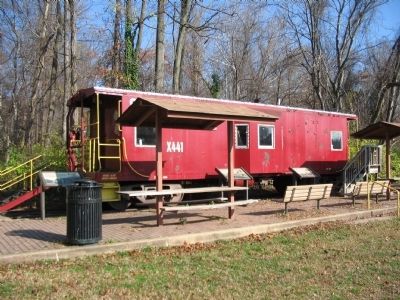 By Craig Swain, November 22, 2009
3. Three Markers in front of an Old Caboose
The markers at Bluemont Junction are clustered in front of an old caboose, which serves as an information center.
graduated from Washington-Lee High School in June 1957. The following month I was working on the tracks out of Bluemont Junction under Roger Fox, the foreman for that division of the W&OD, only five blocks from our house on Lebanon Street.

I had been trying unsuccessfully to find local employment somewhere in the Washington area following graduation. One particularly hot afternoon in July about 4:00 I was walking home over the tracks at the base of Wilson Boulevard when I noticed a group of men unloading track equipment from a gang car into the work shed. On a lark, I walked up to Mr Fox and asked him for a job working track. Without any other word, he asked, “Can you do hard work?” “Yes,” I replied. “Be here tomorrow morning at 7:00.”

He was right; the work was exhausting, especially in mid-summer. You may find it hard to believe, but my youthful background was as a classically trained trombonist, which was my life goal. Nevertheless, I kept up with Mr Fox and his crew for the next two years. Our turf was from Potomac Yards to shortly beyond Falls Church. On special occasions — usually big derailings, which were not infrequent on grossly deteriorated ties unable to support hoppers, weighing 70 tons, loaded with crushed gravel at Trap Rock — we worked over the entire line all the way to Purcellville. 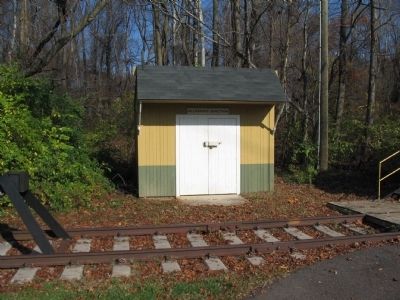 By Craig Swain, November 22, 2009
4. Reconstructed Track Bed
A reconstructed section of the old track bed, with a bumper, stand in front of an equipment shed with the station name.
whole W&OD crew was never very large. Roger Fox, Willie Nickens, Gene Shutts (brother of Randolph, a W&OD brakeman), William Barber, Dolf Cunningham, Douglas Lee and all the others . . . I remember them fondly for some very specific reasons. They taught me how to work cooperatively with men. Three, then four, men in a circle in turn driving home one spike while the others heckled and cheered with their eyes glued to the second hands of their clocks. Sounds easy? They taught me, by example, how to help the weaker among us. When someone came to work on Monday morning drunk, that part of the load he couldn’t handle was taken up by the others, with constant ribbing (without humiliation) of the slacker. He got his chance to return the insults elsewhere the following Monday! They truly were a good-natured bunch to work with.

Sometime in my second year I began working brakeman, often on night runs to Potomac Yards and then home to the shed in Rosslyn. But I also stayed on the tracks to the end of my time on the W&OD.

Well, after two years, I decided the time had come to move on. I left the W&OD in September 1959 to continue my studies as a classical trombonist. That took me to Baltimore to study for three years (with the bass trombonist of The Philadelphia Orchestra), then to New York. I was a charter member of The American Symphony Orchestra (Carnegie Hall) founded 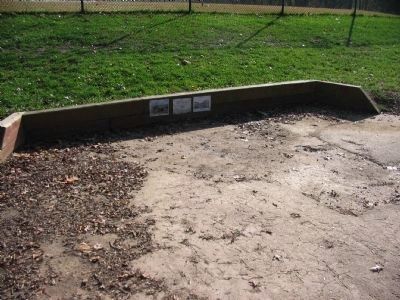 By Craig Swain, November 22, 2009
5. Floor of Electric Substation
by Leopold Stokowski in 1962. The following year I enrolled in The Juilliard School of Music (Bachelor of Music ’67; Master of Science ’68). Postgraduate studies followed at Columbia University; also, five years with The Metropolitan Opera Orchestra, with many other interesting experiences in music over the following decades.

My two years with the W&OD and its crews remain vivid memories. I still have my brass switch lock key, stamped “W&OD,” a five-volume set of The Science of Railways (Cropley Phillips Co., Chicago, 1913) by Marshall Monroe Kirkman (1842-1921) I had bought in the late 1950s, a freight logbook dated May 1956
with the signatures of H.E. Cunningham, F.H. Cunningham, D.N. Cunningham, A.D. Shutts, H.L.
Ritchie, E.E. Chidester, D.C. Mahoney, V.O. Haines, R. Shutts, D. See, B. Jet, Laintzy, C.O. Crossman, C.E. Leppe, W.W. Cole, and Lawrence E. Cunningham), my two pocket watches (Waltham and Westclox), three unused antique business envelopes printed for the W&OD, some of my pay stubs, and my lantern. I suppose that some day these mementos will go to the W&OD Museum in Bluemont Junction.

I’m writing an autobiography within a much larger family history, which will include a great deal more information than I’ve written here about the W&OD during the 1950s. Visits to Arlington several times yearly give me many chances to visit sites closely tied to the local history of the W&OD.

For persons interested in the history of the W&OD, there is an unusual collection of maps of Arlington and rare newspaper reports about the railroad, especially its last five or so years of existence, held in the Washingtoniana Division and The Washington Star Collection of the Martin Luther King, Jr. Memorial Library, 901 G Street N.W., Washington, D.C. There also are maps and related materials about the W&OD in different eras of its history in the collections of The Library of Congress in Washington.
— Submitted January 3, 2012, by Andre M. Smith of New York City, New York.
Credits. This page was last revised on February 23, 2020. It was originally submitted on November 28, 2009, by Craig Swain of Leesburg, Virginia. This page has been viewed 3,413 times since then and 8 times this year. Photos:   1, 2, 3, 4, 5. submitted on November 28, 2009, by Craig Swain of Leesburg, Virginia.
Share This Page.