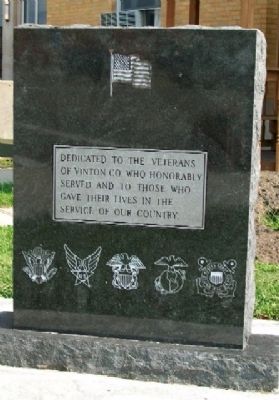 Dedicated to the veterans
of Vinton Co. who honorably
served and to those who
gave their lives in the
service of our country.

Topics. This historical marker and memorial is listed in these topic lists: Heroes • Military • Patriots & Patriotism.

Location. 39° 14.791′ N, 82° 28.731′ W. Marker is in McArthur, Ohio, in Vinton County. Marker is at the intersection of Main Street (U.S. 50) and Market Street (Ohio Route 93), on the right when traveling east on Main Street. Memorial is on the grounds of the Vinton County Courthouse. Touch for map. Marker is at or near this postal address: 108 S Market St, Mc Arthur OH 45651, United States of America. Touch for directions. 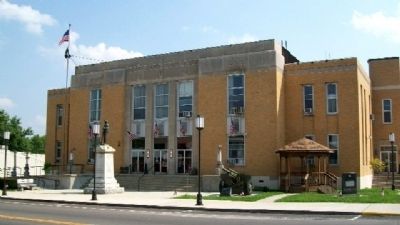