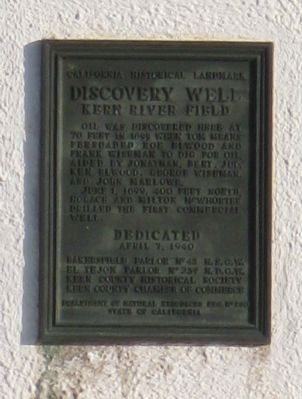 Oil was discovered at 70 feet in 1899, when Tom Means persuaded Roe Elwood and Frank Wiseman, aided by Jonathan, Bert, Jed, and Ken Elwood, George Wiseman, and John Marlowe, to dig here for oil. On June 1, 1899, 400 feet to the north, Horace and Milton McWhorter drilled this region's first commercial well.

Topics and series. This historical marker is listed in these topic lists: Industry & Commerce • Natural Resources. In addition, it is included in the California Historical Landmarks, and the Native Sons/Daughters of the Golden West series lists. 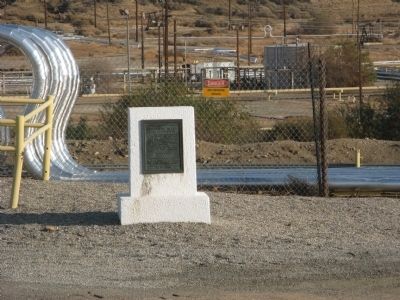 More about this marker. Marker is located approximately 100 feet south of the fence along Round Mountain Road. It is visible from the road. Appointment must be made to view the well and marker at its site.

Regarding Discovery Well. After oil was discovered at this site, the well was dug by hand.

This site was designated as California Registered Historical Landmark No.290 on June 27, 1938.

Also see . . .
1. California Oil Industry Comes of Age. A timeline of the history of oil drilling in California. (Submitted on December 8, 2009.)

2. Donald Laird Website of His Visits to California Historical Landmarks. A 1997 photo of the well is displayed. (Submitted on December 8, 2009.)

3. A Waymarking Post Displaying a More Recent Photo of the Well. (Submitted on December 8, 2009.)

Additional comments.
1. Ten Historic Events That Have Shaped the History of Bakersfield
An article By Jeff Nickell published on Bakersfieldlife.com reports that one of the 10 Historic 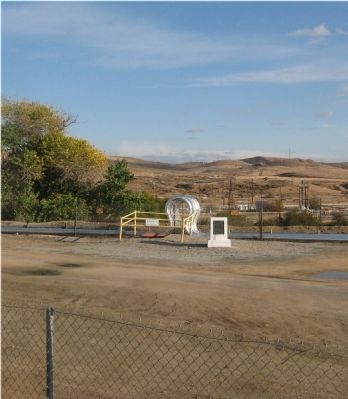 By Syd Whittle, November 28, 2009
3. Discovery Well and Marker
The Discovery Well is surrounded by the yellow fence.
Events that have shaped the history of Bakersfield is Kern River Oil Discovery:

The Discovery Well on the banks of the Kern River brought an oil boom to what became the Kern River Oil Field. Within a very short time, more than two-hundred companies were created to try their luck at drilling for oil. As noted oil historian Bill Rintoul wrote in his 1990 publication Drilling Through Time, “the names of the companies reflected everything from high hopes to pride in regional areas…including Prosperity, the Pennsylvanian, the Hawkeye State, the Sovereign, American Eagle, and Uncle Sam just to name a few.”

"The main use of crude oil from the Kern River Field’s was as fuel for locomotives. People were so enamored with the black gold that was flowing and the forest of wooden derricks, that Southern Pacific Railroad began promoting sightseeing trips from San Francisco to visit the Kern River Field. The cost of a round-trip excursion was $10.60."
— Submitted December 8, 2009, by Syd Whittle of El Dorado Hills, California. 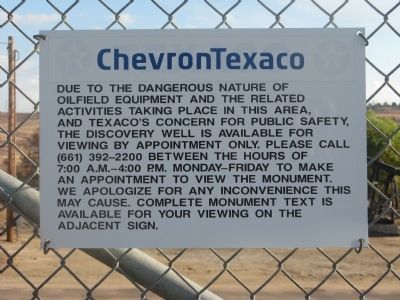 By Syd Whittle, November 28, 2009
4. Sign Posted at Fence
Attempted to get additional information by phoning this number, however no one had any knowledge of a tour or the site.
In addition, there was no "adjacent" sign. 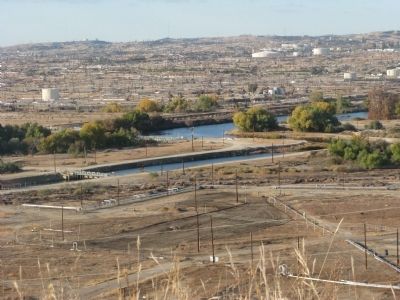