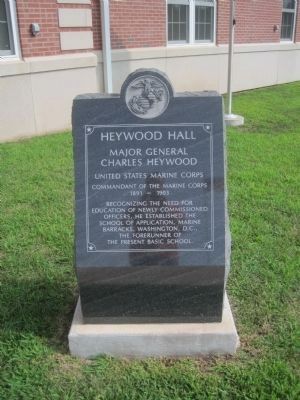 Topics. This historical marker is listed in these topic lists: Education • Military. A significant historical year for this entry is 1903.

Location. 38° 29.958′ N, 77° 26.35′ W. Marker is near Stafford, Virginia, in Stafford County. Marker is on Tripoli Avenue, 0 miles west of Belleau Avenue. Marker is located in front of the The Basic School Headquarters, Camp Barrett, Quantico Marine Corps Base. Touch for map. Marker is at or near this postal address: 24164 Belleau Ave, Quantico VA 22134, United States of America. Touch for directions. 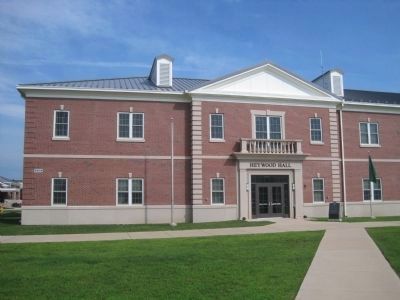 More about this marker. Heywood Hall is the headquarters building for The Basic School, Camp Barrett, Quantico Marine Corps Base.

Regarding Heywood Hall. Heywood Hall was named for Major General Charles Heywood. General Heywood was born in Maine on October 3, 1839, and was appointed a second lieutenant in the Marine Corps from New York, on April 5, 1858. During that year he was stationed at the Marine Barracks, Washington, D.C., and at Brooklyn, New York.

While on duty in Brooklyn he served in the Quarantine riots at Staten Island, New York. He performed special duty on the Niagra and later on board the St. Louis, of the Home Squadron, the ship seeking filibusters in Central America. He was invalid from Aspinwall (Colon), in January, 1860, and later was ordered to the sloop of war Cumberland, flagship 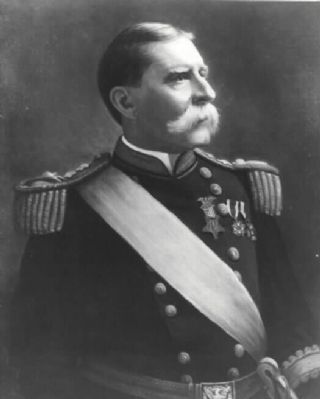 Official USMC Photograph
3. Major General Charles Heywood
of the Squadron of Observation at Vera Cruz, Mexico. In March, 1861, he returned to duty on board the Cumberland, and with that vessel took part in the destruction of the Norfolk Navy Yard during the Civil War.

In May, 1861, General Heywood was promoted to first lieutenant, and as such landed with the Marines at Hatteras Inlet, where he was present at the capture of Forts Clark and Hatteras. He was advanced to captain in November of that year, and during the winter of 1861-62 participated actively in a number of boat expeditions in the James River.

In the fight between the Cumberland and the Merrimac, in March, 1862, his conduct was particularly noteworthy while commanding the after gun deck division, firing the last gun in the fight and saving himself by jumping overboard as the Cumberland went down with her flag flying. he was most favorably mentioned for his gallant conduct and received the brevet rank of major for his services during the engagement.

For some afterwards he was actively employed, both on shore and at sea, in search for the notorious raider Alabama, until he applied for duty on board the flagship Hartford. He was ordered to that vessel as Fleet Marine Officer of the West Gulf Squadron.

He served on shore at Pensacola and was on board the Hartford in the battle of Mobile Bay, 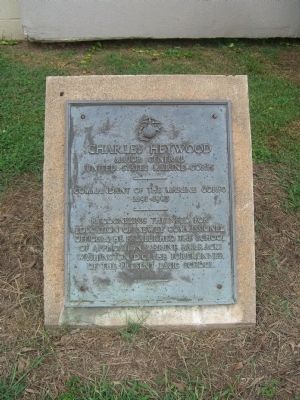 Photographed By Kevin W., September 14, 2007
4. Heywood Hall Marker
Original marker for the original Heywood Hall.
where he received the brevet rank of lieutenant colonel for gallant and meritorious services. During that engagement he had charge of two nine-inch guns. His services during the Civil War thus secured for him two brevet ranks for distinguished gallantry in the presence of the enemy.

From 1865 to 1867 he performed duty on board various ships, serving as Admiral Farragut’s Fleet Marine Officer on the European Station and later in the same capacity in the North Atlantic Squadron. During this period he also served for a time at Washington, Norfolk and Brooklyn. In November, 1876, he attained regular rank of major to which he had been brevetted more than ten years before, and was ordered to command the Marine Barracks, Washington, D.C.

During the serious labor riots of the summer of 1877 General Heywood commanded a battalion of Marines at Baltimore, Philadelphia, and Reading, Pennsylvania. He was honorably mentioned by General Hancock, U.S. Army who was in general command, and received thanks from the Navy Department for his services. His next two years of duty carried him to widely separated posts—Mare Island, California, and Brooklyn, New York.

In April, 1885, he organized, within twenty-four hours from the time of the order, a battalion of 250 Marines for duty on the Isthmus of Panama to open the transit. Subsequently under his command on the Isthmus

Photographed By Kevin W., September 14, 2007
5. Entrance to the original Heywood Hall
were eight-hundred Marines in addition to a strong detachment of the U.S. Navy and the artillery. For his arduous services the admiral commanding asked Colonel Heywood to “receive his grateful acknowledgments.”

General Heywood was promoted to lieutenant colonel on March 9, 1888, and on January 30, 1891 was appointed the ninth Colonel Commandant of the Marine Corps. By special acts of Congress he was promoted to brigadier general in March, 1899, and to major general in July, 1902.

The energy, experience and training which he had shown and obtained in his early days in the marine Corps were fully brought into play form the moment he assumed command of the Corps. At that time the Marine Corps consisted of 75 officers and 2,100 enlisted men, which gradually rose during his tenure of office until at the time of his retirement in 1903, it had reached the total of 278 officers and 7,532 enlisted personnel.

By increasing the efficiency 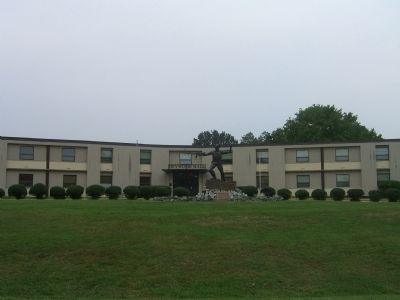 Photographed By Kevin W., September 14, 2007
6. Old Heywood Hall (demolished) and Leftwich Statue
of the Corps he tried to demonstrate to the Navy how absolutely essential it was as an auxiliary to the naval service. Under his administration the number of Marine Corps posts were increased from twelve to twenty-one. There was scarcely a regular post at which General Heywood was not able to provide new barracks or officers’ quarters.

He caused the regular system of target practice to be established and adopted good conduct medals for the betterment of the discipline in the Marine Corps. The declaration of war with Spain found the Marine Corps prepared.

General Heywood closed a most distinguished career of over forty-five years as a commissioned officer in the Marine Corps, when on October 3, 1903, in accordance with law, having attained the age of 64 years, he was placed on the retired list.

His death occurred in Washington, D.C. on February 26, 1915, and his remains were interred in the Arlington National Cemetery.