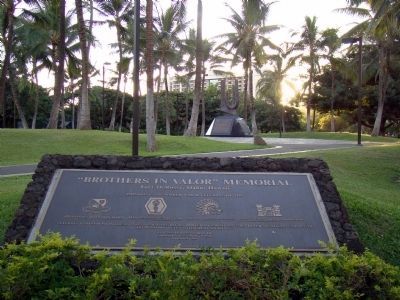 100th Infantry Battalion (Separate), “The Purple Heart Battalion.”
The 100th Infantry Battalion, except for some officers, was the first combat unit in the history of the United States Army to be comprised of Hawaii-born Japanese Americans. The unit was made up of 1,432 men and officers, most of whom were pre-war draftees serving in the 298th and 299th Infantry Regiments, guarding Hawaii after the Pearl Harbor attack on December 7, 1941.

On May 29, 1942, Japanese naval forces were approaching Midway. In anticipation of a subsequent Japanese attack on Hawaii, all Japanese-American soldiers in the 298th and 299th Infantry Regiments and others were 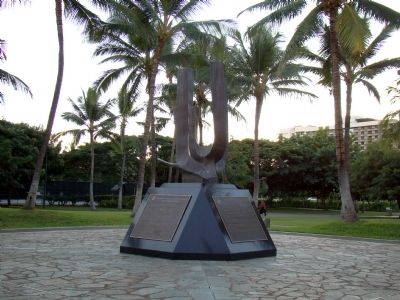 By J. J. Prats, October 23, 2008
2. “Brothers in Valor” Memorial
placed into the Hawaii Provisional Infantry Battalion and then shipped off on June 5, 1942, to Camp McCoy, Wisconsin, for combat training. Redesignated as the 100th Infantry Battalion (Separate), the unit received extensive training at Camp McCoy and Camp Shelby, Mississippi, for the next 16 months. All the while, the Army remained in doubt as to whether the 100th should be sent into combat, and if so, where and with which unit.

Finally, in September 1943, the 100th shipped out to Oran, Africa, attached to the 34th (“Red Bull”) Division, and landed at Salerno, Italy, on September 22, 1943. For the next nine months, the 100th fought in the Salerno-to-Rome campaign through the bitter winter against a tenacious enemy, most notably in the battle for Monte Cassino. Here, it suffered huge casualties and earned itself the title “The Purple Heart Battalion.”

The 100th landed on the Anzio Beachhead in March 1944, took over and held defensive positions, and thereafter participated in the break out towards Rome and beyond.

On June 11, 1944, the 100th was assigned as the “first battalion” of the newly arrived 442nd Regimental Combat Team. While retaining its original unit designation, its casualty-depleted ranks were bolstered by replacements from the 442nd. Thereafter, as part of the 442nd RCT, the 100th significantly contributed 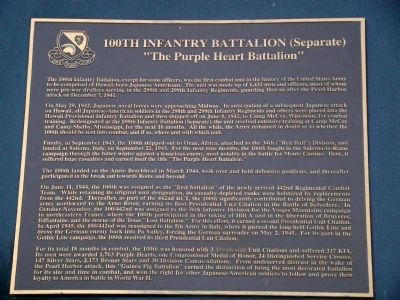 By J. J. Prats, October 23, 2008
3. 100th Infantry Battalion (Separate) Tablet
to driving the German army northward to the Arno River, earning its first Presidential Unit Citation in the Battle of Belvedere. In October-November, the 100/442nd was assigned to the 36th Infantry Division for the Vosges Mountains campaign in northeastern France, where the 100th participated in the taking of Hill A and in the liberation of Bruyeres, Biffontaine, and the rescue of the Texas “Lost Battalion.” For this effort, it earned a second Presidential Unit Citation. In April 1945, the 100/442nd was reassigned to the 5th Army in Italy, where it pierced the long-held Gothic Line and drove the German enemy back into Po Valley, forcing the German surrender on May 2, 1945. For its part in the Gothic Line campaign, the 100th received its third Presidential Unit Citation.

For its total 18 months in combat, the 100th was honored with 3 Presidential Unit Citations and suffered 337 KIA. Its men were awarded 1,703 Purple Hearts, one Congressional Medal of Honor, 24 Distinguished Service Crosses, 147 Silver Stars, 2,173 Bronze Stars and 30 Division Commendations. From undeserved distrust in the wake of the Pearl Harbor attack, this “Guinea Pig Battalion” earned the distinction of being the most decorated battalion for its size and time in combat, and won the right for other Japanese-American soldiers to follow and prove their loyalty to America in battle 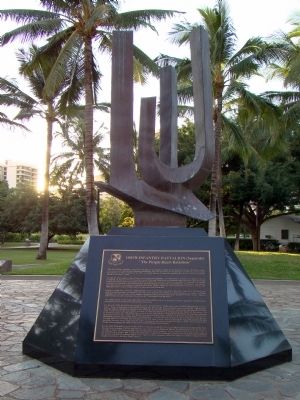 The 442nd RCT was comprised of the 442nd Infantry Regiment, the 522nd Field Artillery Battalion, the 232 Combat Engineers Company, the Anti-Tank Company, the Cannon Company, the Medical Detachment, and the 206th Army Ground Forces Band. After about a year of training, the 442nd was shipped out on May 1, 1944 to Italy, where it was joined by the 100th Infantry Battalion which became and fought as the “first battalion” of the 442nd RCT.

The 442nd was assigned to General Mark Clark’s U.S. Fifth Army and received its baptism of fire at Suvereto on June 26, 1944. For the next ten weeks the 442nd engaged the German army in the mountainous Italian terrain and drove the enemy forces north to the Arno River. On August 15, 1944, the Anti-Tank Company was detached from the 442nd to make an assault glider landing in the U.S. Army invasion 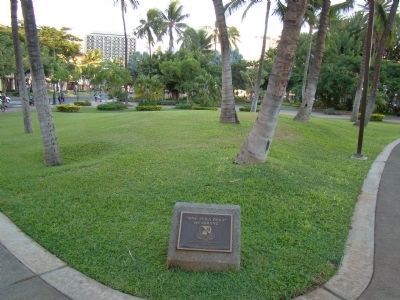 In October-November 1944, the 442nd was transferred to southeastern France and assigned to the 36th Infantry Division to fight the entrenched German enemy in the bitter cold and dark forests of the Vosges Mountains. The French towns of Bruyeres, Belmont and Biffontaine were liberated and the entrapped Texas “Lost Battalion” was rescued at the cost to the 442nd of over 800 casualties. In late March 1945, the 522nd Field Artillery Battalion was assigned to the U.S. Seventh Army to add its fire support in the Allied assault against Germany. There, it encountered and liberated Jewish survivors of the Dachau Death March and other concentration camps. In April 1945, the 442nd was returned to Italy at the specific request of General Clark to help the Fifth Army breach the German Gothic Line which had blocked the Allied advance for six months. The 442nd took less than a day to break through the German defenses at Mount Folgorito, and within the next three weeks routed the German army in retreat north to the Po Valley, where Germany finally surrendered on May 2, 1945.

In just ten months of combat against the German army, the 442nd RCT compiled a remarkable fighting record, although at a cost of over 717 killed and missing-in-action and 9,486 Purple Heart Medals. The unit won 7 Presidential Unit Citations and 18,143 individual decorations 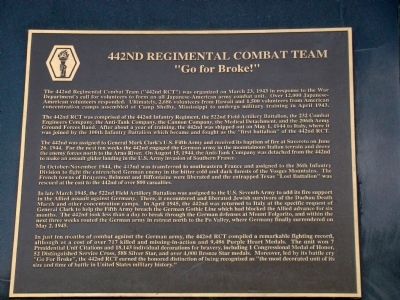 By J. J. Prats, October 23, 2008
6. 442nd Regimental Combat Team Tablet
for bravery, including 1 Congressional Medal of Honor, 52 Distinguished Service Cross, 588 Silver Star, and over 4,000 Bronze Star medals. Moreover, led by its battle cry “Go For Broke,” the 442nd RCT earned the honored distinction of being recognized as “the most decorated unit of its size and time of battle in United States military history.”

Military Intelligence Service, “M.I.S.”
During World War II, over 6,000 “Nisei” (Japanese-Americans) served the Allied Forces, performing secret military intelligence work against the Japanese military and dispelling any doubt that they as Americans would be willing to fight against an enemy of the same ancestry.

On November 1, 1941 the U.S. Army opened a secret military language school at the Presidio, San Francisco to teach and train military intelligence in the event of war against Japan. For the duration, Japanese-Americans with language capacity were recruited from the 100th Battalion, 442nd Regimental Combat Team, from the war camps and from Hawaii, producing over 6,000 graduates from military intelligence service language schools (MISLS) at the Presidio, Camp Savage and Fort Snelling, Minnesota to fight the intelligence war against Japan. 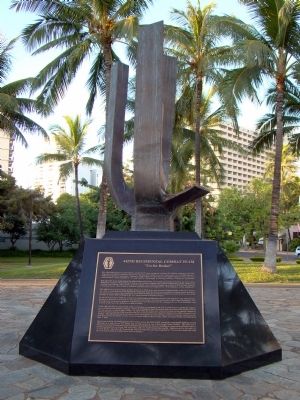 By J. J. Prats, October 23, 2008
7. 442nd Regimental Combat Team Face of Monument
against the Japanese military. They were assigned to the U.S. Army, Navy, Marine, and Air Force and “loaned out” to British, Australian, Canadian, New Zealand, Chinese, and Indian combat units in every phase of the Asia-Pacific War until Japan was defeated.

From May 1942, MIS “Nisei” participated in the Aleutian and Solomon Islands invasions, in General MacArthur’s drive through New Guinea and the Philippines, and in the Central Pacific invasions of Tarawa, Kwajalein, Majuro, Eniwetok, Saipan, and Guam, leading to the final assault on Iwo Jima and Okinawa. Operating out of New Delhi, India they helped drive the Japanese Army from Burma and reopen the Burma Road to China.

Little is known of the invaluable services of MIS “Nisei,” because they worked in strict confidentiality. They were America’s “secret weapon” in the 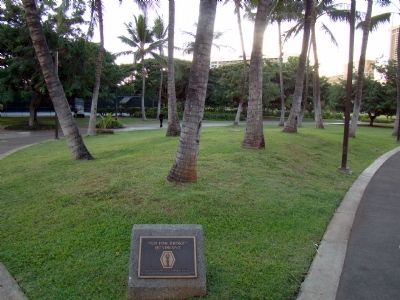 The 1399th was activated April 26, 1944 at Schofield Barracks. It was a composite unit made up of Japanese-American soldiers from the pre-war 395th Quartermaster Battalion, the 370th Engineers, the 1536th Dump Truck and 1525th Base Equipment Companies, and draftees from the April-August 1944 drafts. It rose to peak strength of 993 men in November 1944.

Throughout the war, the 1399th and its predecessor units constructed vital military defense installations on the island of Oahu. Their contributions were considered so essential to the defense of Oahu that Japanese-Americans of this unit were not assigned like others to form the 100th Infantry Battalion in May 1942.

The 1399th completed more than 54 major defense projects all over the island of Oahu, including construction of a million-gallon water tank in Wahiawa (still in use), jungle training villages, artillery 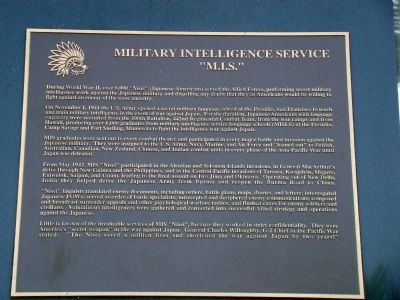 In recognition of its sterling services and contributions, the 1399th was presented with the Meritorious Service Award in October 1945. General MacArthur twice requested the 1399th to be assigned to the Philippines, but the War Department considered them more important to the defense of Hawaii and refused to put them in direct conflict with the Japanese enemy.

Always in the shadows of the other Japanese-American combat units, the 1399th’s proud record of achievements truly make them stand out as the “unsung heroes of the Hawaii front” during World War II.

Topics and series. This historical marker memorial is listed in these topic lists: Asian Americans • Military • War, World II. In addition, it is included in the Medal of Honor Recipients series list.

Location. 21° 16.96′ N, 157° 49.899′ W. Marker is in Waikiki, Hawaii, in Honolulu County. Marker is on Kalakaua Avenue north of Saratoga Road, on the right when traveling south. Touch for map. Marker is in this post office area: Honolulu HI 96815, United States of America. Touch for directions. 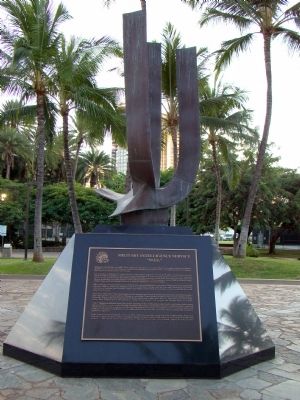 More about this memorial. Sculpture is by Bumpei Akaji, a veteran of the 442nd Battalion. It was unveiled and dedicated on Sunday July 4th 1998.

Also see . . .  A Gathering Of Warriors. 1998 article on the unveiling by Gregg K. Kakesako in the Honolulu Star-Bulletin. “They changed history, these nisei soldiers. They defeated not only the enemy, but racism as well. They gather here this weekend, 3,000 strong, to revel again in their exploits.” Includes photo of artist standing at the monument. (Submitted on November 16, 2008.) 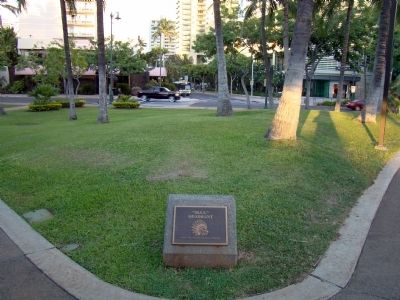 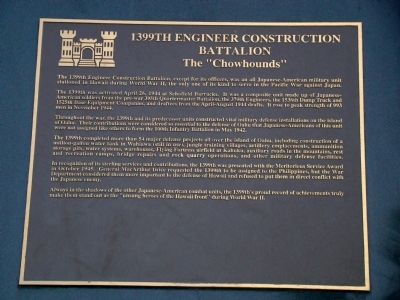 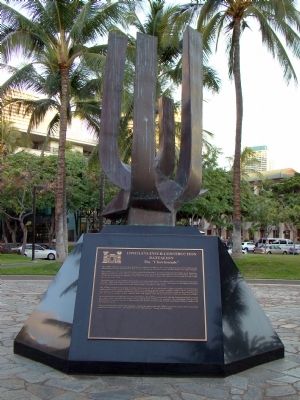 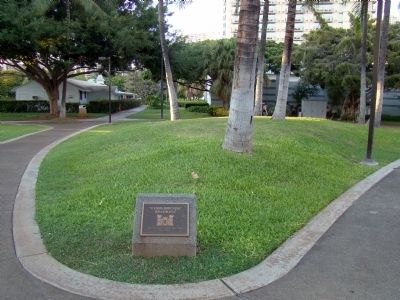 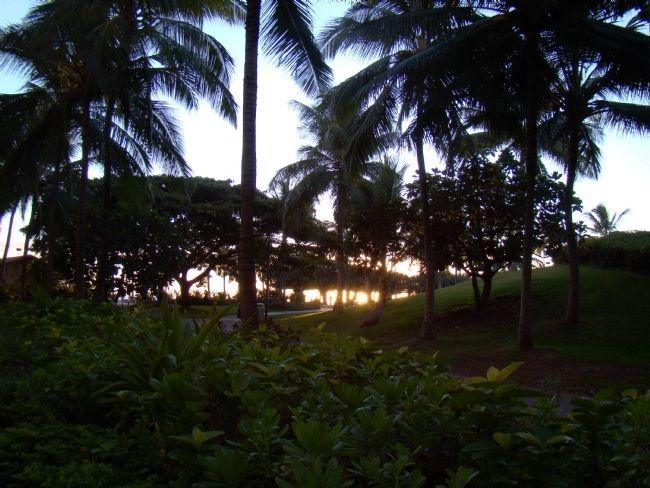