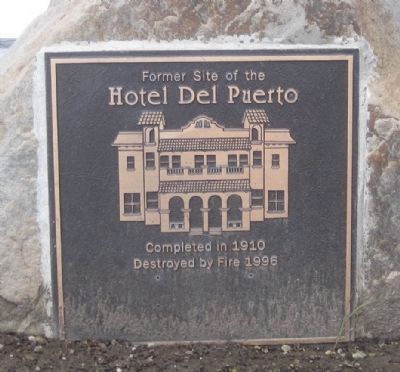 By Andrew Ruppenstein, January 30, 2010
1. Hotel Del Puerto Marker
The marker is mounted on a low rock on the left side of the entrance to City Hall as one is facing the building.
Inscription.
Hotel Del Puerto. . Former Site of Hotel Del Puerto , {picture of the former hotel} , Completed in 1910 , Destroyed by fire 1996 . This historical marker is in Patterson in Stanislaus County California

Topics. This historical marker is listed in this topic list: Notable Buildings. A significant historical year for this entry is 1910. 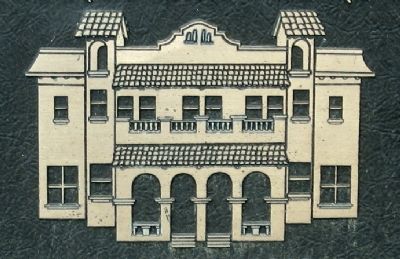 Click or scan to see
this page online
Patterson's founder, and the Patterson Ranch Company let the contract for the Del Puerto Hotel on November 27, 1909. According to Ranch Company minutes it was completed on October 29, 1910. The cost of construction was $25,000. "T.W." built the Center Building in Patterson's circle at the same time although it was completed perhaps a few weeks earlier than the Hotel. These were the first buildings started in the new town....Arthur Burnett Benton was the architect for both the Center Building and the Hotel. He was a prominent Los Angeles architect and was known as a promoter of the Mission Revival style which dominated California architecture during the first decade of the century....After its opening, and as intended, the Hotel housed prospective land buyers and future residents. It also served as a place for the Patterson family and others to stay who came to the new town on business.
(Submitted on February 10, 2010 by Andrew Ruppenstein.) 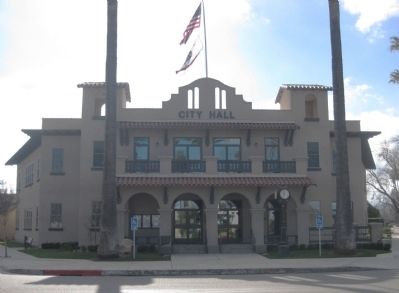