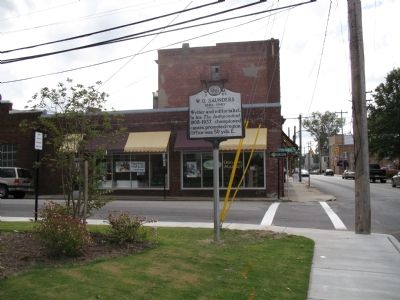 By Laura Troy, October 1, 2007
1. W. O. Saunders Marker
Inscription.
W. O. Saunders. Writer and editorialist. In his The Independent, 1908–1937, championed causes, promoted region. Office was 50 yds. E. . This historical marker was erected in 2004 by North Carolina Office of Archives and History. It is in Elizabeth City in Pasquotank County North Carolina

Writer and editorialist. In his The Independent, 1908–1937, championed causes, promoted region. Office was 50 yds. E.

Erected 2004 by North Carolina Office of Archives and History. (Marker Number A-83.)

Topics. This historical marker is listed in this topic list: Communications. A significant historical year for this entry is 1940.

Regarding W. O. Saunders. Few North Carolina newspapermen were as fearless and forthright as William Oscar Saunders, who denounced hypocrisy and advocated progressive causes for almost thirty years in his Elizabeth City paper, The Independent. His style was akin to that of H. L. Mencken who wrote that, if the South had forty editors like Saunders, it could be rid of its problems in five years. Saunders’s brand of personal journalism is largely unseen today.

Saunders did not attend college but became a reporter in Norfolk at seventeen. His break came with the sensational Nell Cropsey murder trial in Elizabeth City, which he covered for the Brooklyn Eagle. In 1908 he started The Independent and ran it until financial difficulties forced its shuttering in 1937. In 1918 he acquired a lot at 110 East Colonial Avenue and built an office. In a single term in the State House in 1919, Saunders advocated abolition of the death penalty.

Sarcastic and witty, he counted the powerful as his antagonists. Most notably, in 1924, he took on evangelist Mordecai Ham, in the midst of a seven-week tent crusade in Elizabeth City, for anti-Semitism. Ham, who had accused Sears president Julius Rosenwald of operating biracial brothels, was denounced in The Independent as a “shrewd, vicious and uncompromising demagogue, a careless mouth-artist, an irresponsible bunk-shooter, and a stirrer up of strife, hatred and bigotry.” Scholars have compared the confrontation to that of William Jennings Bryan and Clarence Darrow a year later. Saunders survived the ensuing firestorm but, never popular locally, moved to New York for a year to pursue free-lance writing.

Saunders dreamed big for eastern North Carolina. He is given credit for the idea to build the Wright Brothers Memorial at Kitty Hawk and long advocated modern bridges to the Outer Banks. On a visit to Germany he attended a passion play and was inspired to imagine an outdoor production. He contacted Frederick Koch at the University of North Carolina who convinced Paul Green to write “The Lost Colony.” In 2004 his newspaper office was razed for the construction of a public library addition notwithstanding efforts of local preservationists to save the building.