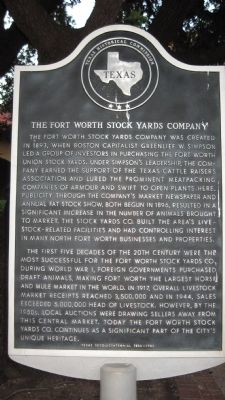 The Fort Worth Stock Yards Company was created in 1893, when Boston capitalist Greenlief W. Simpson led a group of investors in purchasing the Fort Worth Union Stock Yards. Under Simpson's leadership, the Company earned the support of the Texas Cattle Raisers Association and lured the prominent meatpacking companies of Armour and Swift to open plants here. Publicity through the Company's market newspaper and annual Fat Stock Show, both begun in 1896, resulted in a significant increase in the number of animals brought to market. The Stock Yards Co. built the area's livestock-related facilities and had controlling interest in many North Fort Worth businesses and properties.

The first five decades of the 20th Century were the most successful for the Fort Worth Stock Yards Co. During World War I, foreign governments purchased draft animals, making Fort Worth the largest horse and mule market in the world. In 1917, overall livestock market receipts reached 3,500,000 and in 1944, sales exceeded 5,000,000 head of livestock. However, by the 1950s, local auctions were drawing sellers away from this central market. Today the Fort Worth Stock

Click or scan to see
this page online
Yards Co. continues as a significant part of the city's unique heritage.
Texas Sesquicentennial 1836-1986.

Topics. This historical marker is listed in these topic lists: Animals • Industry & Commerce. A significant historical year for this entry is 1893.