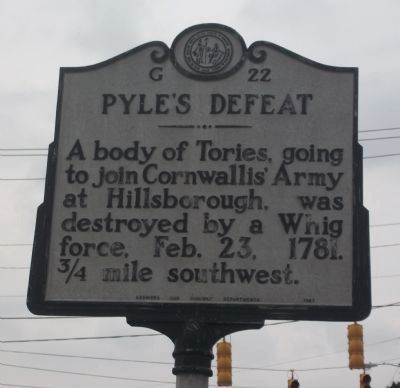 By Paul Jordan, March 11, 2010
1. Pyle's Defeat Marker
Inscription.
Pyle's Defeat. . A body of Tories, going to join Cornwallis' Army at Hillsborough, was destroyed by a Whig force, Feb. 23, 1781. ¾ mile southwest. . This historical marker was erected in 1967 by Archives and Highway Departments. It is in Burlington in Alamance County North Carolina

A body of Tories, going to join Cornwallis' Army at Hillsborough, was destroyed by a Whig force, Feb. 23, 1781. ¾ mile southwest.

Topics and series. This historical marker is listed in this topic list: War, US Revolutionary. In addition, it is included in the North Carolina Division of Archives and History series list. A significant historical date for this entry is February 23, 1865.

Other nearby markers. At least 8 other markers are within 2 miles of this location, measured as the crow flies. A different marker also named Pyle's Defeat (a few steps from this marker); Michael Holt II

Related marker. Click here for another marker that is related to this marker. This marker has been replaced with the linked marker which has different content.