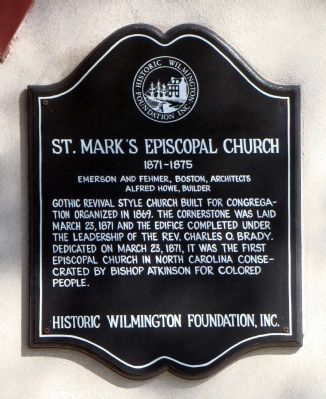 Gothic Revival style church built for congregation organized in 1869. The cornerstone was laid March 23, 1871 and the edifice completed under the leadership of the Rev. Charles O. Brady. Dedicated on March 23, 1871, it was the first Episcopal church in North Carolina consecrated by Bishop Atkinson for colored people.

Topics. This historical marker is listed in these topic lists: African Americans • Churches & Religion. A significant historical date for this entry is March 23, 1871.

Other nearby markers. At least 8 other markers are within walking distance of this marker. William G. Craig House (about 500 feet away, measured in a direct line); Powell - Yopp House (about 600 feet away); Grace Methodist Church (about 800 feet away); William B. Gould (approx. ¼ mile away); St. Mark’s 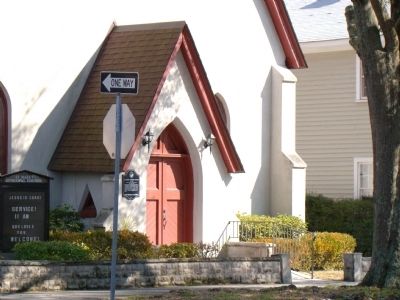 By J. J. Prats, February 23, 2010
2. St. Mark’s Episcopal Church Entrance
Marker is on the left of the main entrance doors on 6th Street.

Regarding St. Mark’s Episcopal Church. The St. Paul’s Espiscopal Church’s website (which also has a historical marker) says, “Even during the Civil War [St. Paul’s] was one of the first integrated congregations and had ‘free’ pews rather than the then customary practice of having to pay for designated seating in family pews. In 1869 following the Civil War St. Paul’s helped found still functioning St. Mark’s Church, the first Black Episcopal Church in all of North Carolina.”

Related marker. Click here for another marker that is related to this marker. This is the official North Carolina historical marker on 3rd Street. 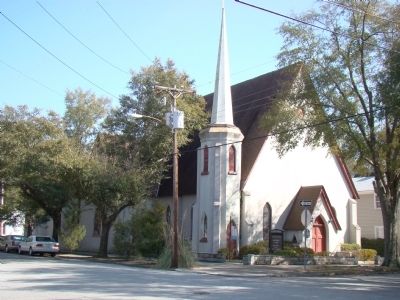