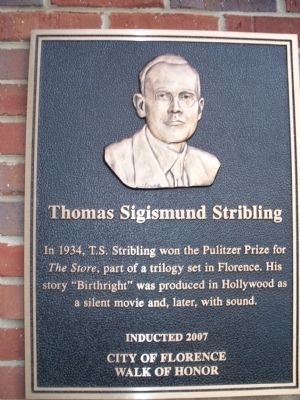 Photographed By Sandra Hughes, July 13, 2009
1. Thomas Sigismund Stribling Marker
Inscription.
Thomas Sigismund Stribling. City of Florence Walk of Honor. , In 1934, T.S. Stribling won the Pulitzer Prize for The Store, part of a trilogy set in Florence. His story "Birthright" was produced in Hollywood as a silent movie and, later, with sound. . This historical marker was erected in 2007 by City of Florence. It is in Florence in Lauderdale County Alabama

In 1934, T.S. Stribling won the Pulitzer Prize for The Store, part of a trilogy set in Florence. His story "Birthright" was produced in Hollywood as a silent movie and, later, with sound.

Topics. This historical marker is listed in these topic lists: Arts, Letters, Music • Entertainment. A significant historical year for this entry is 1934.

Location. 34° 48.395′ N, 87° 37.884′ W. Marker is in Florence, Alabama, in Lauderdale County. Marker can be reached from Hightower Place south of Veterans Drive (Alabama Route 133), on the left when traveling south. Located in River Heritage Park. Touch for map. Marker is in this post office area: Florence AL 35630, United States of America. Touch for directions. 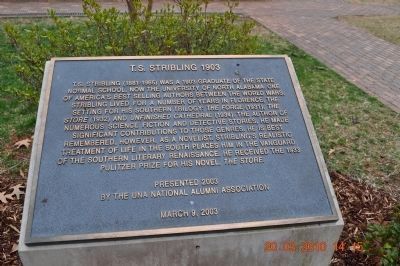 Photographed By Sandra Hughes, March 20, 2010
2. Thomas Sigismund Stribling Marker
T.S. Stribling (1981-1966) was a 1903 graduate of the State Normal School, now the University of North Alabama. One of America's best selling authors between the World Wars, Stribling lived for a number of years in Florence. The setting for his southern trilogy; The Forge(1931) the Store (1932), and Unfinished Cathedral (1934). He was the author of numerous works of science fiction and detective stories. He made significant contributions to those genres. He is best remembered, however, as a novelist. Stribling's realistic treatment of life in the South places him in the vanguard of the southern literary renaissance. He received the 1933 Pulitzer Prize for his novel, The Store. Presented 2003 by the UNA National Alumni Association March 9, 2003 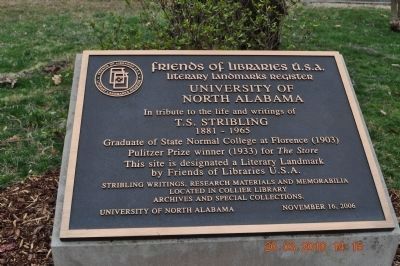 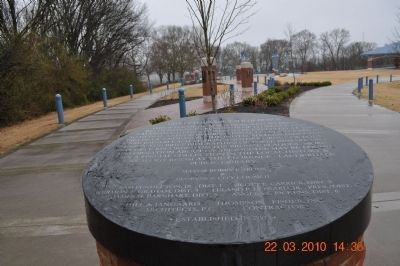