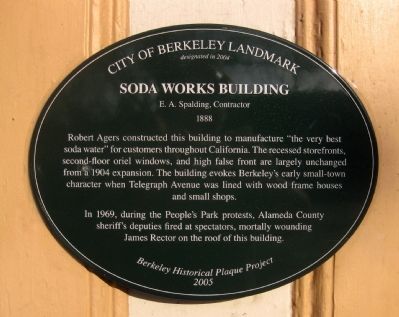 Robert Agers constructed this building to manufacture "the very best soda water" for customers throughout California. The recessed storefronts, second-floor oriel windows, and high false front are all largely unchanged from a 1904 expansion. The building evokes Berkeley's early small-town character when Telegraph Avenue was lined with wood frame houses and small shops.

In 1969, during the People's Park protests, Alameda County sheriff's deputies fired at spectators, mortally wounding James Rector on the roof of this building.

Topics. This historical marker is listed in this topic list: Notable Buildings. A significant historical year for this entry is 1904.

Location. 37° 51.893′ N, 122° 15.5′ W. Marker is in Berkeley, California, in Alameda County. Marker is on Telegraph Avenue south of Dwight Way, on the right when traveling north. Touch for map. Marker is at or near this postal address: 2511 Telegraph Avenue, Berkeley CA 94704, United States of America. Touch for directions.

Other nearby markers. At least 8 other markers are within walking distance of this marker. Mrs. E.P. (Stella) King Building (a few steps from this 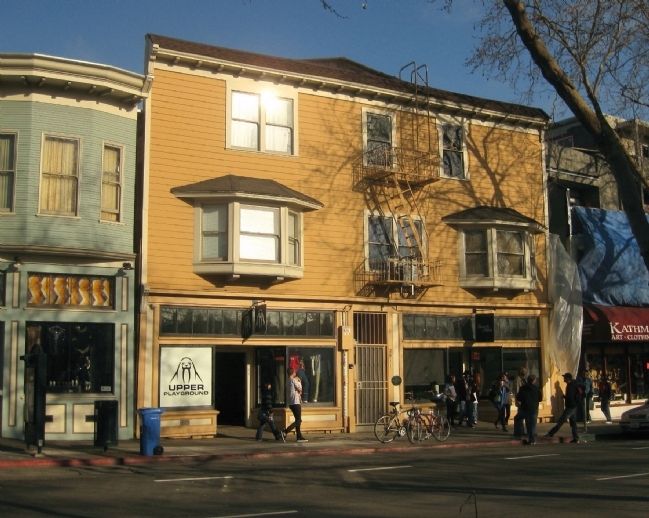 Photographed By Andrew Ruppenstein, March 7, 2010
2. Soda Works Building (from across Telegraph Avenue)
The marker is visible immediately to the right of the middle door.

Click or scan to see
this page online
marker); "In Tribute to Chiura Obata" (within shouting distance of this marker); Moe's Books (within shouting distance of this marker); “A People’s History of Telegraph Avenue” (about 400 feet away, measured in a direct line); J. Gorman & Son Building (about 500 feet away); American Baptist Seminary of the West - Hobart Hall (about 700 feet away); First Church of Christ, Scientist (about 700 feet away); Anthony Boucher: Editor and Writer (approx. ¼ mile away). Touch for a list and map of all markers in Berkeley.

Also see . . .  Berkeley Landmarks designated in 2004. Berkeley Landmark's page of landmarks designated in 2004, including the Soda Works building, by Daniella Thompson: "This early commercial-residential building housed owner Robert L. Agers’ soda water factory from 1888 until 1904, when it was sold and underwent significant renovations. These included the addition of a half-story to the existing two, probably involving the construction of the present gambrel roof and dormers. On the street façade, bay windows were added and the storefronts redesigned. Retail tenants in 1908 were Benedek’s fruit store and Detlefsen’s “Men’s Furnishing Goods.” The rear portion facing Regent St. was sold to a Methodist Episcopal Chinese mission.