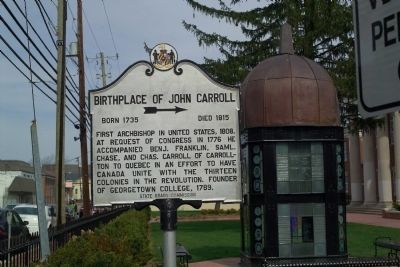 By Tom Fuchs, April 3, 2010
1. Birthplace of John Carroll Marker
Inscription.
Birthplace of John Carroll. Born 1735 — Died 1815. First archbishop in United States, 1808. At request of Congress he accompanied Benjamin Franklin, Samuel Chase and Charles Carroll of Carrollton to Quebec in an effort to have Canada unite with the thirteen colonies in the Revolution. Founder of Georgetown College, 1789. . This historical marker was erected by State Roads Commission. It is in Upper Marlboro in Prince George's County Maryland

First archbishop in United States, 1808. At request of Congress he accompanied Benjamin Franklin, Samuel Chase and Charles Carroll of Carrollton to Quebec in an effort to have Canada unite with the thirteen colonies in the Revolution. Founder of Georgetown College, 1789.

Topics. This historical marker is listed in these topic lists: Churches & Religion • Education • War, US Revolutionary. A significant historical year for this entry is 1808. 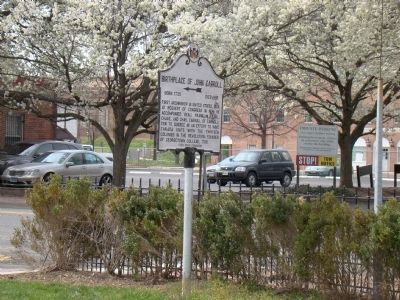 Also see . . .
1. Most Rev. John Carroll, First Archbishop of Baltimore. “Born of an ardent patriotism, Carroll’s own devotion to such American principles as freedom of conscience and separation of Church and state were readily communicated to his coreligionists in America. To friends and acquaintances abroad he continually held up his native land as a model for imitation. No minister of religion, moreover, contributed more to the ecumenical spirit that stamped the early national period than did Carroll. He developed close friendships with almost all the leaders of other denominations.” (Submitted on January 3, 2019, by J. J. Prats of Powell, Ohio.)

2. The Life of John Carroll. This page at the John Carroll University website, no longer available, contained a drawing of John Carroll’s birthplace. It included this excerpt, written by John Carroll to a magazine publisher: “Sir:–One of your correspondents 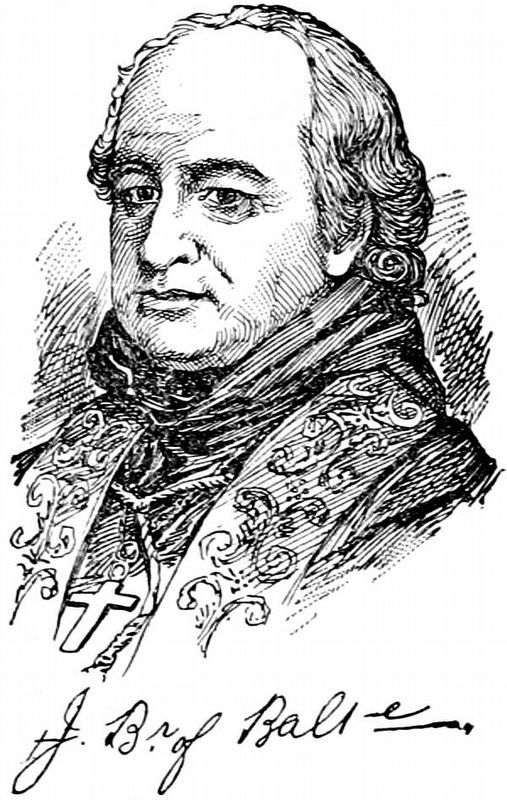 3. John Bishop of Baltimore
This portrait of John Carroll appears in The Biographical Dictionary of America, 1906 by Rossiter Johnson.
sends you a fabricated history of a Cardinal Tulone, who never existed, and which you inserted in a former Magazine; this history he enriched with inflammatory comments; but he had neither justice nor candour enough to undeceive your readers by informing them that the whole was a malicious fable. . . . When you condescend to relate events of modern times, you might, once in a month, make selection of a few articles of undoubted credit and general importance, and not deal out the malicious and mischief-making forgeries of persecuting Europeans. Thanks to genuine spirit and Christianity, the United States have banished intolerance from their system of government, and many of them have done the justice to every denomination of Christians, which ought to be done to them in all, of placing them on the same footing of citizenship, and conferring an equal right of participation in national privileges. Freedom and independence, acquired by the united efforts, and cemented with the mingled blood of Protestant and Catholic fellow-citizens, should be equally enjoyed by all. . . .” (Submitted on April 6, 2010, by J. J. Prats of Powell, Ohio.)
Credits. This page was last revised on November 22, 2019. It was originally submitted on April 5, 2010, by Tom Fuchs of Greenbelt, Maryland. This page has been viewed 896 times since then and 16 times this year. Photos:   1. submitted on April 5, 2010, by Tom Fuchs of Greenbelt, Maryland.   2. submitted on April 6, 2010, by J. J. Prats of Powell, Ohio.   3. submitted on June 9, 2018, by Allen C. Browne of Silver Spring, Maryland. • J. J. Prats was the editor who published this page.
Share this page.