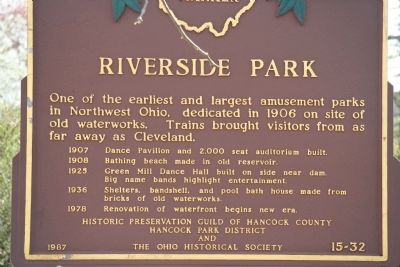 [West Side of Marker] : "Riverside Park"
One of the earliest and largest amusement parks in Northwest Ohio dedicated in 1906 on site of old waterworks. Trains brought visitors from as far away as Cleveland. 1907: Dance Pavilion and 2,000 seat auditorium built. 1908: Bathing beach made in old reservoir. 1925: Green Mill Dance Hall built on side near dam. Big name bands highlight entertainment. 1936: Shelters, band shell, and pool bath house made from bricks of old waterworks. 1978: Renovation of waterfront begins new era. 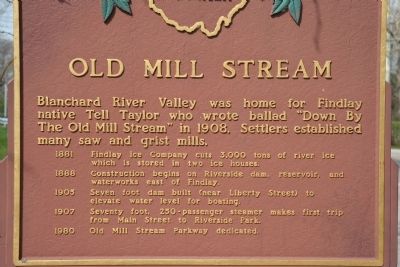 Click or scan to see
this page online
Parkway dedicated.

Topics and series. This historical marker is listed in this topic list: Notable Places. In addition, it is included in the Ohio Historical Society / The Ohio History Connection series list. A significant historical year for this entry is 1906.

Location. 41° 2.552′ N, 83° 37.916′ W. Marker is in Findlay, Ohio, in Hancock County. Marker is at the intersection of Clinton Court and McManness Avenue, on the left when traveling east on Clinton Court. This historical marker is located on the north side of the Blanchard River, in Riverside Park, just outside of the southwest corner of the park's swimming pool enclosure, just inside the entrance to the parking lot of the Riverside Landings Park. Touch for map. Marker is in this post office area: Findlay OH 45840, United States of America. Touch for directions. 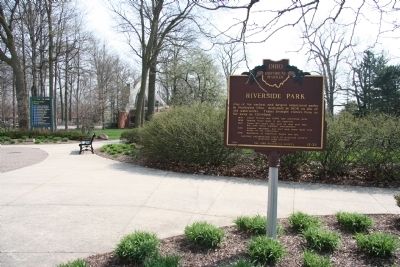 Photographed By Dale K. Benington, April 5, 2010
3. Riverside Park Marker
View of historical marker in the right foreground with a view of a walkway that leads into the interior of Riverside Park in the left background.
Elijah & Mellie Jones House (approx. 0.8 miles away); Veterans Memorial Flagpole (approx. 0.9 miles away); Site of Fort Findlay (approx. one mile away). Touch for a list and map of all markers in Findlay. 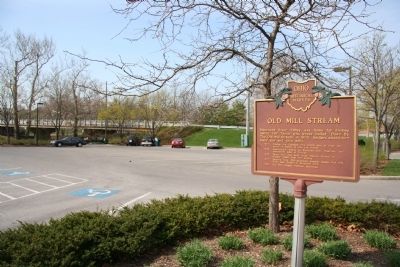