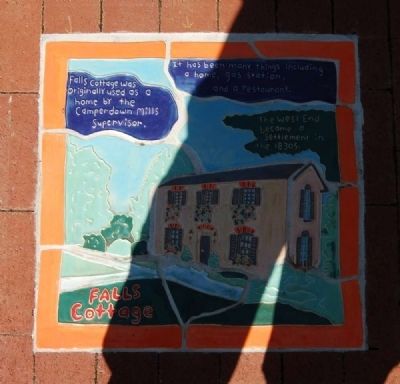 By Brian Scott, March 4, 2010
1. Falls Cottage Marker
Inscription.
Falls Cottage. . . Falls Cottage was originally used as a home by the Camperdown Mills Supervisor. . . It has been many things including a home, gas station, and restaurant. . . The West End became a settlement in the 1830s. . This historical marker is in Greenville in Greenville County South Carolina

Falls Cottage was originally used as a home by the Camperdown Mills Supervisor.

It has been many things including a home, gas station, and restaurant.

The West End became a settlement in the 1830s. 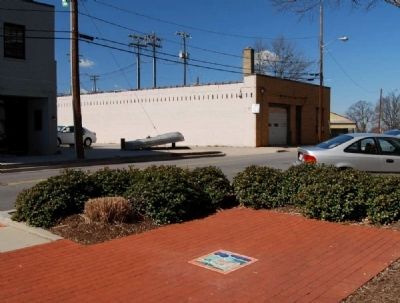 3. West End Commercial Historic District. The West End Commercial Historic District is significant as Greenville’s second “downtown,” with historic resources dating from ca. 1869 to ca. 1939, the majority of which date from the 1880s to the 1920s, a period of extensive development in the area. (Submitted on April 18, 2010, by Brian Scott of Anderson, South Carolina.)

Additional comments.
1. Falls Cottage
W.E. Touchstone and his wife Matilda built this two-story brick residence for their family to occupy in 1893.Touchstone was the superintendent of Camperdown Mills and in 1894 resigned and left for Alabama. His family remained in Greenville and his wife was made owner of the home. In 1897 Matilda Touchstone sold her home and eventually it was turned into a filling station by K.S. Conrad who bought the property in 1920. In early 1990, the 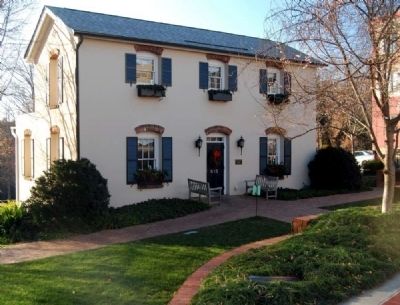 By Brian Scott
3. Falls Cottage -
Northeast Corner
Marker Seen in Center Front
house underwent renovations and opened as a combination art gallery and restaurant. (Source: Greenville County Historic Sites: Driving Tour by Greenville County Library System, pg 8.)
— Submitted April 18, 2010, by Brian Scott of Anderson, South Carolina.
2. Touchstone House
One of the most charming buildings still surviving in the West End business district is the home found on the bend of South Main Street called the Touchstone house. The two-story stucco-covered brick house overlooking the Reedy River Falls was built in the last decade of the nineteenth century by W.E. Touchstone and his wife Matilda shortly after Chicora College was built across the street. Touchstone was the supervisor of the Camperdown Mill across the river, so the home's location was very convenient. The majority of other Camperdown workers lived in the mill village housing off Falls Street. Camperdown Mill closed just as his home was built and he moved to Alabama while his family stayed in the home for three more years. Right next to the home, Furman University students would cut over to Main Street for many years on a path that led up the hill from the school.

In the first decade of the twentieth century, Camperdown reopened and the Touchstone house had people moving in and out. A.R. 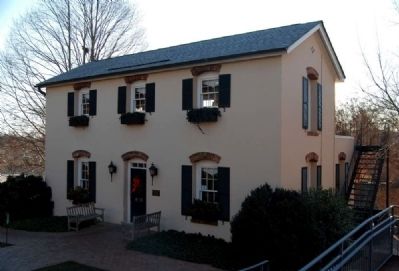 By Brian Scott
4. Falls Cottage -
Northwest Corner
Black lived in it from 1899-1900, I.C. Newton from 1901 and 1902 and G.W. Charlotte lived in the house in 1903. By the second decade of the century the house became Curry's Gasoline Station when auto-related businesses were taking over the majority of commercial buildings in the West End. Later is was People's Service Station.

In he mid-1970s plans were put in motion to begin revitalizing Falls Park as well as the touchstone cottage. The Carolina Foothills Garden Club took over the house in a state that would be unrecognizable today. Later the house was renovated to what is believed to be near its original look and housed the Metropolitan Arts Council. When the beautification of Falls Park was underway, the Touchstone house was an integral part of the plan as a "gateway" to the historic park site. The home is now known as Falls Cottage and for years has operated as a successful and charming restaurant with perhaps the best view of Falls Park. (Source: A Guide to Historic Greenville, South Carolina by John M. Nolan (2008), pgs 36-37.)
— Submitted April 18, 2010, by Brian Scott of Anderson, South Carolina. 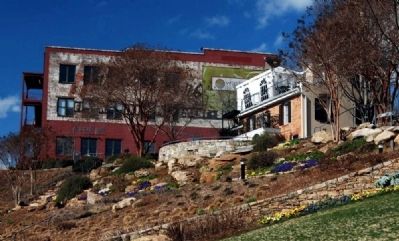 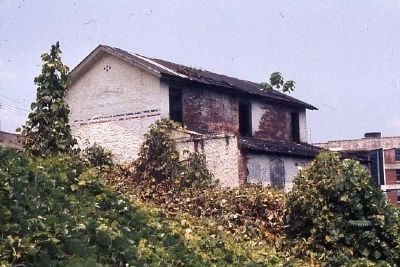