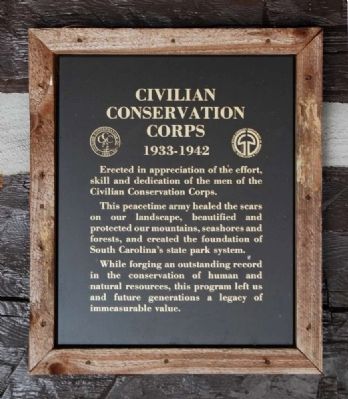 Erected in appreciation of the effort, skill and dedication of the men of the Civilian Conservation Corps.

This peacetime army healed the scars on our landscape, beautified and protected our mountains, seashores and forests, and created the foundation of South Carolina's state park system.

While forging an outstanding record in the conservation of human and natural resources, this program left us and future generations a legacy of immeasurable value.

Topics and series. This historical marker is listed in these topic lists: Charity & Public Work • Government & Politics • Natural Resources. In addition, it is included in the Civilian Conservation Corps (CCC) 🏞️ series list.

Location. 35° 1.668′ N, 82° 41.717′ W. Marker is in Pickens, South Carolina, in Pickens County. Marker can be reached from Table Rock State Park Road. Marker is located near the main entrance to the Lodge at Table Rock. Touch for map. Marker is in this post office area: Pickens SC 29671, United States of America. Touch for directions.

Other nearby markers. At least 10 other markers are within 4 miles of this marker, measured as the crow flies. A CCC Classic (here, next to this marker); Parkitecture 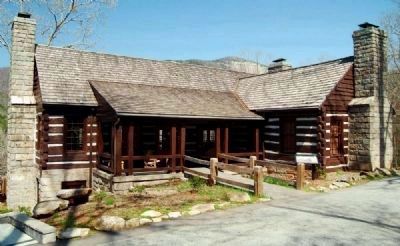 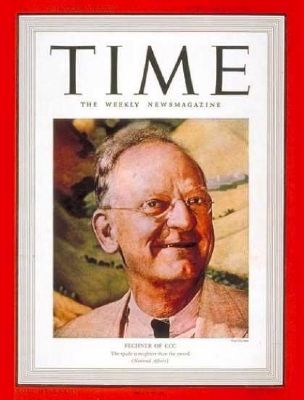 3. WGBH Ampercian Experience: The Civilian Conservation Corps. One of the most popular New Deal programs, the CCC put three million young men to work in camps across America during the height of the Great Depression. (Submitted on April 29, 2010, by Brian Scott of Anderson, South Carolina.)

4. Robert Fechner. Robert Fechner (22 March 1876 - 31 December 1939) was a national labor union leader and director of the Civilian Conservation Corps (1933–39), which played a central role in the development of state and national parks in the United States. (Submitted on April 29, 2010, by Brian Scott of Anderson, South Carolina.)

5. Arlington National Cemetery - Robert Fechner Entry. Born on March 22, 1876, he was an organized labor leader for much of his life. (Submitted on April 29, 2010, by Brian Scott of Anderson, South Carolina.)

6. James McEntee. James Joseph McEntee (19 September 1884 – 13 October 1957) was an American machinist and labor leader who served as the second director of the Civilian Conservation Corps from 26 February 1940 until it was terminated in 1942. (Submitted on April 29, 2010, by Brian Scott of Anderson, South Carolina.)