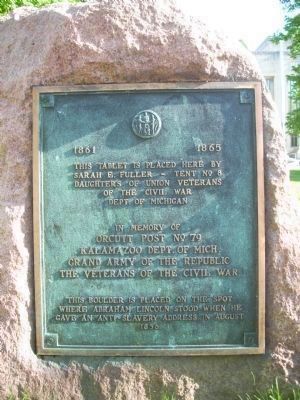 This tablet is placed here by
Sarah E. Fuller - Tent No. 8
Daughters of Union Veterans
of the Civil War
Dept. of Michigan

in memory of
Orcutt Post No. 79
Kalamazoo, Dept. Of Mich.
Grand Army of the Republic
the veterans of the Civil War
This boulder is placed on the spot where Abraham Lincoln stood when he gave an anti- slavery address in August, 1856.

Erected by Daughters of Union Veterans of the Civil War, Dept. of Michigan.

Topics and series. This historical marker is listed in this topic list: Government & Politics. In addition, it is included in the Former U.S. Presidents: #16 Abraham Lincoln series list. A significant historical year for this entry is 1861.

Location. 42° 17.405′ N, 85° 35.113′ W. Marker is in Kalamazoo, Michigan, in Kalamazoo County. Marker can be reached from West South Street near South Rose Street, on the left when traveling east. Touch for map. Marker is in this post office area: Kalamazoo MI 49007, United States of America. Touch for directions. 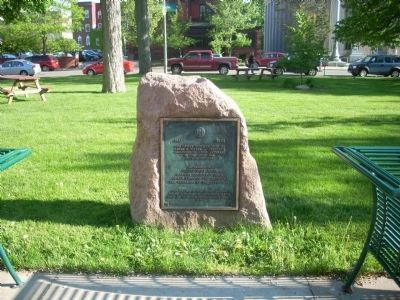