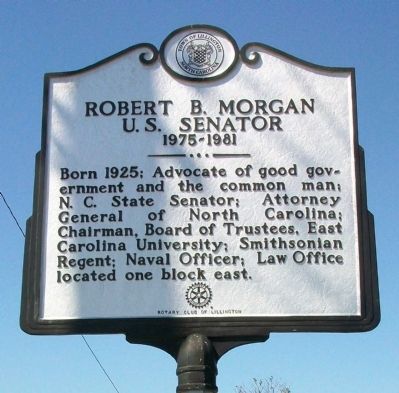 Erected by Rotary Club of Lillington.

Topics. This historical marker is listed in this topic list: Education. A significant historical year for this entry is 1925.

Location. 35° 23.932′ N, 78° 48.961′ W. Marker is in Lillington, North Carolina, in Harnett County. Marker is at the intersection of South Main Street (U.S. 401) and East Front Street (U.S. 421), on the right when traveling north on South Main Street. Marker is on the property of what once was the Harnett County Courthouse. Touch for map. Marker is at or near this postal address: 701 N Carolina 27, Lillington NC 27546, United States of America. Touch for directions. 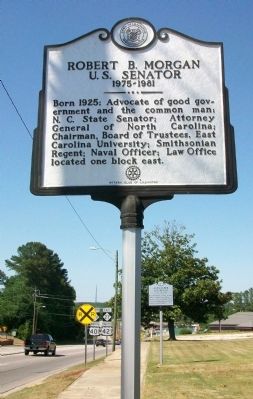 By Robert Cole, May 9, 2010
2. Robert B. Morgan Marker
Marker is located at the corner of East Front Street and South Main Street in downtown Lillington. This view looks north toward the Cape Fear River.

From humble beginnings on a Harnett County farm, Morgan had a remarkable career 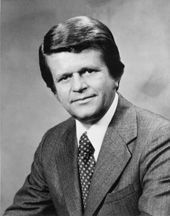 By Unknown
3. Senator Robert B. Morgan
in Raleigh and Washington serving as a powerful state legislator, a crusading attorney general, a one-term U.S. senator and finally, in an unlikely coda, as head of the State Bureau of Investigation.

Throughout his career, Morgan displayed a pronounced independent streak, whether it was taking on North Carolina’s establishment to create a medical school at East Carolina University, alienating conservatives by supporting the Panama Canal Treaty, or reining in the excesses of the FBI and the CIA. Note To Editor only visible by Contributor and editor
— Submitted July 26, 2016. 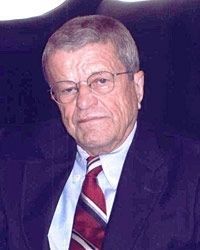 By Unknown, June 2006
4. Robert B. Morgan
For his consistent public service and unquestioned integrity, Senator Robert Morgan was recognized as NC Notable in June 2006 by NCSpin. 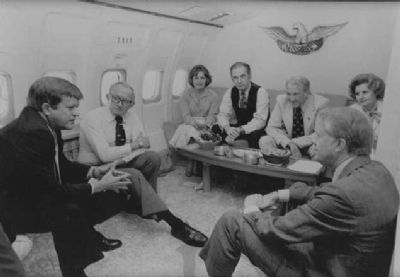 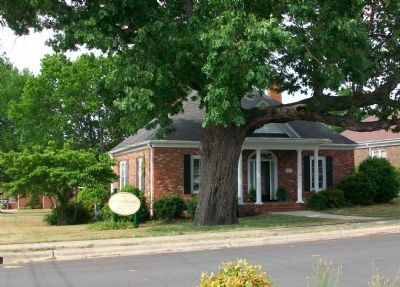