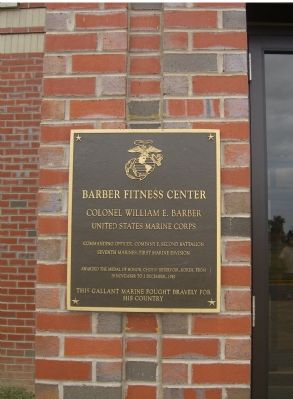 This gallant Marine fought bravely for his Country

Location. 38° 31.002′ N, 77° 18.154′ W. Marker is in Quantico Marine Corps Base, Virginia, in Prince William County. Memorial is on Barnett Avenue near John Quick Road, on the left when traveling west. Touch for map. Marker is at or near this postal address: 2073 Barnett Avenue, Quantico VA 22134, United States of America. Touch for directions.

2. Interview with Colonel Barber about his experience at Toktong Pass. 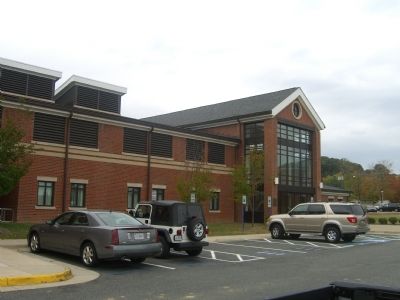 Colonel William E. Barber, who earned the Medal of Honor during the bitter Chosin Reservoir campaign in Korea in November and December, 1950, died April 19, 2002 at his home in Irvine, California. A captain at the time he won the Medal, he led his company in a desperate five-day defense of a frozen mountain pass vital to the 1st Marine Division's breakout to the sea.

Fighting in sub-zero temperatures against overwhelming odds, he was wounded on the first night of the action, but refused evacuation and remained in action in command of his company. He was presented the Medal of Honor by President Truman in ceremonies at the White House on August 20, 1952.

A World War II veteran and former paramarine, Colonel Barber earned the Silver Star Medal and his first Purple Heart as a second lieutenant at Iwo Jima, where he disregarded his own wounds and direct enemy fire to rescue two wounded Marines from enemy territory.

Upon completing boot camp at Parris Island, South Carolina, and parachute training at the Naval Air Station, Lakehurst, New Jersey, he was designated a paramarine and assigned as a parachute 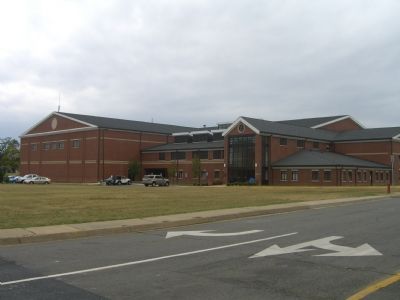 Lieutenant Barber served with the 1st Parachute Regiment on the West Coast until 1944. Assigned as a platoon commander with the 26th Marine Regiment, 5th Marine Division, at Camp Pendleton, California, he embarked for the Pacific area and later took part in combat on Iwo Jima. After being wounded, he was evacuated and later returned to his unit, serving as company commander during the last two weeks of the operation. Shortly after, he was promoted to first lieutenant and again commanded the company during the initial occupation of Japan.

In October 1950, as a captain, he was ordered to Korea and took part in the action which earned him the Medal of Honor. Wounded on November 29, he was evacuated on December 8, and hospitalized in Yokosuka, Japan, until his return to the United States in March 1951. The following month, he joined the San Diego Recruit Depot as a company commander and later Executive Officer of the 1st Recruit Training Battalion. He was promoted to major in July 1952. 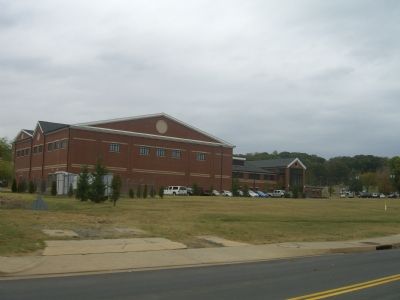 By Kevin W., October 23, 2007
4. Barber Fitness Center
to 1958, he served in Thailand as Assistant Naval Attache and Assistant Naval Attache for Air at the American Embassy in Bangkok. During the next four years he was assigned to Marine Corps Schools, Ouantico, and served as Assistant Chief Instructor of the Junior School. While there, he was promoted to lieutenant colonel in April 1960.

Again ordered overseas, Lieutenant Colonel Barber joined the 3d Marine Division on Okinawa in July 1962 as Commanding Officer, Reconnaissance Battalion. Following his return to the United States, he served at Headquarters Marine Corps as Head, Combat Requirements Section, until January 1966 when he became Head, Marksmanship Branch, G-3 Division, and served in this capacity until July 1967. He was promoted to colonel, September 22, 1965.

Following that assignment, he was ordered to the Far East where he served his last tour of active duty as Psychological Operations Officer, III Marine Amphibious Force, Military Assistance Command, Vietnam. For his service in this capacity, he was awarded the Legion of Merit with Combat "V. He retired from active duty, May 1, 1970. Besides the Medal of Honor, Silver Star Medal, the Legion of Merit with Combat V", and two Purple Hearts, Colonel Barber holds two Presidential Unit Citations, the Marine Corps Good Conduct Medal (1940-1943) , the American Defense Service Medal, the American Campaign Medal, the Asiatic-Pacific Campaign Medal with one battle star, the World War II Victory Medal, the Navy Occupation Service Medal with 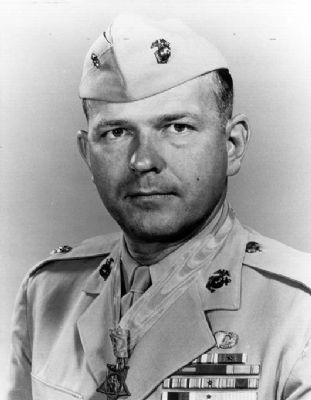 http://www.medalofhonor.com/WilliamBarber.htm
— Submitted October 23, 2007, by Kevin W. of Stafford, Virginia.
2. Medal of Honor Citation
The President of the United States in the name of The Congress takes pleasure in presenting the MEDAL OF HONOR to

For conspicuous gallantry and intrepidity at the risk of his life above and beyond the call of duty as Commanding Officer of Company F, Second Battalion, Seventh Marines, First Marine (Division (Reinforced), in action against enemy aggressor forces in Korea from 28 November to 2 December 1950. Assigned to defend a three-mile mountain pass along the division's main supply line and commanding the only route of approach in the march from Yudam-Ni to Hagaru-ri, Captain Barber took position with his battle weary troops and, before nightfall, had dug in and set up a defense along the frozen snow-covered hillside. When a force of estimated regimental strength savagely attacked during the night, inflicting heavy casualties and finally surrounding his position following a bitterly fought seven-hour conflict, Captain Barber, after repulsing the enemy, gave assurance that he could hold if supplied by air drops and requested permission to stand fast when orders were received by radio to fight his way back to 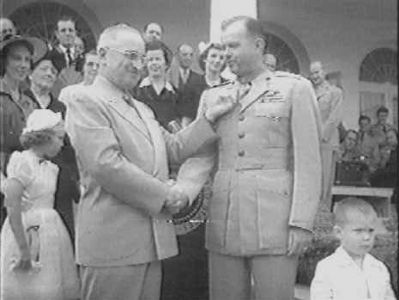 Arlington National Cemetery Website
6. William E. Barber receiving the Medal of Honor from President Truman
a relieving force after two reinforcing units had been driven back under fierce resistance in their attempts to reach the isolated troops. Aware that leaving the position would sever contact with the 8,000 Marines trapped at Yudam-ni and jeopardize their chances of joining the 3,000 more awaiting their arrival in Hagaru-ri for the continued drive to the sea, he chose to risk loss of his command rather than sacrifice more men if the enemy seized control and forced a renewed battle to regain the position, or abandon his many wounded who were unable to walk. Although severely wounded in the leg the early morning of the 29th, Captain Barber continued to maintain personal control, often moving up and down the lines on a stretcher to direct the defense and consistently encouraging and inspiring his men to supreme efforts despite the staggering opposition. Waging desperate battle throughout five days and six nights of repeated onslaughts launched by the fanatical aggressors, he and his heroic command accounted for approximately 1,000 enemy dead in this epic stand in bitter sub-zero weather, and when the company was relieved, only 82 of his original 220 men were able to walk away from the position so valiantly defended against insuperable odds. His profound faith and courage, great personal valor and unwavering fortitude were decisive factors in the successful withdrawal of the division from the deathtrap in the Chosin Reservoir sector and reflect the highest credit upon Captain Barber, his intrepid officers and men and the United States Naval Service.