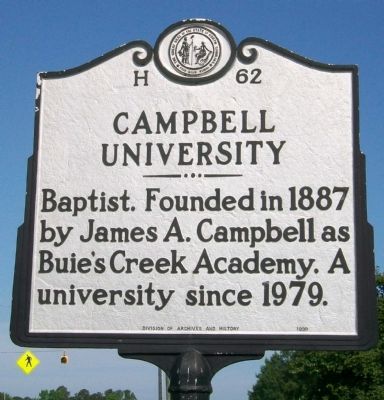 By Robert Cole, June 6, 2010
1. Campbell University Marker
Inscription.
Campbell University. . Baptist. Founded in 1887 by James A. Campbell as Buie's Creek Academy. A university since 1979. . This historical marker was erected in 1990 by NC Divison of Archives and History. It is in Buies Creek in Harnett County North Carolina

Baptist. Founded in 1887 by James A. Campbell as Buie's Creek Academy. A university since 1979.

Topics. This historical marker is listed in these topic lists: Churches & Religion • Education. A significant historical year for this entry is 1887.

Other nearby markers. At least 8 other markers are within 7 miles of this marker, measured as the crow flies. Campbell House (approx. 0.7 miles away); Paul Eliot Green (approx. ¾ mile away); Alton Stewart (approx. 3.8 miles away); Cornelius Harnett (approx. 4 miles away); Harnett County Veterans Memorial (approx. 4.1 miles away); Alexander Lillington

Additional commentary.
1. Campbell University
Campbell University, a Baptist institution of higher learning, was founded as Buies Creek Academy on January 5, 1887, by James Archibald Campbell, a local Baptist minister and graduate of Wake Forest College. The original enrollment was only twenty-one male students, but by 1898 the academy had three buildings and over sixty pupils. Two years later, on Dec. 23, 1900, a fire consumed every wooden campus building with the exception of a large tabernacle.

A possibly apocryphal story associated with the fire concerns the origin of the current university’s rather unusual mascot, the Fighting Camel. When local entrepreneur Zachary Taylor Kivett found Campbell moping after the conflagration, 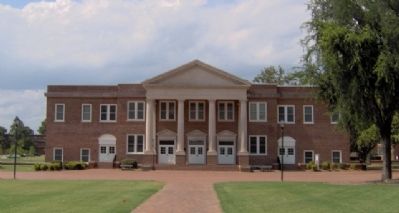 By Naytchrboy (WP User), June 5, 2007
3. D. Rich Memorial Building at Campbell University
This building was built in 1923.
he asked “Why are you in bed? I thought Campbells had humps on them.” Kivett pledged on the spot to build a new brick building, which was completed in 1903 and was named for him. It is the oldest building on the present campus.

Playwright Paul Green studied at Buies Creek Academy. In 1926, the school became a junior college and its name changed to Campbell College in honor of its founder. Thirty-five years later the school was promoted to a senior college, and in 1979 received its university status. Three years prior to officially becoming a university, the college opened Campbell School of Law. By the early 2000s the school’s enrollment consisted of nearly 10,000 students including those at extension campuses.