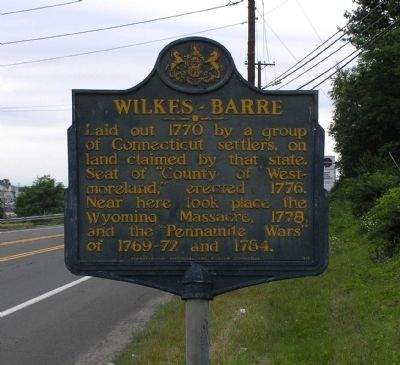 Photographed By Paul Crumlish, June 16, 2010
1. Wilkes-Barre Marker
Inscription.
Wilkes-Barre. . Laid out 1770 by a group of Connecticut settlers, on land claimed by that state. Seat of "County of Westmoreland," erected 1776. Near here took place the Wyoming Massacre, 1778, and the "Pennamite Wars" of 1769-72 and 1784. . This historical marker was erected in 1949 by Pennsylvania Historical and Museum Commission. It is in Wilkes-Barre in Luzerne County Pennsylvania

Topics and series. This historical marker is listed in these topic lists: Settlements & Settlers • War, US Revolutionary. In addition, it is included in the Pennsylvania Historical and Museum Commission series list. A significant historical year for this entry is 1770.

Other nearby markers. At least 8 other markers are within one mile of this marker, measured as the crow flies 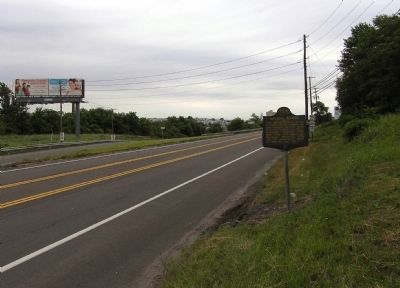 Photographed By Paul Crumlish, June 16, 2010
2. Wide view of the Wilkes-Barre Marker
Looking north across the skyline of Wilkes-Barre's neighborhoods.

Related markers. Click here for a list of markers that are related to this marker. To better understand the relationship, study the markers shown.