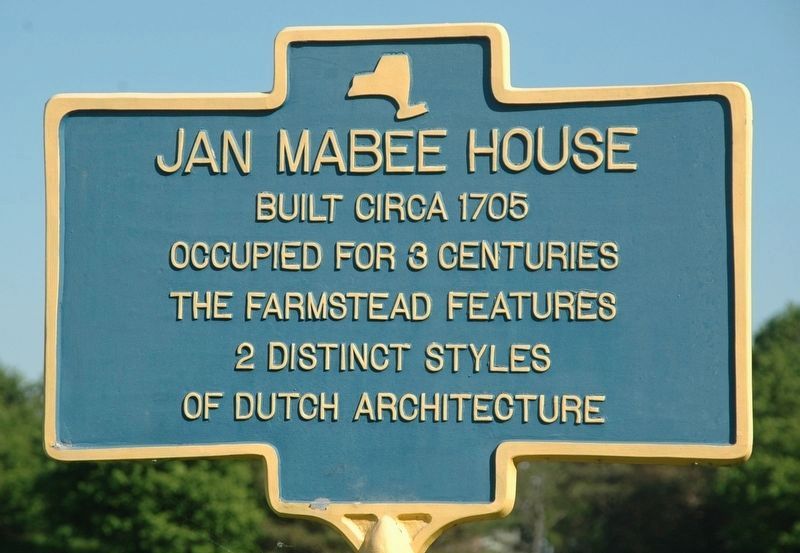 Topics. This historical marker is listed in this topic list: Notable Buildings. A significant historical year for this entry is 1705. 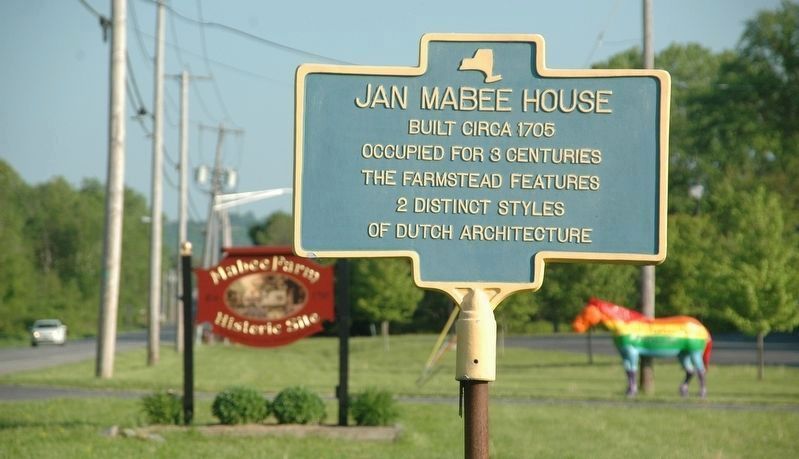 More about this marker. Apparently the Jan Mabie House, 1670 marker was replaced with the current "Jan Mabee House" marker in order to update the spelling of the name, and the construction date of the house.

Built in 1705, the original one room house, with a very steep pitched roof, has a dutch style jambless fireplace, an area for a box bed, huge ceiling beams, and wide plank floors. Another room was added 1760 to accommodate Jan Mabee's growing family.


This 300+ year old Dutch farm is set along the beautiful banks of the Mohawk River on Route 5S in Rotterdam Junction, which is just to the west of Schenectady, NY.

The oldest house still standing in the Mohawk Valley, the Mabee Farm Historic Site was originally settled by Daniel Janse Van Antwerpen, who established it as a fur trading post to meet Native American traders before they reached Schenectady. He received 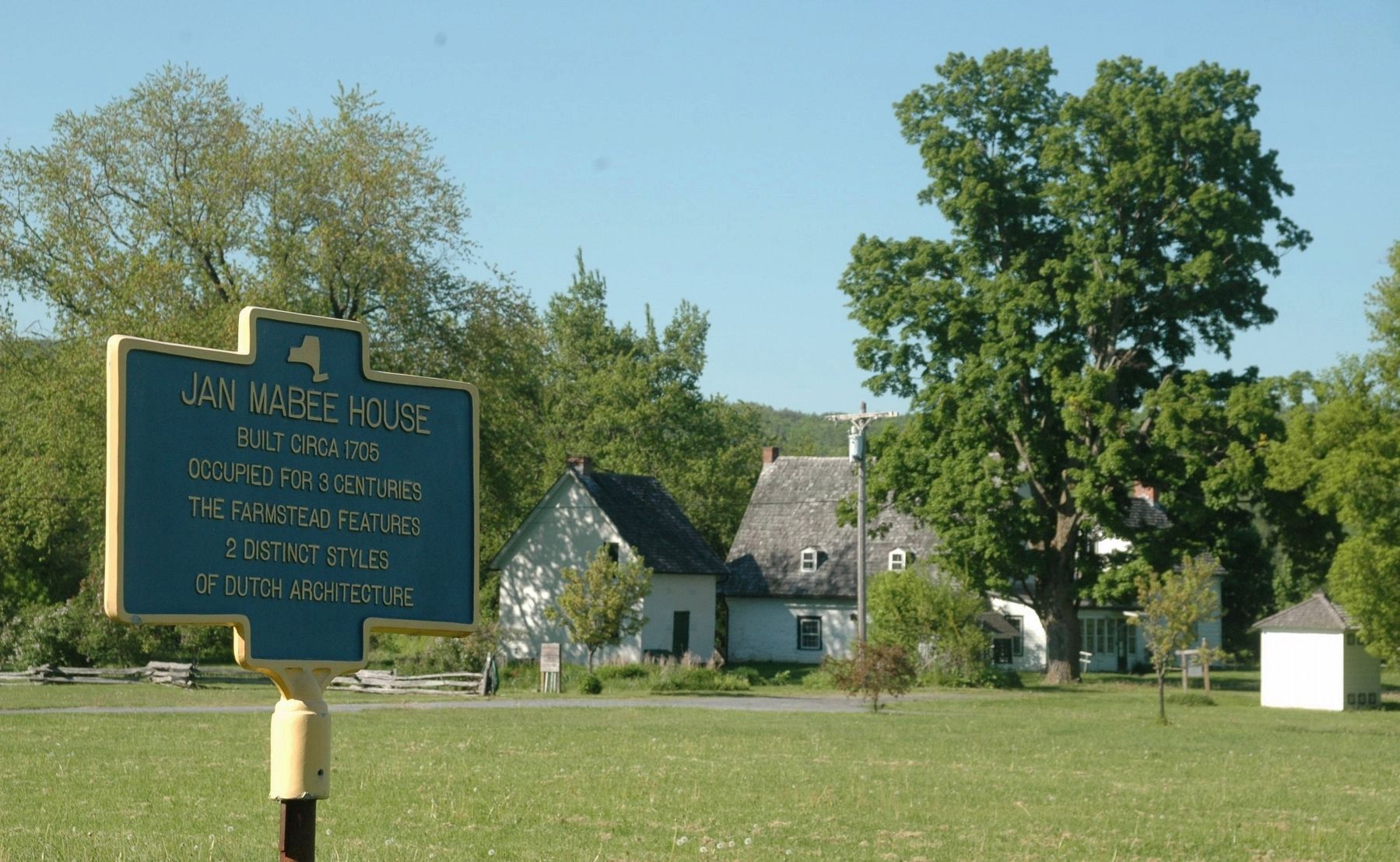 Photographed By Howard C. Ohlhous, May 26, 2020
3. Jan Mabee House Marker with the Mabee House in the Background
a deed for the property in 1671 from the English governor. In 1706, Van Antwerpen sold the farm to Jan Pieterse Mabee, and it was handed down through the Mabee family for 287 years!

George E. Franchere, the last family owner, gave the Mabee Farm to the Schenectady County Historical Society in 1993, along with furnishings, heirlooms, and family papers, many of which are on display.

The Schenectady County Historical Society is continuing to develop the farm site as a museum and educational center for the community and holds Colonial events, workshops, tours and educational programs which reflect the historical significance of this early Mohawk River farmstead. 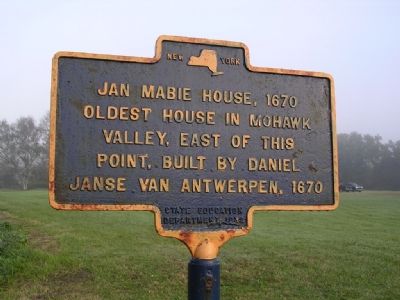 Photographed By Howard C. Ohlhous, January 28, 2007
4. The former Jan Mabie House, 1670 Marker
This marker has been retired and replaced. 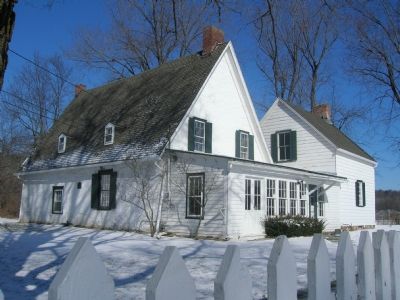 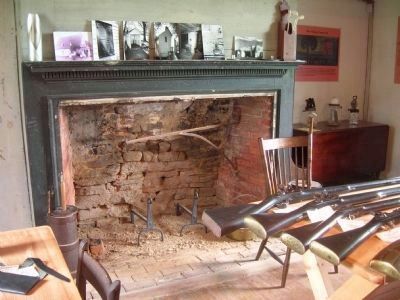 Photographed By Howard C. Ohlhous, June 14, 2008
6. Mabee Farm Inn
This is the fireplace area in a section of the Mabee house that was originally used as an inn. Photos of the farm line the mantle. This part of the house was a separate building until it was joined to the main or "stone" house with the addition of the low-roof porch. 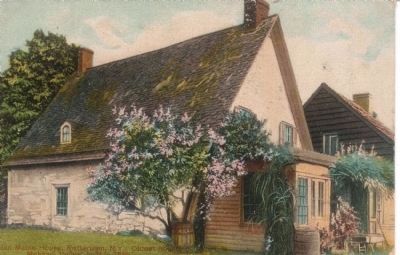 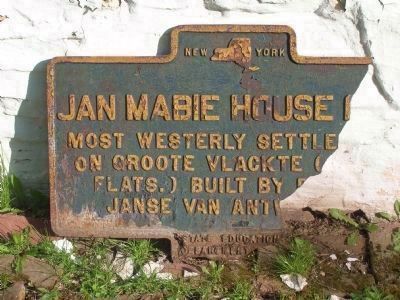 Photographed By Howard C. Ohlhous, May 5, 2008
8. Retired Marker
This was the previous Historic Marker which was apparently broken and set aside. By looking at both sides of the marker we can get the full text: 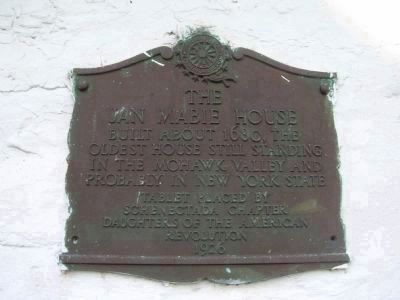 Photographed By Howard C. Ohlhous, May 5, 2008
9. DAR Marker
This DAR Marker is mounted on the side of the Mabee House:

The
Jan Mabie House
Built about 1680, the
oldest house still standing
in the Mohawk Valley and
probably in New York State
Tablet placed by
Schenectada Chapter
Daughters of the American
Revolution
1926
This marker is seen in photo #2, on the left between the two windows on the side of the house. 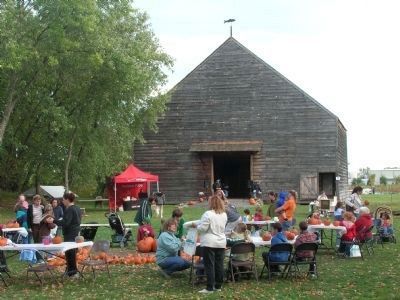 Photographed By Howard C. Ohlhous, October 13, 2007
10. The Nilsen Dutch Barn at the Mabee Farm
The Mabee Farm has a Dutch Barn beside the Jan Mabee House. The Nilsen Barn, a New World Dutch Barn built about 1760 near Johnstown, NY. was moved to the Mabee Farm after 1998 to replace the barns which had burned in the 1900s. It is now used to house displays and exhibits. On the day of this photo there were free pumpkins and paint for decorating pumpkins. 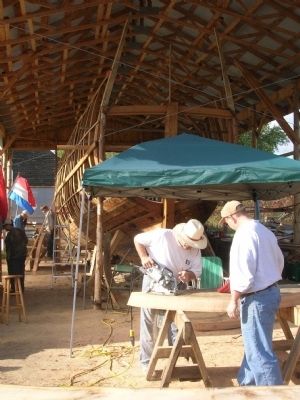 Photographed By Howard C. Ohlhous, October 13, 2007
11. The Onrust under construction
A historically accurate replica of New York's First ship of 1614, The Onrust, is shown here under construction on the Mabee Farm. The men in the photo above were cutting some heavy timbers to be fitted to the boat which is in the background. The boat was launched on May 20, 2009. See link above for more information. 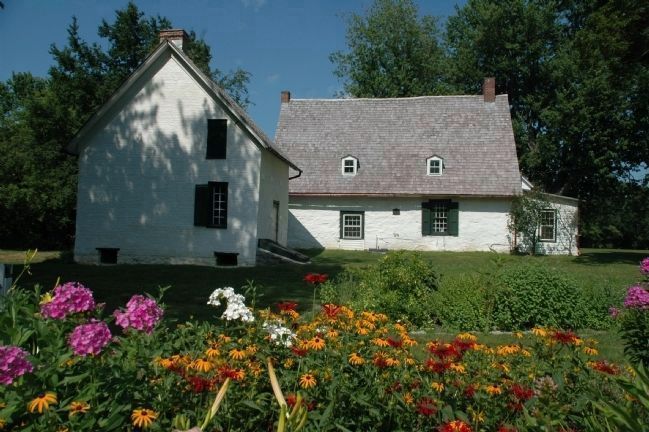 Photographed By Howard C. Ohlhous, July 24, 2011
12. Jan Mabie House
The stone farmhouse is on the right and the brick slaves quarters is to the left. 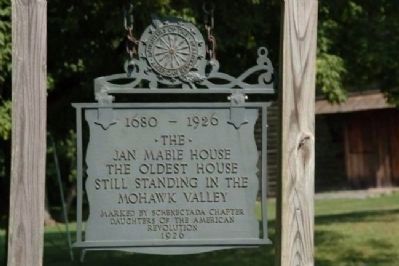