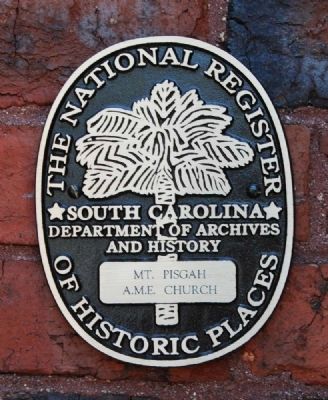 Topics and series. This historical marker is listed in these topic lists: African Americans • Notable Buildings. In addition, it is included in the African Methodist Episcopal (AME) Church series list. 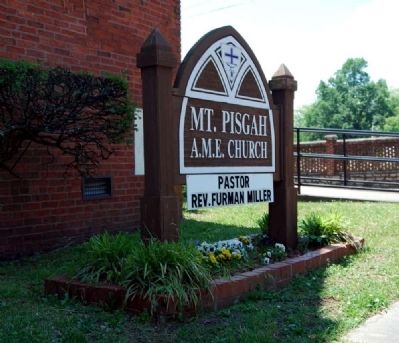 Additional commentary.
1. Mount Pisgah A.M.E. Church - National Register Nomination Form (1979)
Mount Pisgah A.M.E. Church, located within the city limits of Greenwood, South Carolina, was built in 1908 and is believed to have been designed and constructed by members of the congregation. An eclectic structure, the church is exemplary of the vernacular ecclesiastical architecture of the earlier 1880s and 1890s and features Gothic detail.

Exterior: A modified T with projecting chancel, the brick church is set on an enclosed basement. Brickwork is stretcher bond. The structure features a steep 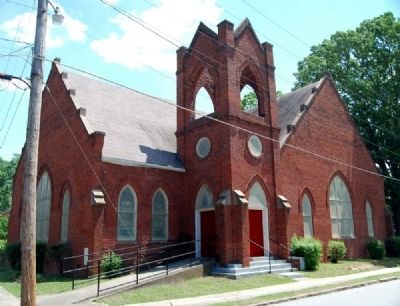 The front facade is characterized by a central projecting gable end wall flanked by an open square porch to the left and by a square tower to the right. Windows in the middle section are arranged in three bays on the gable end walls and in two bays on each side-facing elevation. A large Gothic center pointed window dominates the central bay of the front facade. The square open porch at left is one story and features paired Gothic center pointed doorway openings with corbeled brick hoods on both the front-facing and side-facing elevations. The porch has been altered by the enclosure of the right portion with brick walls to create a bathroom. The square tower at right consists of enclosed of the tower are monumental engaged pilasters with brick corbeling; a brick string course with dentil detail separates the upper and lower portions of the tower. On both the front-facing and side-facing elevations, the lower section of the tower features: a doorway 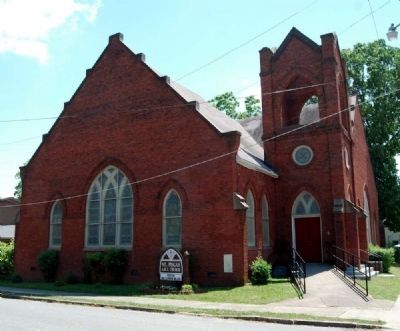 Photographed By Brian Scott, May 6, 2010
4. Mount Pisgah A.M.E. Church -
Northwest Facade
with Gothic center pointed transom with simple bar tracery; a concrete-capped buttress; and an oculus. On all four sides, the open belfry consists of Gothic center pointed openings with corbeled brick hoods, crowned by pointed gables which also have corbeled brick hoods. A steep, tent roofed spire which was removed sometime after 1950, was originally located above the open belfry. The central projecting gable end wall of each side facade is divided into three bays and each rear-facing elevation contains a single bay. A large Gothic center pointed window fills the middle bay of each side facade. The rear facade consists of a projecting gable and wall, arranged in one bay, with a single bay on each side-facing elevation.

The church is distinguished by several elements reflective of the vernacular ecclesiastical architecture of the last two decades of the nineteenth century. These include the asymmetrical massing of the porch and tower and the complex massing within the tower itself; and the steep, multi-gabled roof. Gothic detail is evidenced by the 1/2 center pointed windows, the corbeled brick hoods and by the buttresses.

Interior: Basically symmetrical in plan, the church is exemplary of the auditorium form which was derived during the 1880s and 1890s to meet the needs of American Protestant worship. This auditorium seating effect is heightened by the 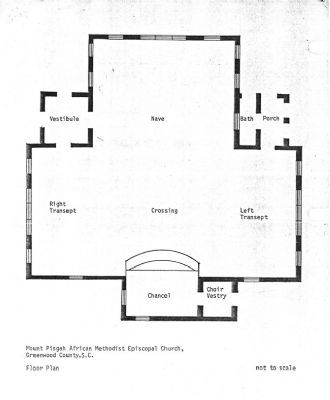 Photographed By Brian Scott, May 6, 2010
5. Mount Pisgah A.M.E. Church -
Floor Plan
sloping of the floor downward and to the center, towards the chancel. The church is comprised of wide, short nave and transept and projecting chancel; the chancel features a raised stepped semi-circular platform which extends forward into the crossing. The small, square room created by the interior of the tower serves as a vestibule and provides access to both the nave and transept. An additional small, square room is located to the left of the chancel and serves as a vestry for the choir.

The Interior retains the original wood flooring, baseboards, vertical tongue and groove wainscoting and chair rail, with plaster walls above. Narrow beaded boards are featured both on the flat coved ceiling of the nave and on the flat coved ceiling of the crossing and transept, where they are arranged in a diagonal pattern. The flat ceiling of the chancel features narrow beaded boards and a deep boxed cornice with heavy dentil detail. Two monumental fluted Corinthian columns separate the nave from the crossing; two asymmetrical arches, supported by a panelled wood pilaster, frame the chancel. Flanking the chancel to the left is a semi-circular arch recessed into the plaster wall. The original pulpit, altar and the balustrade, with turned balusters and newel posts, remain. Also notable are the early lighting fixtures. The curving pews date to the 1800s and are not original to the church. 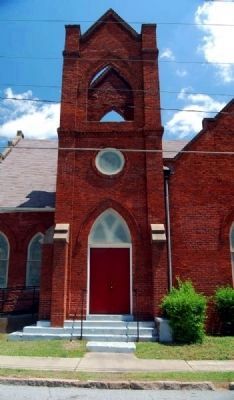 Photographed By Brian Scott, May 6, 2010
6. Mount Pisgah A.M.E. Church -
South Tower Entrance
Mount Pisgah A.M.E. Church is located in a quiet residential setting. Situated on a corner lot, the church is flanked by streets to the front and right. Private residences flank the church to the left and right. No other structures are located on the site.

Significance
Mount Pisgah A.M.E. Church, located in Greenwood, South Carolina, is a late interpretation of the vernacular ecclesiastical architecture of the last two decades of the nineteenth century. The structure also features Gothic detail. Exemplary of the widespread growth of independent black churches which occurred in the South both during and after Reconstruction, Mount Pisgah A.M.E. Church has been an important influence on the religious and educational life of the black community of Greenwood.

The African Methodist Episcopal Church was founded in Philadelphia in 1786 as an outgrowth of the Methodist Episcopal Church. Although originally centered in the North, the A.M.E. Church was active in South Carolina until 1822, when social pressures connected with the issue of separate black churches caused it to withdraw from the South. In 1863, the A.M.E. Church was reestablished in South Carolina and following the Civil War, its membership increased rapidly as blacks began to form independent denominational organizations and congregations. By the end of the Reconstruction Period, the A.M.E. Church 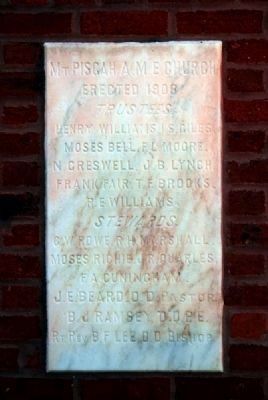 Representative of this growth, the congregation of Mount Pisgah A.M.E. Church was organized during the first decade of the twentieth century. Mount Pisgah was an offshoot of Weston Chapel A.M.E. Church, the mother church of the Greenwood District. Dissenting members of the Weston Chapel congregation sought to establish a new church to be situated in a more centralized location in Greenwood, and they applied to the Annual Conference to be given status as a separate membership. Permission was received, and the membership of the new congregation grew rapidly. By 1908 the land for the church had been purchased, and Mount Pisgah A.M.E. Church was subsequently designed and constructed by members of the congregation. Due to its central location and large size, the church has continued to be used for meetings and community activities.

Architecture: Mount Pisgah A.M.E. Church an eclectic example of the vernacular ecclesiastical architecture of the earlier 1880s and 1890s. Erected in 1908 by members of the congregation, the church also features Gothic detail. Architectural features of note include the steep, cross gabled roof with stepped end gables; the asymmetrical massing of the porch and tower; the 1/1 Gothic center pointed stained glass windows; the auditorium plan; and, the flat coved ceilings of the interior. The church, which presently serves a congregation of 60, has been in continuous since its construction and has been conscientiously maintained. In addition, Mount Pisgah A.M.E. Church is an architectural reminder of the African Methodist Episcopal Church and its importance to the black community in Greenwood.
— Submitted June 25, 2010, by Brian Scott of Anderson, South Carolina.
2. National Register of Historic Places Information
National Register of Historic Places: Mt. Pisgah A.M.E. Church (added 1979 - Building - #79002384)
• Historic Significance: Event, Architecture/Engineering
• Architect, builder, or engineer: Members of the congregation
• Architectural Style: Late Victorian, Other
• Area of Significance: Architecture, Religion, Black
• Period of Significance: 1900-1924
— Submitted June 25, 2010, by Mike Stroud of Bluffton, South Carolina.
Credits. This page was last revised on June 16, 2016. It was originally submitted on June 25, 2010, by Brian Scott of Anderson, South Carolina. This page has been viewed 1,364 times since then and 19 times this year. Photos:   1, 2, 3, 4, 5, 6, 7. submitted on June 25, 2010, by Brian Scott of Anderson, South Carolina.
Share this page.