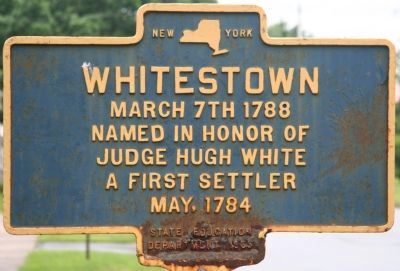 Photographed By Dale K. Benington, June 16, 2010
1. Whitestown Marker
Inscription.
Whitestown. .
March 7th 1788 Named in honor of Judge Hugh White A first settler May, 1784. . This historical marker was erected in 1935 by State Department of Education. It is in Whitesboro in Oneida County New York

Erected 1935 by State Department of Education.

Topics. This historical marker is listed in this topic list: Settlements & Settlers. A significant historical date for this entry is March 7, 1788.

Location. 43° 7.236′ N, 75° 17.37′ W. Marker is in Whitesboro, New York, in Oneida County. Marker is on Main Street west of Victory Parkway, on the right when traveling west. This historical marker is located on the north side of the street, in front of the parking lot for the Dunham Public Library. Touch for map. Marker is at or near this postal address: 74 Main Street, Whitesboro NY 13492, United States of America. Touch for directions. 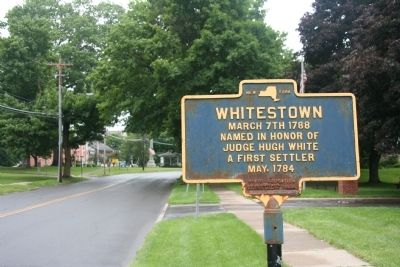 Photographed By Dale K. Benington, June 16, 2010
2. Whitestown Marker
View looking west of historical marker in the right foreground and of Main Street heading into the downtown area on the left side of the picture.