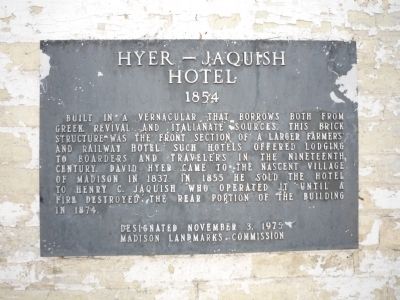 By Bart Cianciolo, September 2, 2009
1. Hyer - Jaquish Hotel Marker
Inscription.
Hyer - Jaquish Hotel. Built in a vernacular that borrows both from Greek revival and Italianate sources, this brick structure was the front section of a larger Farmers’ and Railway hotel. Such hotels offered lodging to boarders and travelers in the nineteenth century. David Hyer came to the nascent village of Madison in 1837. In 1855 he sold the hotel to Henry C. Jaquish who operated it until a fire destroyed the rear portion of the building in 1874. . This historical marker was erected in 1975 by Madison Landmarks Commission; designated November 3. It is in Madison in Dane County Wisconsin

Built in a vernacular that borrows both from Greek revival and Italianate sources, this brick structure was the front section of a larger Farmers’ and Railway hotel. Such hotels offered lodging to boarders and travelers in the nineteenth century. David Hyer came to the nascent village of Madison in 1837. In 1855 he sold the hotel to Henry C. Jaquish who operated it until a fire destroyed the rear portion of the building in 1874.

Topics and series. This historical marker is listed in these topic lists: Industry & Commerce • Notable Buildings. In addition, it is included in the Wisconsin, Madison Landmarks Commission series list. A significant historical year for this entry is 1837. 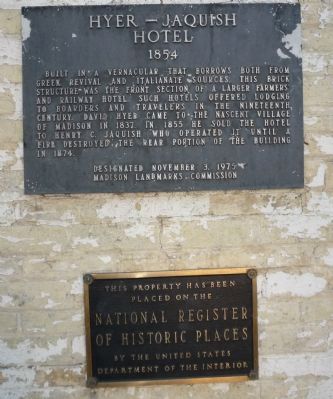 2) Civil War soldiers were quartered at this hotel. “H. C. Jaquish (was) an early settler in Wisconsin on a farm, until the Civil war days, when he conducted the Jaquish hotel in this city on the corner of Jenifer and Patterson Streets. He supplied quarters for the soldiers at the hotel and furnished rations at Camp Randall.” —from “Society News”, The Capital Times, Oct 11, 1931, Vol 28, No 119, p.14

3) The Hyer-Jaquish Hotel is the oldest surviving hotel building in Madison. 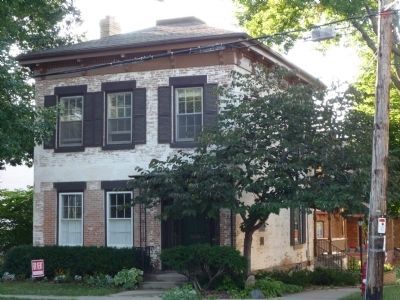 By Bart Cianciolo, September 2, 2009
3. Hyer - Jaquish Hotel
View from Jenifer Street. Marker can be seen to the right of the tree trunk in the foreground.
“The oldest urban hotel building to survive in Madison, this red brick structure was built by David R. Hyer, who arrived in Madison in 1837 to work on the construction of the first Capitol. In 1855, the hotel was purchased by Henry Jaquish for $9,000. It remained in use as a hotel until a fire in 1874, which burned off a large frame wing at the rear. It was then converted to a residence, and the present, much smaller rear wing was constructed. The house rests on a sandstone rubble foundation and the windows and entry have sandstone lintels and sills. The entry is framed by sidelights and a glazed transom.” —Source is Also See link No. 1.

4) A photo on file with the Friends of Historic Third Lake Ridge, possibly taken in the 1860s, shows a second story balcony on the side facing Patterson street. Attached to the brick structure is a long, slightly shorter 2-story frame wing extending along Patterson. —See Also See link No. 2.

5) The Madison city assessor lists the building as a 4,100 sq ft, 3-unit apartment building. Per the website, it was built in 1874 in the Victorian Regency style. —See Also See link No. 3.

6) According to the Madison Landmarks Commission, "The oldest urban hotel building to survive in Madison, Hyer's Hotel was built in 1854 by David and Anna Hyer, who in 1837 came to the site that would become Madison with small group of settlers hired to build the first capitol building. The Hyers' first house downtown was run by Anna as a boarding house. Anna died in 1843 and David ran a hotel/tavern in Deerfield until 1854 when he built his new hotel here on Jenifer Street. Originally the hotel consisted of a two-story Italianate house that remains today, with a large wood frame wing of hotel rooms extending to the rear; behind that was a stable for visitors' horses. Shortly after Hyer built the hotel, however, he sold it to the Jacquish family, who operated the hotel and also had a tavern in the building. A fire in 1874 destroyed the stable and the frame portion of the hotel. After the fire, a small brick wing was built where the hotel wing had been and the house was converted into a single-family residence. The main portion of the building was constructed of Madison's native red brick, which was dug and fired nearby. The local red brick was a very soft brick that was superceded when the railroad arrived, allowing heavy materials, such as Milwaukee's harder 'Cream City' brick, to be used in Madison. From 1910 until his death in 1972, Arthur Schulkamp lived in the house; Schulkamp was active in insurance and banking and was a well-known philanthropist."