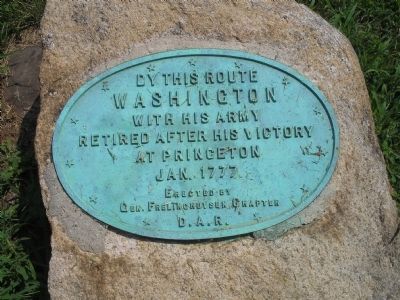 By Bill Coughlin, July 17, 2010
1. Washington’s Route from Princeton to Morristown Marker
Inscription.
Washington’s Route from Princeton to Morristown. .
By this route Washington with his army retired after his victory at Princeton Jan. 1777., Erected by Gen. Frelinghuysen Chapter D.A.R. . . This historical marker was erected by Daughters of the American Revolution. It is in Bridgewater in Somerset County New Jersey

By this route
Washington
with his army
retired after his victory
at Princeton
Jan. 1777.

Topics and series. This historical marker is listed in these topic lists: Notable Buildings • War, US Revolutionary. In addition, it is included in the Daughters of the American Revolution series list. A significant historical month for this entry is January 1777.

Other nearby markers. At least 8 other markers are within 3 miles of this marker, measured as the crow flies. Jacob Vosseller House (within shouting distance of this marker); Bridgewater Township Historic Monument (approx. 1.1 miles away); Bolmer Farm House - 1754 (approx. 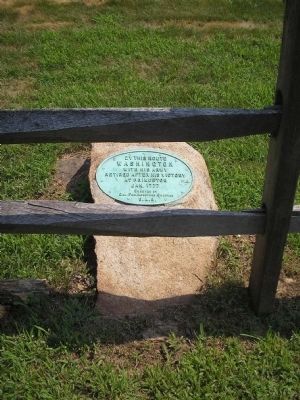 Related markers. Click here for a list of markers that are related to this marker. A list of markers along the route Washington’s Army took from Princeton to Morristown. It's best to study them in the order shown.

Also see . . .  New Jersey During the Revolution. Website that details the Revolutionary War in New Jersey. Included are the Battle of Princeton and the encampments at Morristown. (Submitted on July 17, 2010, by Bill Coughlin of Woodland Park, New Jersey.) 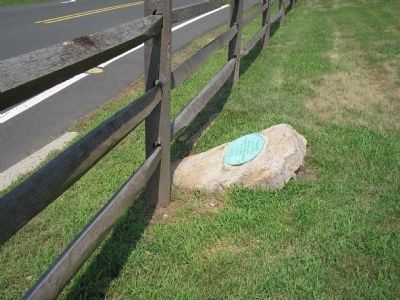 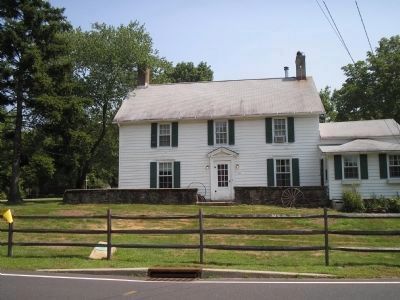