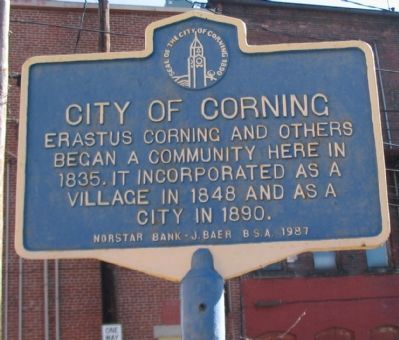 Topics. This historical marker is listed in this topic list: Settlements & Settlers. A significant historical year for this entry is 1835.

Location. 42° 8.556′ N, 77° 3.148′ W. Marker is in Corning, New York, in Steuben County. Marker is at the intersection of Cedar Street (New York State Route 414) and Denison Parkway East (New York State Route 352), on the right when traveling north on Cedar Street. It is located across from the Rockwell Museum of Western Art. Touch for map. Marker is in this post office area: Corning NY 14830, United States of America. Touch for directions. 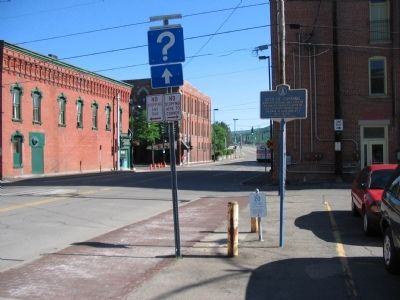 More about this marker. The marker was moved about 20 feet south of its 2010 location sometime between 2010 and 2015, and its orientation turned 90 degrees to parallel Cedar Street.

Also see . . .  History of the City of Corning, NY. “Indeed these first years of village history witnessed many improvements and wonderful changes, and in 1836 there was sufficient importance in the settlement to warrant a name for the hamlet. It was called Corning, in honorable allusion to Erastus Corning, founder in fact of the company and one of the chief promoters of the enterprise. The purchase tract was surveyed and laid out into lots, and all needful things were provided to build up a progressive settlement. However, one of the first acts of the company was to ascertain the possibility of a successful line of railroad between the canal terminus and the rich Blossburg coal fields. To be sure, the Tioga river afforded moderate facilities for transportation at certain periods, yet it proved a somewhat slow and occasionally unreliable thoroughfare of traffic. To overcome the objections a survey was made to the State line, up the 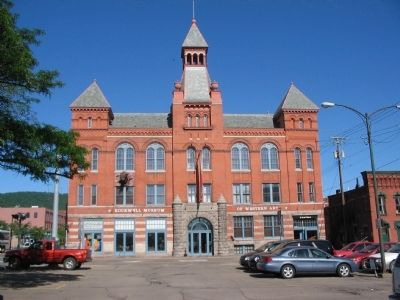 By Craig Swain, May 30, 2010
3. Rockwell Museum of Western Art
valley of the river, and being practicable the energetic company constructed the road to that point, and there joined with the road built by a similar company of Pennsylvania operators. In 1839 the first locomotive traversed the Tioga valley, and the future success and growth of our little village became assured.” (Submitted on January 1, 2015.) 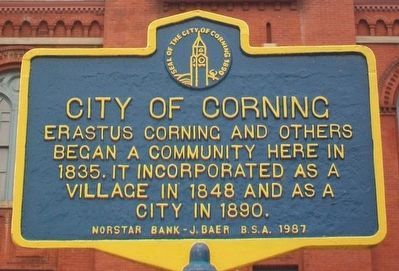 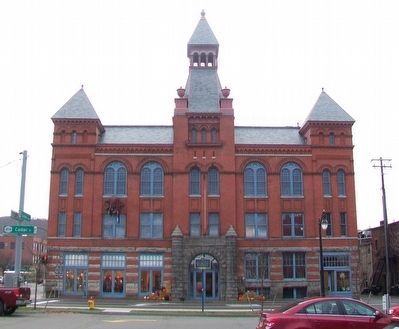