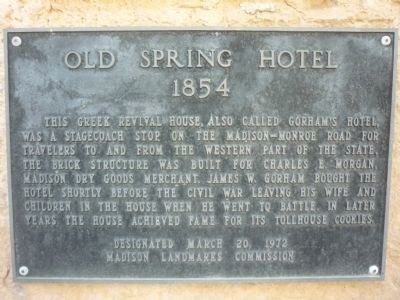 By Diane Booth, July 10, 2010
1. Old Spring Hotel Marker
Inscription.
Old Spring Hotel. This Greek Revival house, also called Gorham’s Hotel, was a stagecoach stop on the Madison-Monroe Road for travelers to and from the western part of the state. The brick structure was built for Charles E. Morgan, Madison dry goods merchant. James W. Gorham bought the hotel shortly before the Civil War leaving his wife and children in the house when he went to battle. In later years the house achieved fame for its tollhouse cookies. . This historical marker was erected in 1972 by Madison Landmarks Commission. It is in Madison in Dane County Wisconsin

This Greek Revival house, also called Gorham’s Hotel, was a stagecoach stop on the Madison-Monroe Road for travelers to and from the western part of the state. The brick structure was built for Charles E. Morgan, Madison dry goods merchant. James W. Gorham bought the hotel shortly before the Civil War leaving his wife and children in the house when he went to battle. In later years the house achieved fame for its tollhouse cookies.

Topics and series. This historical marker is listed in these topic lists: Industry & Commerce • Notable Buildings. In addition, it is included in the Wisconsin, Madison Landmarks Commission series list.

Location. 43° 2.998′ N, 89° 26.239′ W. Marker is in Madison, Wisconsin, in Dane County. Marker is at the intersection of Nakoma Road and Monroe Street, on the right when traveling south on Nakoma Road. The marker is located on a stone wall. Touch for map. Marker is at or near this postal address: 3706 Nakoma Road, Madison WI 53711, United States of America. Touch for directions. 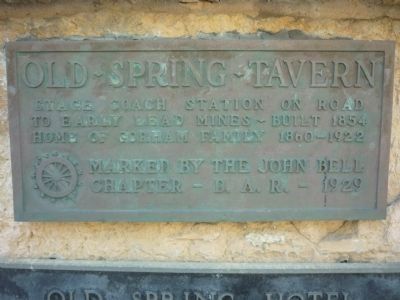 Regarding Old Spring Hotel. The Spring Tavern is the oldest building in Nakoma and one of the oldest in Madison. It was built by Charles Morgan, a native of Connecticut who came to the western frontier to improve his health. From 1860 to 1895, the Gorham family used the building as an inn, serving travelers journeying between Milwaukee and Platteville on the historic road of which Nakoma Road is now a part. The Tavern sits on a large, steeply sloping lot. Its most visible facade, the one with the two-story veranda added in the 1920s, faces east toward Nakoma Road, but the Council Crest side is the original front of the house. This fine example of the Greek Revival style is built of brick made from clay dug from the slope behind the house and fired in a kiln that Morgan erected near the Duck Pond just across Nakoma Road. Typical Greek Revival features include returned eaves, 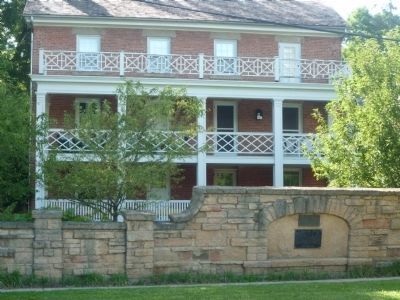 By Diane Booth, July 10, 2010
3. Old Spring Hotel/Tavern
Photo of house and plaques on wall designed by Frank Lloyd Wright.
multi-light double-hung windows, and a main door enframed with side lights and a transom light above.
Source: Madison Landmarks Commission
http://www.cityofmadison.com/planning/landmark/Madison%20Landmarks.htm

The Monroe Road was the first public road designated by the territorial legislature in 1838 and one of only 18 territorial mail routes. The route, which roughly corresponds to the present Highway 69, actually followed American Indian trails as far south as Freeport, Illinois.

Originally the old stage road passed to the northwest of the house in what is now the rear yard. The current Nakoma Road was built later between the house and the spring. The spring is now part of the University Arboretum, a duck pond draining into Lake Wingra. 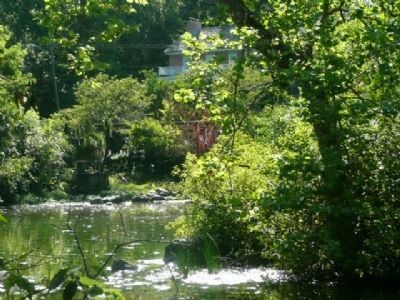 By Bart Cianciolo, July 17, 2010
4. Old Spring
Spring and duck pond, now part of the University Arboretum. House is visible in the background.
Council Crest. The current entry faces Nakoma Road and the spring. In the 1920’s, a two-story Chippendale porch was added to the front of the house overlooking the spring.

As part of the same restoration work, a stone wall, designed by Frank Lloyd Wright, was built around the front and sides of the tavern. On completion in 1929, the DAR marked the house with a plaque placed on the stone wall.

The remaining acreage became “Gorham Heights” in the Nakoma subdivision, a planned community developed in the 1910s and '20s. The tavern building itself remained outside of Madison city limits, which ended at the Edgewood campus, until Nakoma was incorporated into Madison.

The Ho Chunk had a village on the ridge behind the tavern and six prehistoric mounds have been found on the property, each containing a skeleton and artifacts.

The building’s architectural materials include reddish-pink brick made from clay on the site, and solid oak beams, probably also from the site. The tavern was originally heated by Franklin stoves and had no fireplaces.

During World War II, the owners maintained a Red Cross workroom in the house. This may account for the reference to tollhouse cookies. 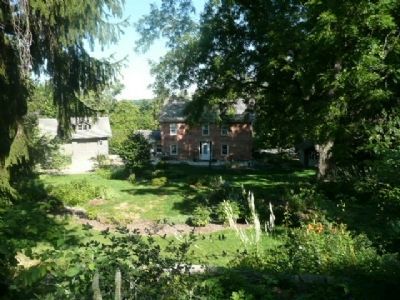 Also see . . .  The landmark nomination form for the Old Spring Hotel/Tavern. (Submitted on July 27, 2010, by Diane Booth of Madison, Wisconsin.)

Additional comments.
1. Correction to description of photo #5.
The outbuilding to the left in the bottom photo is actually a completely new building, a 2-car garage I designed a number of years ago (don't remember the exact date) to be historically compatible in appearance with the Old Spring Tavern building. The attached one-story (from this side) portion of the Old Spring Tavern building was originally built to be a summer kitchen, then converted to a garage some time prior to WWII. At the same time as the new garage was built, that garage was restored to once again become the kitchen. The restoration project included a new below-ground tunnel connecting the lowest floor of the Old Spring Tavern with the lowest floor of the new garage building. Note To Editor only visible by Contributor and editor
— Submitted November 28, 2019, by Mark Hinrichs of Madison, Wisconsin.
Credits. This page was last revised on November 29, 2019. It was originally submitted on July 22, 2010, by Diane Booth of Madison, Wisconsin. This page has been viewed 1,676 times since then and 64 times this year. Last updated on July 26, 2010, by Diane Booth of Madison, Wisconsin. Photos:   1, 2, 3, 4, 5. submitted on July 22, 2010, by Diane Booth of Madison, Wisconsin. • Kevin W. was the editor who published this page.
Share This Page.