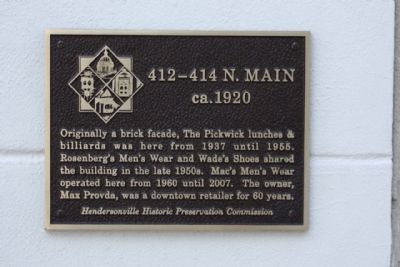 Photographed By Mike Stroud, May 23, 2010
1. 412-414 N. Main Marker
Inscription.
412-414 N. Main. . ca.1920 , Originally a brick facade, the Pickwick lunches and billiards was here from 1937 until 1955. Rosenberg's Men's Wear and Wade's Shoes shared the building in the late 1950s. Mac's Men's Wear operated here from 1960 until 2007. The owner, Max Provda, was a downtown retailer for 60 years. . This historical marker was erected by Hendersonville Historic Preservation Commission. It is in Hendersonville in Henderson County North Carolina

Topics. This historical marker is listed in these topic lists: Industry & Commerce • Notable Buildings. A significant historical year for this entry is 1920. 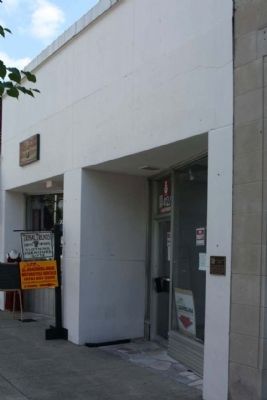 Regarding 412-414 N. Main. Max Provda bravely served his country during World War II as a medic in the Army and while stationed at Camp Swift near Austin, Texas met his future bride, Janet Rosenberg. He served in the Aleutians and in the European theater.

Max and Janet married on March 24, 1946 at the Skyland Hotel in Hendersonville and they honeymooned at the Grove Park Inn in Asheville. He joined his father-in-law, Jake Rosenberg, in his men’s clothing store located on Main Street next to the Carolina Theater. In 1957, the store was renamed Mac’s Men’s Wear. Max was a pioneer in the big and tall business in Western North Carolina. He enjoyed owning and operating his business until his retirement in 2007. He received numerous honors, including Merchant of the Year. He loved being a merchant and was always trying to improve downtown Hendersonville and assist his customers and fellow merchants.
Credits. This page was last revised on June 16, 2016. It was originally submitted on July 27, 2010, by Mike Stroud of Bluffton, South Carolina. This page has been viewed 551 times since then and 19 times this year. Photos:   1, 2. submitted on July 27, 2010, by Mike Stroud of Bluffton, South Carolina.
Share this page.