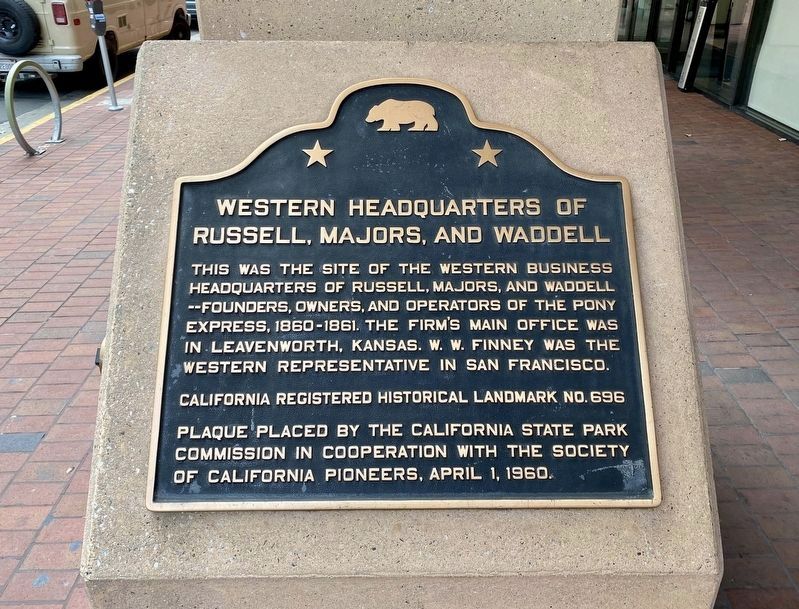 This was the site of the western business headquarters of Russell, Majors, and Waddell -- founders, owners, and operators of the Pony Express, 1860-1861. The firm's main office was in Leavenworth, Kansas. W.W. Finney was the western representative in San Francisco.

Plaque placed by the California State Park Commission in cooperation with the Society of California Pioneers, April 1, 1960.

Topics and series. This historical marker is listed in these topic lists: Communications • Notable Places. In addition, it is included in the California Historical Landmarks, and the Pony Express National Historic Trail series lists. A significant historical date for this entry is April 1, 1850.

Photographed By Photocopy Of Microfilm Of Newspaper, May 21, 1860
2. Pony Express Ad (Sacramento Union, May 21, 1860, p. 4)
This ad in the Sacramento Union (click on picture for a better view) advertises delivery of messages from San Francisco to New York in eight days by the Pony Express of the "Central Overland California and Pike's Peak Express". As noted, "Letters will be received at San Francisco until 4 o'clock P.M. each day of departure. Office, Alta Telegraph Office, 153 Montgomery Street, corner Merchant Street."

Click or scan to see
this page online
. Touch for map. Marker is at or near this postal address: 601 Montgomery Street, San Francisco CA 94111, United States of America. Touch for directions.

Also see . . .  The Founders. XPHomestation.com's overview of Russell, Majors, and Waddell - the founders of the Pony Express. (Submitted on August 1, 2010.) 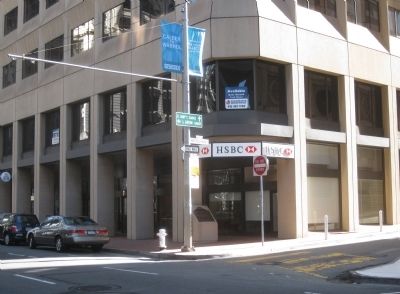