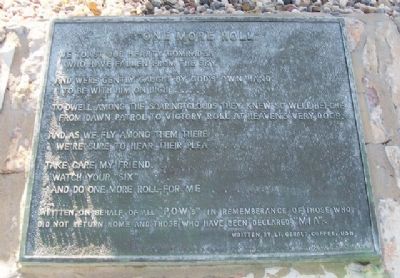 We toast our hearty comrades
who have fallen from the sky.....

And were gently caught on God's own hand
to be with him on high.....

To dwell among the soaring clouds
they knew so well before
From Dawn Patrol to Victory Roll at Heaven's very door.

And as we fly among them there
We're sure to hear their plea.....

Written on behalf of all "POW's" in remembrance of those who did not return home and those who have been declared "MIA".

Topics. This memorial is listed in this topic list: Air & Space.

Location. 29° 23.345′ N, 98° 36.994′ W. Marker is in Lackland Air Force Base, Texas, in Bexar County. Memorial is at the intersection of Kenly Avenue and Truemper Street, on the right when traveling north on Kenly Avenue. Memorial is on the former site of Chapel No. 1. Access is restricted due to Lackland AFB being an active military installation. Touch for map 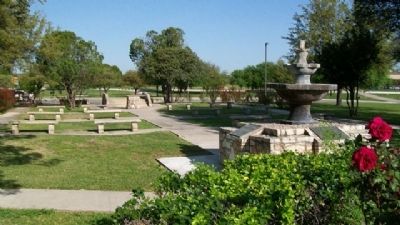