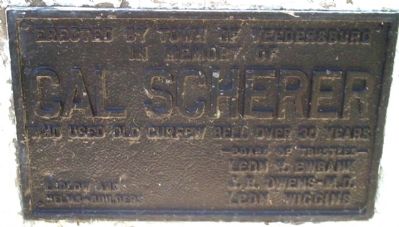 Erected by the town of Veedersburg in memory of Cal Scherer who used old Curfew Bell over 30 years.

Erected by Town of Veedersburg.

Topics and series. This historical marker is listed in these topic lists: Communications • Landmarks • Railroads & Streetcars. In addition, it is included in the Historic Bells series list. 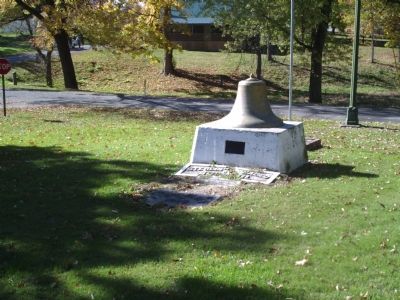 Photographed By Al Wolf, January 1, 2000
2. Veedersburg's Curfew Bell
Marker is on the front of the concrete base. The monument is at the entrance of Hub Park. There are also school markers which have been placed at the part that were from local community schools buildings that no longer exist: "Stone Bluff" and "Sterling".

Regarding Curfew Bell. Calvin H. Scherer (called “Cal” by all the townspeople) was the night policeman—the cop—for the railroad Town of Veedersburg, Indiana; its turn-of-the-Century law man.

Veedersburg was a railroad hub with both north/south and east/west railroads. During its heyday there was a passenger train every hour day and night with two train depots serving the public.

“Ole” Cal Scherer, as night cop, had a kind heart but a firm hand with locals and travelers. It was even known by “the boys” in Chicago to mind youself in Veedersburg. The Town lock up housed those (locals and travelers alike) that had social problems.

During his night duty Cal would rattle every door twice each night making sure they were locked. He took mail to the night trains—and delivered to the Post Office the incoming mail. He escorted home 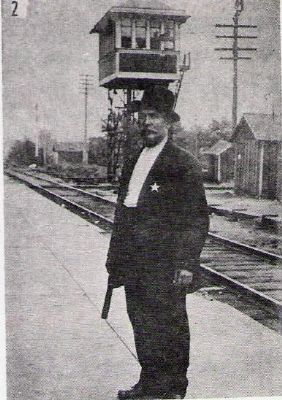 3. "Cal" – Calvin H. Scherer
His influence and service to the community was appreciated, respected, and honored with this marker.
“damsels” of all ages, who arrived alone on the late trains.

At 9:00 P.M. each night he rang the Curfew Bell. Young people were moved along home. Slow movers would get his personal attention—right to their front door. He never lost a bent ear in the process.

The “Curfew Bell” rang for the last time at his funeral in 1935. Thereafter it hung mute over the Veedersburg Town Office.

In the 1940’s the town trustees (Leon L. Ewbank, L. R. Owens M.D., and Leon Wiggins) and the citizens of Veedersburg honored Ole Cal by the building of the concrete base and mounted the Curfew Bell at the entrance of Hub Park.

Related marker. Click here for another marker that is related to this marker. "Veedersburg - Home of Brick Yard" 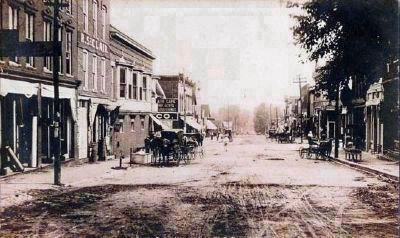 circa 1905
4. Veedersburg:: Main Street - looking South
Photo taken (cira 1905) from the middle of the 100 block North on Main Street - looking South. The cross street (in middle of photo) is now U.S. 136 a.k.a. Second Street. This location was within two blocks of two railroad depots. As time progressed the dirt and gravel streets were laid with Veedersburg paver bricks which are now under the current black top surface. The R. (Robert) St.Clair Buggy Shop on the left stopped buggy repairs and in 1915 John L. Osborn established the first Ford Agency in the county. An opera house was operated next door, to the North, on the second and third floors.
were taken up about 15 years ago.

The railroads changed names periodically during the 19th and 20th century. During “Cal” Scherer’s time, the best guess for the east/west line was the “Bee Line”, later called the “Big Four” for the Cleveland, Cincinnati, Chicago & St. Louis Railway (CCC&StL). Another east/west line in Scherer's day, the New York, Chicago & St. Louis Railroad was once part of the Clover Leaf Route. It became part of the “Nickel Plate Road” in 1922.

The north/south line was the Chicago, Attica, & Southern, affectionately known as “Coal, Ashes & Soot.” Reorganized from parts of the old Chicago and Eastern Illinois Railway (CE&I) in 1922, the CA&S was never financially strong and was completely abandoned in 1946.

Towards the end of the passenger train era in the 20th century, Veedersburg was still served by three long distance passenger trains a day in each direction, although all of the “locals” (short distance trains) were gone, as was direct service to Chicago. The Nickel Plate had a fast train with dining cars and sleepers between St. Louis and Cleveland, while the New York Central ran sections of its Chicago/New York/Boston New York Special and Interstate Express between Indianapolis and Peoria through Veedersburg. 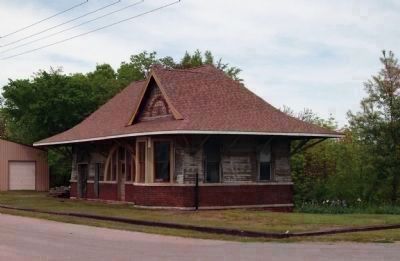 Photographed By Al Wolf, May 22, 2008
5. Nickle Plate (Clover Leaf) N/S Railroad
Located on 2nd Street (U.S. Route 136) and Railroad Street - this photo was taken from south of the depot. A second set of N/S tracks ran parallel and its train stopping at the New York Central crossing using the North extension of that depot.
— Submitted November 8, 2007.
2. Railroads through Veedersburg
The Chicago Attica and Southern (CA&S) was not part of the Nickel Plate railroad. The depot in picture #5 was the Nickel Plate Depot. The depot in picture #6 was used by the New York Central that ran East and West, and also for the CA&S that ran North and South. Picture #6 is before the depot was divided into two separate depot’s. The station’s employees of the NYC and CA&S where having a disagreement over how loud the CA&S employee was playing his radio.

The CA&S ran from Chicago to Brazil Indiana. It ran though Attica, Veedersburg, Yeddo, Kingman and Tangier. The old line can still be see running along Indiana Avenue and along Shale Pit Road. Bridge abutment's are still present just east of the Nickel Plate bridge abutments on the south side of Veedersburg. In Attica, the lumber yard office building is the old CA&S depot. The rail line still is present going to Harrison Steel in Attica. The line can be followed south out of Veedersburg into Kingman and in places south of Tangier.

The Nickel Plate railroad is the old Clover Leaf railroad, which was a narrow gauge railroad. The Clover Leaf was changed from a narrow gauge line to the standard width of 4' 8½" all in ONE DAY. They had work crews working simultaneously on ten mile 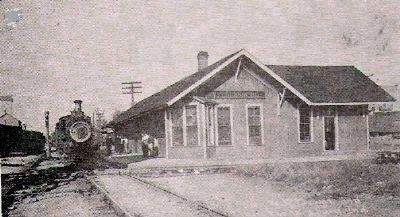 circa 1930s
6. New York Central, (Big 4), (Bee Line) Depot (East/West) -and- C.A.S. (attached) Depot (North/South)
Looking West the steam locomotive is on the New York Central tracks headed East. There are cross tracks at the combo Depot (North/South) with the right (North) end of the Depot used by C.A.S. until that wing was removed. There was train traffic twenty four hours a day. Due to the traffic, the Town of Veedersburg had four hotels, and fourteen taverns. Cal Scherer helped all with kindness and a strong jail for the less cooperative.
sections of the track.

Editor's note: Changes made to this page now reflect this information. Thank you for your help to improve this entry.
— Submitted May 27, 2008, by Robert W. McElwee of Veedersburg, Indiana.
3. Robert IS RIGHT.
Thank You Robert, Best info so far! Other source agrees with your info.

All info is welcome! With more good help like Robert's hopefully Veedersburg's Railroad History will be sorted out.
— Submitted May 30, 2008, by Al Wolf of Veedersburg, Indiana. 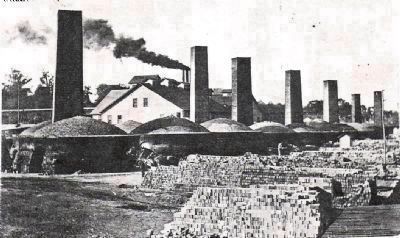 circa 1900s
7. Wabash Clay Co. — Brick Kilns — Veedersburg Paver Bricks
The town of Veedersburg is inter-woven with its paver bricks, railroads, and the roots of law enforced by Cal Scherer. This is the South brick yard. Another one existed on the West edge of Veedersburg. Bricks from Veedersburg built many places including the Indianapolis 500 mile track, the Chicago "Loop", and many other streets throughout the U.S.. Some names stamped on the bricks are: Wabash Clay, Poston, Culver, and Veedersburg(h). 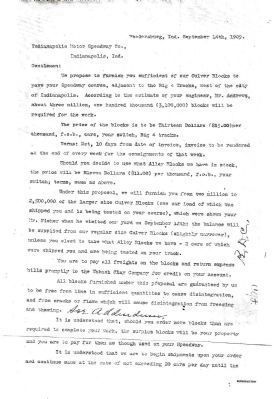 Veedersburg Historical
8. Page One - - Contract :: Bricks for the Indy 500 Track
(Click photo to see details) In 1909 the Veedersburg, Indiana brick yard was known as the "Wabash Clay Company" producing the "Culver" paving bricks (which was then called "blocks"). Carl Fisher, President of the "Indianapolis Motor Speedway" visited the Veedersburg brick yard plant on September 12, 1909. (Continued in next photo) 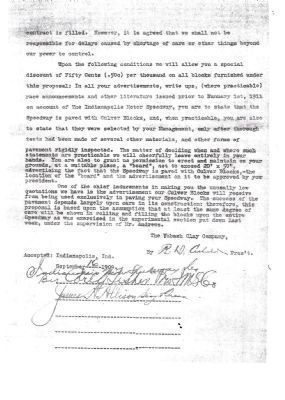 Veedersburg Historical
9. Page Two - - Contract :: Bricks for the Indy 500 Track
(Click photo to see details.) This proposal was made dated September 14, 1909 by the "Wabash Clay Company" to supply exclusively all the "Speedway Bricks" based on special terms (advertising). The proposal was accepted and dated September 16, 1909 by Carl Fisher, President and James Allison Sec/Treas. - Indianapolis Motor Speedway Inc.. The rest is history..... 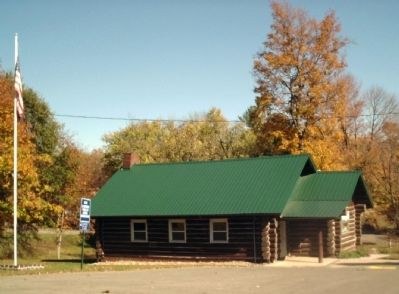 Photographed By Al Wolf, November 3, 2007
10. "Scout Cabin" in Hub Park — Veedersburg, Indiana.
In the mid-1930's the "W.P.A." workers built the "Scout Cabin". The local project manager was Guy Smith of Veedersburg. It is a full log constructed building with one Black Walnut log on the bottom and the rest Sycamore. An original full hearth rustic fire place is still used. The cabin was built for the community with the stipulation the Boy Scouts were to always have priority in using it for their activities—as their leaders so desired. The cabin is also used by the general public. 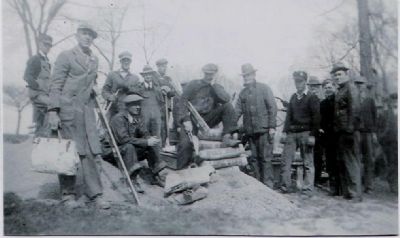 1934 Photo
11. Building the Scout Cabin
Crew of local men working on the foundation pause to pose for the photograper. Bricks for the foundation and floor supplied by the Veedersburg Paving Co. (Click on the photo to see full size.) 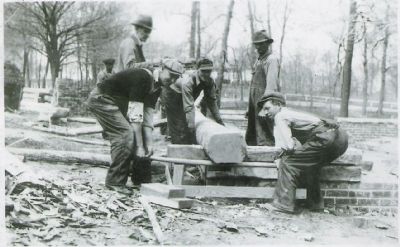