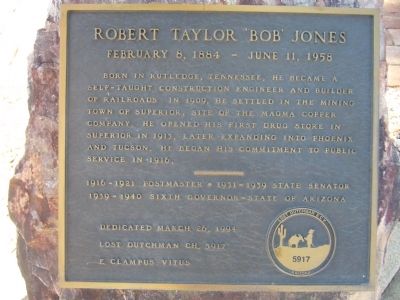 Born in Rutledge, Tennessee, he became a self-taught construction engineer and builder of railroads. In 1909, he settled in the mining town of Superior, site of the Magma Copper Company. He opened his first drug store in Superior in 1913, later expanding into Phoenix and Tucson. He began his commitment to public service in 1916.

Topics and series. This historical marker is listed in this topic list: Government & Politics. In addition, it is included in the E Clampus Vitus series list. A significant historical year for this entry is 1909.

Location. 33° 17.618′ N, 111° 5.903′ W. Marker is in Superior, Arizona, in Pinal County. Marker is on Main Street, on the right when traveling west. Marker is located in front of the Robert Taylor Museum at the intersection of Main Street and North Neary Avenue. Touch for map. Marker is

Click or scan to see
this page online
at or near this postal address: 300 Main Street, Superior AZ 85173, United States of America. Touch for directions.

Other nearby markers. At least 5 other markers are within 11 miles of this marker, measured as the crow flies. US 60 History Trail (approx. 0.6 miles away); Historic Pinal Cemetery (approx. 2.1 miles away); What is the Story Behind the Picketpost House? (approx. 3.3 miles away); Picket Post Mountain (approx. 3.4 miles away); Sonora, Arizona (approx. 10.4 miles away).

Businessman Robert T. Jones had the reins of the state government for one term (1939-1941) as Arizona slowly recovered from the Great Depression.
Jones, a civil engineer, came to the Arizona Territory in 1909 to help in the building of the Southern Pacific Railroad, having learned his trade on construction projects in Mexico and the Panama Canal. He went into business opening a drug store in Tucson, then a larger one in Phoenix, later also operating a cattle ranch near Chandler. In 1953, he opened Jones Western Wear in Phoenix.
Source: http://www.mcdonaldlawaz.com/aroundaz/graves.htm#jones 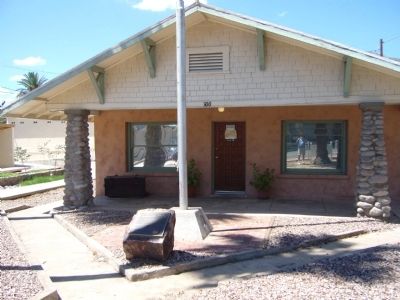 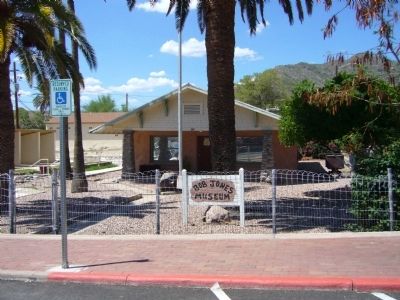