One Of the First Four Roller Mills in California 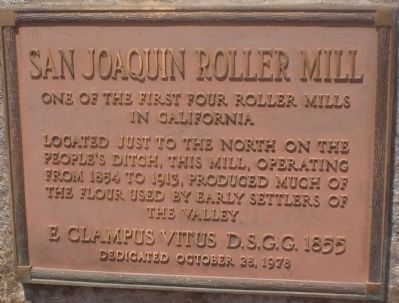 Photographed By Lester J Letson, August 15, 2010
1. San Joaquin Roller Mill Marker
Inscription.
San Joaquin Roller Mill. One Of the First Four Roller Mills in California. Located just to the north on the People's Ditch, this mill, operating from 1854 to 1913, produced much of the flour used by early settlers of the valley . This historical marker was erected in 1978 by Dr. Samuel Gregg George Chapter 1855, E Clampus Vitus.. It is in Exeter in Tulare County California

Located just to the north on the People's Ditch, this mill, operating from 1854 to 1913, produced much of the flour used by early settlers of the valley

Topics and series. This historical marker is listed in these topic lists: Industry & Commerce • Settlements & Settlers. In addition, it is included in the E Clampus Vitus series list. A significant historical year for this entry is 1854. 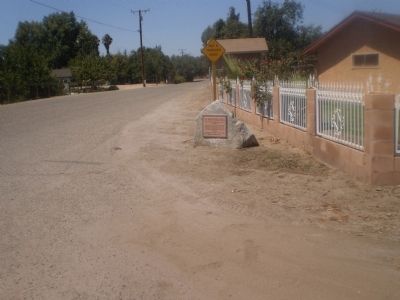 More about this marker. The marker was originally erected on the Highway 198 right-of-way in 1978. A trip to view and clean markers in July of 2005 found that the marker was no longer where it had been originally placed along the highway. While standing at the site of the marker, one of the group spied the marker across the highway on Drive 182. Apparently Cal Trans employees had gotten a local homeowner to agree to have the marker placed in front of their property about 30 yards away from the original spot when the highway was widened some years back. The Clampers of Tulare County breathed a sigh of relief to see the marker nicely displayed close by the original location.

Regarding San Joaquin Roller Mill. Historical references point to John Firebaugh, who was credited as the founder of Exeter, as being the one that built the roller mill, but further research shows that he would have been 8 years old in 1854 when the mill started. What is known is that John Firebaugh and partners were once owners of the mill. 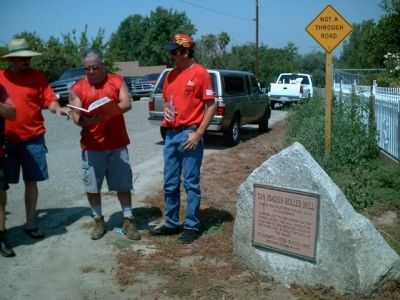 Photographed By Lester J Letson, July 16, 2005
3. Found the San Joaquin Roller Mill Marker
Relieved Clampers after finding the marker across the highway from its original location in 2005. 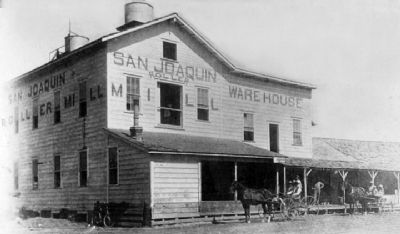 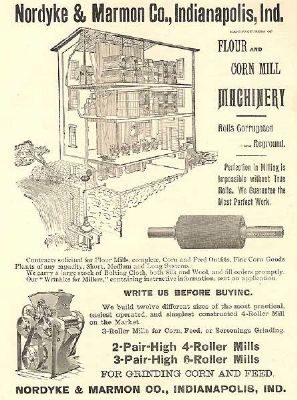 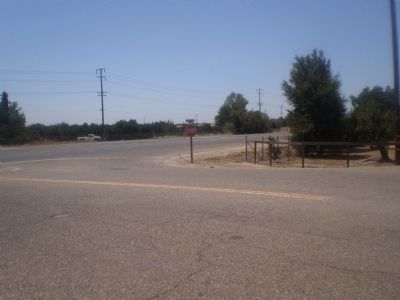