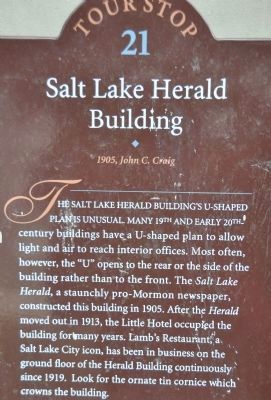 The Salt Lake Herald Building's U-shaped plan is unusual. Many 19th and early 20th-
century buildings have a U-shaped plan to allow light and air to reach interior offices. Most often, however, the "U" opens to the rear or the side of the building rather than to the front. The Salt Lake Herald, a staunchly pro-Mormon newspaper, constructed this building in 1905. After the Herald moved out in 1913, the Little Hotel occupied the building for many years. Lamb’s Restaurant, a Salt Lake City icon, has been in business on the ground floor of the Herald Building continuously since 1919. Look for the ornate tin cornice which crowns the building.

Topics and series. This historical marker is listed in this topic list: Notable Buildings. In addition, it is included in the Utah, Salt Lake City Downtown Walking Tour series list. A significant historical year for this entry is 1905. 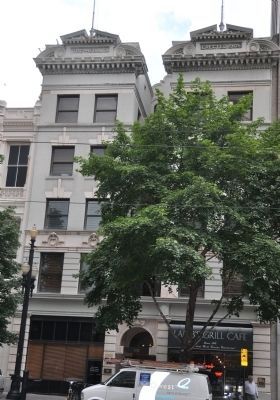 Click or scan to see
this page online
is on Main Street, on the right when traveling north. Touch for map. Marker is at or near this postal address: 169 South Main Street, Salt Lake City UT 84111, United States of America. Touch for directions.

More about this marker. This building is Tour Stop 21 on the Utah Heritage Foundation Downtown Walking Tour.