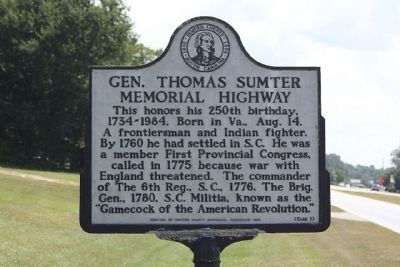 Photographed By Mike Stroud, September 7, 2010
1. Gen. Thomas Sumter Memorial Highway Marker
Inscription.
Gen. Thomas Sumter Memorial Highway. . This honors his 250th birthday, 1734-1984. Born in Va., Aug. 14. A frontiersman and Indian fighter. By 1760 he had settled in S.C. He was a member First Provincial Congress, called in 1775 because war with England threatened. The commander of The 6th Reg., S.C., in 1776, The Brig. Gen., S.C. Militia, known as the "Gamecock of the American Revolution." , (Reverse text) , War won, he returned to his Stateburg plantation and business. He sought pensions for veterans. He was elected to; S.C. Assembly, 1782, Continental Congress, 1783, U.S. Congress 1789 93, 1797-1801, and the U.S. Senate, 1801- 1810. Sumter served under our first three presidents, Washington, Adams, and Jefferson and known as a strong States Rights man. . This historical marker was erected in 1986 by Sumter County Historical Commission. It is in near Sumter in Sumter County South Carolina

Topics and series. This historical marker is listed in these topic lists: Government & Politics • Patriots & Patriotism • War, US Revolutionary. 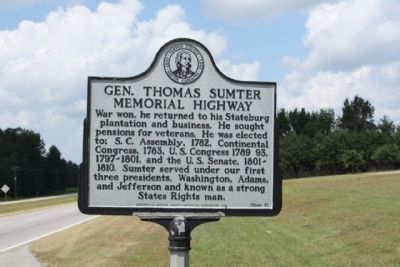 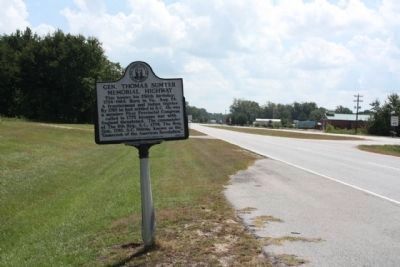 Photographed By Mike Stroud, September 7, 2010
3. Gen. Thomas Sumter Memorial Highway Marker, looking south along the highway
Cherokee, a Revolutionary War hero, planter, congressman and senator. A town, county, national forest and a fort in Charleston are named after him.
When he died on June1, 1832, Thomas Sumter was the last surviving officer of the American Revolution. 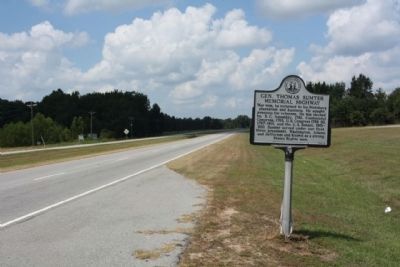