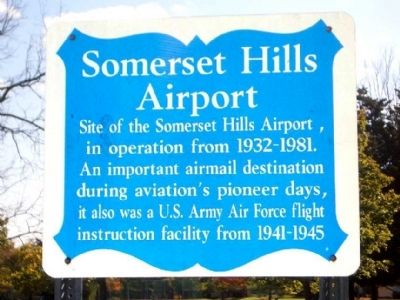 By Jan Wolitzky, circa 2008
1. Site of the Former Basking Ridge Airport Marker
Inscription.
Somerset Hills Airport. . Site of the Somerset Hills Airport in operation from 1932 - 1981. An important airmail destination during aviation's pioneer days, it also was a U.S. Army Air Force flight instruction facility from 1941 - 1945 . This historical marker is in Basking Ridge in Somerset County New Jersey

Site of the Somerset Hills Airport in operation from 1932 - 1981. An important airmail destination during aviation's pioneer days, it also was a U.S. Army Air Force flight instruction facility from 1941 - 1945

Topics. This historical marker is listed in these topic lists: Air & Space • War, World II. A significant historical year for this entry is 1932.

Other nearby markers. At least 8 other markers are within one mile of this marker, measured as the crow flies. Lord Stirling Estate (a few steps from this marker); Bernards Township War Memorial (about 500 feet away, measured in a direct line); Bernards Township Veterans Monument (approx. half a mile away); Lord Stirling Manor (approx. half a mile away); Site of Widow White’s Tavern (approx. 0.6 miles away); Lyons Station (approx. 0.8 miles away); Basking Ridge (approx. one mile away); a different

Click or scan to see
this page online
marker also named Bernards Township War Memorial (approx. one mile away). Touch for a list and map of all markers in Basking Ridge.
Credits. This page was last revised on June 16, 2016. It was originally submitted on October 1, 2010. This page has been viewed 798 times since then and 3 times this year. Photo   1. submitted on October 1, 2010. • Bill Pfingsten was the editor who published this page.
Share This Page.