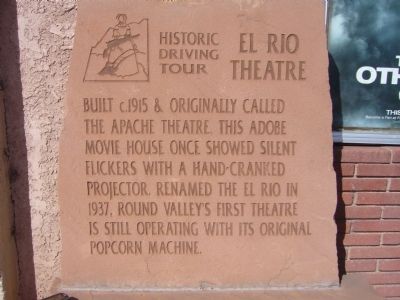 Photographed By Bill Kirchner, September 19, 2010
1. El Rio Theatre Marker
Inscription.
El Rio Theatre. . Built c.1915 and originally called the Apache Theatre, this adobe movie house once showed silent flickers with a hand-cranked projector. Renamed the El Rio in 1937, Round Valley's first theatre is still operating with its original popcorn machine. . This historical marker was erected by Round Valley Positive Action Tourism Committee and Springerville-Eagar Chamber of Commerce.. It is in Springerville in Apache County Arizona

Built c.1915 & originally called the Apache Theatre, this adobe movie house once showed silent flickers with a hand-cranked projector. Renamed the El Rio in 1937, Round Valley's first theatre is still operating with its original popcorn machine.

Topics and series. This historical marker is listed in these topic lists: Arts, Letters, Music • Notable Buildings. In addition, it is included in the Arizona, Pistols, Plows and Petticoats Historic Driving Tour series list. A significant historical year for this entry is 1915.

Other nearby markers. At least 8 other markers are within walking distance of this marker. Springerville World War I Memorial (about 300 feet away, measured in a direct line); Baldonado Home (about 400 feet away); James Hale Shooting 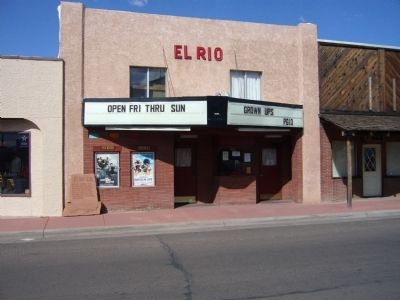 More about this marker. This is Marker Stop #20 on the Pistols, Plows and Petticoats Historic Driving Tour.

Regarding El Rio Theatre. Opened about 1915 as the Apache Theater and is thought to be one of the oldest motion picture houses in Arizona. Silent films made by flicking thousands of cards before the camera to convey animals and people in motion were shown here using a hand-cranked projector. Patrons sat on backless wooden benches.

Built of adobe, with double adobe walls on both sides, the theater withstood fires during the 1920’s that ravaged the street once known as “Chinatown.” There were no Chinese living in the town, however the street featured gaudy entertainment that a quiet, rural community thought belonged in a big city Chinatown. There were cafes, pool halls, a dance hall, and the theater. The double adobe walls saved the building but the roof burned, and some of the roof timbers still show charring on the edges.
Source: The Pistols, Plows and Petticoats Historic Driving Tour Brochure.
Credits. This page was last revised on June 16, 2016. It was originally submitted on September 29, 2010, by Bill Kirchner of Tucson, Arizona. This page has been viewed 1,133 times since then and 42 times this year. Last updated on October 1, 2010, by Bill Kirchner of Tucson, Arizona. Photos:   1, 2. submitted on September 29, 2010, by Bill Kirchner of Tucson, Arizona. • Syd Whittle was the editor who published this page.
Share this page.