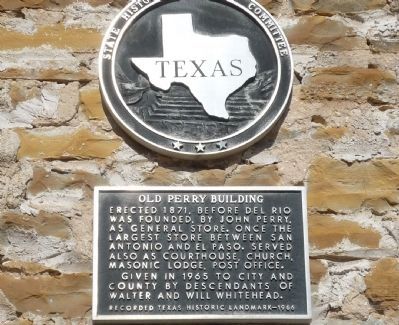 By Richard E. Miller, August 9, 2010
1. Old Perry Building Marker
Inscription.
Old Perry Building. . , Erected 1871, before Del Rio was founded, by John Perry, as general store. Once the largest store between San Antonio and El Paso. Served also as courthouse, church, Masonic lodge, post office., Given in 1965 to city and county by descendants of Walter and Will Whitehead. , Recorded Texas Historic Landmark - 1966 . This historical marker was erected in 1966 by State Historical Survey Committee. It is in Del Rio in Val Verde County Texas

Given in 1965 to city and county by descendants of Walter and Will Whitehead.
Recorded Texas Historic Landmark - 1966

Topics. This historical marker is listed in these topic lists: Industry & Commerce • Landmarks • Settlements & Settlers. A significant historical year for this entry is 1871.

Location. 29° 21.078′ N, 100° 53.886′ W. Marker is in Del Rio, Texas, in Val Verde County. Marker is on S. Main Street south of E. Duke Street, on the left when traveling south. Marker is on the west face of the Old Perry Building, above the entrance to the Whitehead Memorial Museum. S. Main Street is one block west of Pecan Street, and the museum is approximately one mile south of downtown Del Rio and W. Garfield Street (U.S. Hwy. 277). Touch for map. 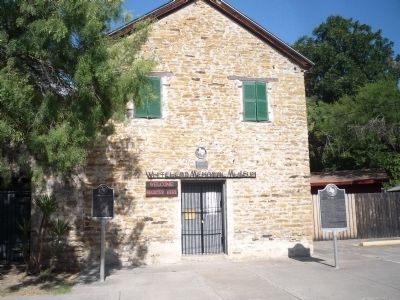 Click or scan to see
this page online
Marker is at or near this postal address: 3801 S Main Street, Del Rio TX 78840, United States of America. Touch for directions.