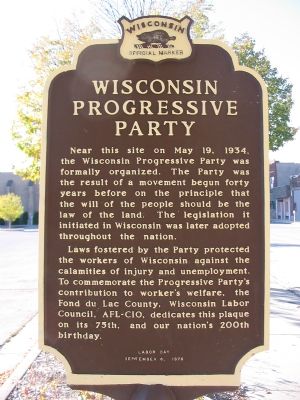 Near this site on May 19, 1934, the Wisconsin Progressive Party was formally organized. The Party was the result of a movement begun forty years before on the principle that the will of the people should be the law of the land. The legislation it initiated in Wisconsin was later adopted throughout the nation.

Laws fostered by the Party protected the workers of Wisconsin against the calamities of injury and unemployment. To commemorate the Progressive Party's contribution to worker's welfare, the Fond du Lac County, Wisconsin Labor Council, AFL-CIO, dedicates this plaque on its 75th, and our nation's 200th birthday.

Topics and series. This historical marker is listed in this topic list: Government & Politics. In addition, it is included in the Wisconsin Historical Society series list. A significant historical month for this entry is May 1863. 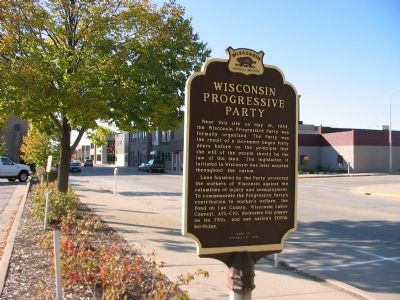 Click or scan to see
this page online
. Marker is on East 2nd Avenue east of South Portland Street, on the right when traveling east. Touch for map. Marker is in this post office area: Fond du Lac WI 54935, United States of America. Touch for directions.