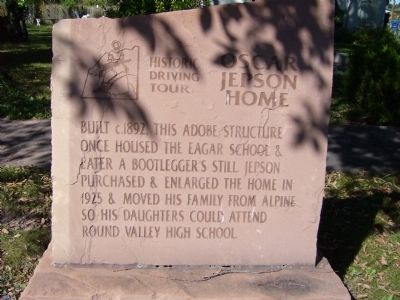 Photographed By Bill Kirchner, September 24, 2010
1. Oscar Jepson Home Marker
Inscription.
Oscar Jepson Home. . Built c.1892, this adobe structure once housed the Eagar School and later a bootlegger's still. Jepson purchased and enlarged the home in 1925 and moved his family from Alpine so his daughters could attend Round Valley High School. . This historical marker was erected in 2002 by Round Valley Positive Action Tourism Committee and Springerville-Eagar Chamber of Commerce.. It is in Eagar in Apache County Arizona

Built c.1892, this adobe structure once housed the Eagar School & later a bootlegger's still. Jepson purchased & enlarged the home in 1925 & moved his family from Alpine so his daughters could attend Round Valley High School.

Topics and series. This historical marker is listed in this topic list: Notable Buildings. In addition, it is included in the Arizona, Pistols, Plows and Petticoats Historic Driving Tour series list. A significant historical year for this entry is 1892. 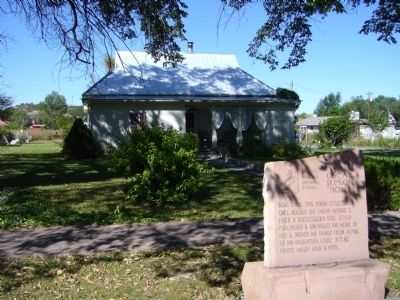 More about this marker. This is Marker Stop #12 on the Pistols, Plows and Petticoats Historic Driving Tour.

Regarding Oscar Jepson Home. One of the oldest homes in Eagar, this thick walled adobe building was built by the John Coleman family. It was constructed using forms and not bricks. The adobe mixture was poured into wall forms with rocks and wood added for strength. Originally, with only two small rooms and a fireplace, the adobe served as Eagar’s first schoolhouse.

Around 1925 Oscar Jebson, a farmer and rancher from Alpine, bought the home and moved in order for his four daughters to attend Round Valley High School. He added a frame addition to the rear of the house for a kitchen, pantry, bedroom and bathroom.

In later years, during Prohibition, bootleggers rented the building to run a still. Operating a still in the midst of a Mormon community was “the height of stupidity”. As soon as the neighbors smelled the corn mash cooking, they called the county revenue agents who shot it out with the bootleggers, leaving bullet holes in the bedroom walls.
Source: Pistols, Plows and Petticoats Historic Driving Tour Brochure.
Credits. This page was last revised on June 16, 2016. It was originally submitted on October 6, 2010, by Bill Kirchner of Tucson, Arizona. This page has been viewed 980 times since then and 58 times this year. Photos:   1, 2. submitted on October 6, 2010, by Bill Kirchner of Tucson, Arizona. • Syd Whittle was the editor who published this page.
Share this page.