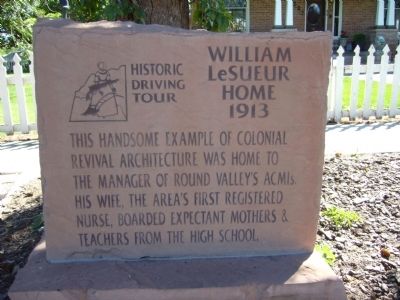 By Bill Kirchner, September 24, 2010
1. William LeSueur Home Marker
Inscription.
William LeSueur Home. This handsome example of Colonial Revival architecture was home to the manager of Round Valley's ACMIs. His wife, the area's first registered nurse, boarded expectant mothers & teachers from the high school. . This historical marker was erected in 2002 by Round Valley Positive Action Tourism Committee and Springerville-Eagar Chamber of Commerce.. It is in Eagar in Apache County Arizona

This handsome example of Colonial Revival architecture was home to the manager of Round Valley's ACMIs. His wife, the area's first registered nurse, boarded expectant mothers & teachers from the high school.

Topics and series. This historical marker is listed in this topic list: Notable Buildings. In addition, it is included in the Arizona, Pistols, Plows and Petticoats Historic Driving Tour series list.

Other nearby markers. At least 8 other markers are within walking distance of this marker. Harry Colter Home (about 400 feet away, measured in a direct line); Brawley Boarding House (approx. 0.2 miles away); Joseph Udall Barn (approx.

More about this marker. This is Marker Stop #16 on the Pistols, Plows and Petticoats Historic Driving Tour.

Regarding William LeSueur Home. William F. LeSuer, W.F. as he was known, came to Round Valley in 1891 to manage the Springerville store of the Arizona Cooperative Mercantile Institution (ACMI). He and his family lived in a large adobe home that would eventually become the Saffell Hotel.

In 1911 he began building a large brick home with the help of his sons. They dug a six-foot deep basement with pick and shovel and hauled sandstone blocks from the El Tule south of St. Johns for the foundation walls. The bricks for the Colonial Revival house were locally manufactured. In 1913 he moved into this house.

The house had three small bedrooms downstairs plus a parlor, dining room, kitchen and bathroom, for which water for baths was hauled from a well for baths. Upstairs there were four large bedrooms with walk-in closets. There was a root cellar, 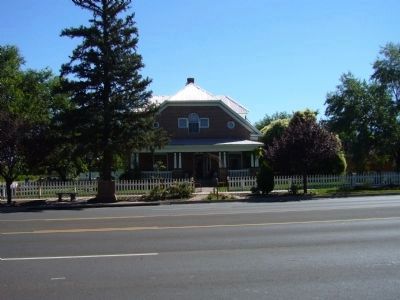 By Bill Kirchner, September 24, 2010
3. William LeSueur Home
Marker is under the large pine tree at the left.
a large unfinished attic and full verandas front and back. Today the home still has its original wooded floors, front stained glass windows and ornate hardwood banister.

W.F.’s first wife died in 1911 and in 1915 he married Elina Hansen. She was a registered nurse and served the community as a mid-wife, delivering many babies both at this house and in the family homes of Round Valley. They also rented two of the small downstairs bedrooms to teachers from Round Valley High School.